In the post below, I’ll walk you through the recipe, ingredient modifications, and tips for using an Instant Pot or other cooking methods in case you don’t have a Foodi in your kitchen. And you’ll find a printable recipe card at the end of the post if you’re familiar with the Foodi and all its functions and want to get cooking! 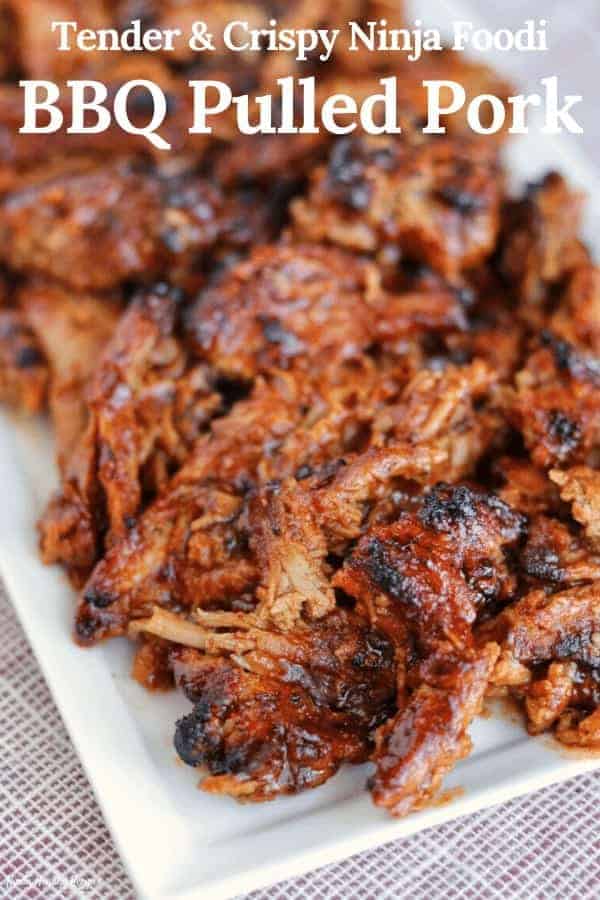 How to Make Pulled Pork in the Ninja Foodi

You can break the recipe down into 5 simple steps: 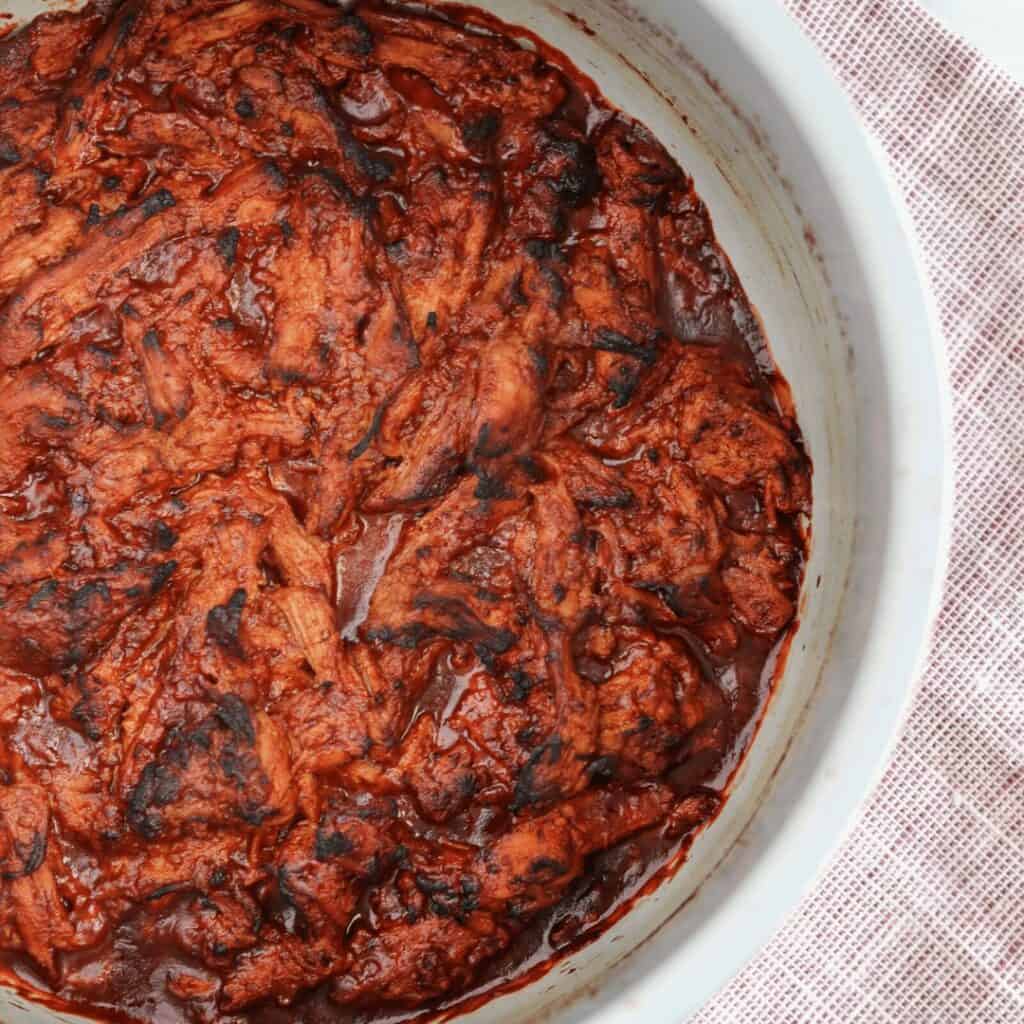 I used zero-calorie Swerve Brown for the brown sugar. It’s only a tablespoon so the real deal is perfectly fine if that’s all you have on hand.

The recipe calls for a tablespoon of olive oil rubbed on the pork tenderloin before adding the rub. This is an important step for a few reasons:

For a twist on the seasoning of your pork, you could use the seasoning blend and hot sauce glaze from our Traeger Smoked Pork Tenderloin.

Step 2: Sear Both Sides of the Pork Tenderloin

Set the Foodi’s sauté function to HI and let the pot heat up. Once the pot is hot, add the pork tenderloin and cook for 2 minutes before flipping and cooking an additional 2 minutes.

The photo on the right above shows what the pork tenderloin should look like after the first 2 minutes. If you notice your pork hasn’t developed a crust quite yet, the pot was probably still heating up. No worries—just cook it a bit longer!

On the time range, 10 minutes should do the trick for a longer, thinner tenderloin. The 12-minute cook time will be ideal for shorter, thicker tenderloins to make sure it cooks through in the center.

You want to make sure the pork is fully cooked to an internal temperature of 160-165F at its thickest point without over cooking. If your tenderloin is difficult to shred, it’s likely over cooked so reduce the cook time on your next run.

Transfer the cooked pork tenderloin to a bowl to rest and turn the Foodi’s sauté function on HI. Don’t shred the pork tenderloin right away. Letting it rest while the remaining liquid thickens will allow the proteins in the pork to relax, making it easier to shred and keeping juices inside the meat instead of the bowl.

Once the sauce thickens and will leave a trail if you drag a spatula through it, turn the sauté function off and shred the pork tenderloin with forks or meat claws. I have the claws I use on my Amazon storefront, in case you’re interested.

Toss the pulled pork in some of the same bbq sauce you added to the chicken broth mixture and go back in the pot with the reduced sauce.

Note: If your remaining sauce is taking a while to thicken, you can add a 1:1 corn starch slurry like I used for my Ninja Foodi Pot Roast.

Give the pulled pork a stir in the sauces and close the Foodi’s air crisping lid. Turn on the broil function for 10 minutes. You can extend the time by 3-5 minutes to get extra crispy pulled pork.

And that’s it. You’re ready to serve!

How can I double the recipe?

I tested this BBQ pulled pork by doubling the pulled pork rub and olive oil for an extra 1-pound pork tenderloin. I seared both for the same time and used the same amount of chicken broth, bbq sauce, and hot sauce.

For pressure cooking, I tested 15 minutes and both tenderloins were between 170-180 degrees. So, I’d bet 12-14 minutes would be perfect.

I did notice two pounds of pork created more juices in the Foodi after pressure cooking. So I only added an extra 1/4 cup of BBQ sauce to the original 1/2 cup in the shredded pork. 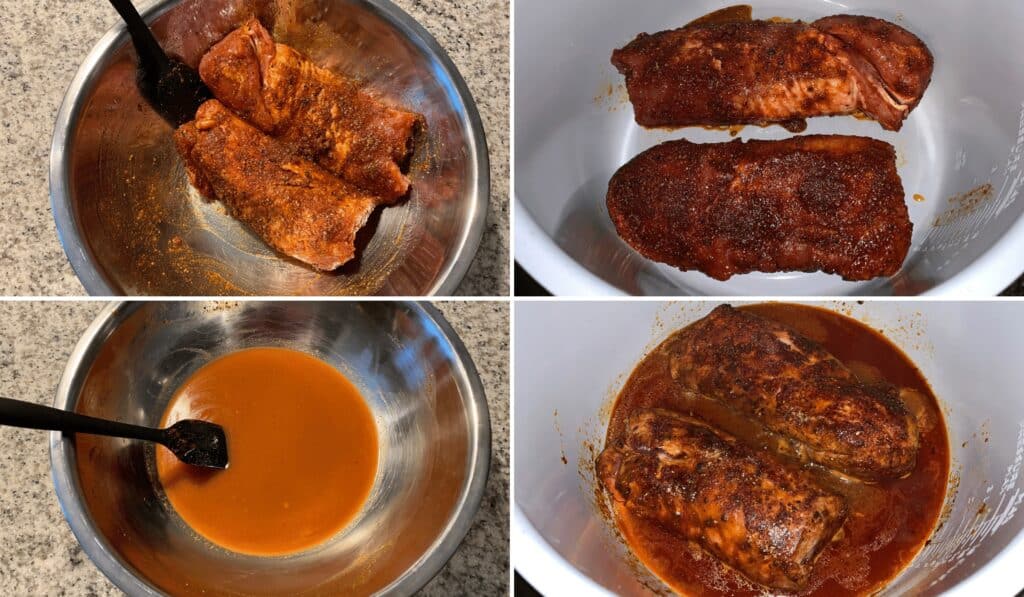 You can see another tip in the photos above—adding the pork tenderloins to a bowl for the oil and rub application step. Then mixing the chicken broth, bbq sauce, and hot sauce in the same bowl to make sure no flavor is left behind!

Since there’s a bit more pulled pork in the Foodi pot, you may want to stir a few times during the broiling process for even crisping. You could also broil in batches.

Can I make this pulled pork in a slow cooker?

You bet. I would still recommend searing both sides of the pork tenderloin in a large skillet before adding to a crockpot with the chicken broth, all of the bbq sauce, and hot sauce. Cook on low for 3-4 hours, high for 2-2.5 hours, or until the pork tenderloin reaches an internal temperature of 165F at its thickest point.

Can I use an Instant Pot?

Totally. Follow the recipe as-written and if you’re using a 6-quart Instant Pot, I’ve found it to have nearly identical pressure cook times to the Ninja Foodi.

For example, my Mexican shredded chicken thighs recipe had identical cook times in both the Foodi and Instant Pot.

How do I make crispy pulled pork without a Ninja Foodi?

Whether you use an Instant Pot or slow cooker, you can transfer the pulled pork after shredding and reducing the remaining liquid to an aluminum foil lined baking sheet and use your oven’s broil function for 3-5 minutes like I did in my pineapple chipotle crockpot chicken recipe. Extend the time as needed. 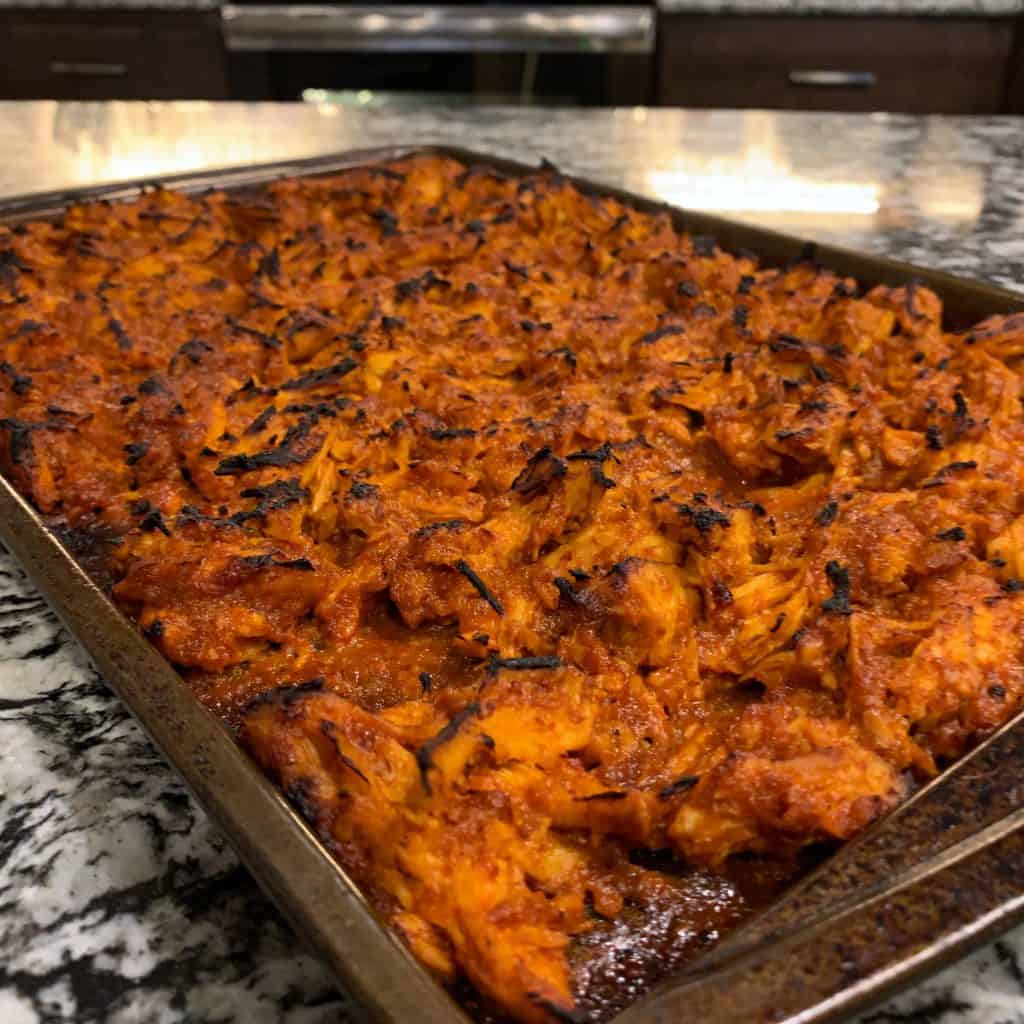 Don’t be like me. Aluminum foil makes clean up much easier!

Does it matter which BBQ sauce I use?

Nope, use whatever you want! The G Hughes sugar free BBQ sauce I used in my crispy brussels sprouts with bacon is a great lower calorie option.

Could I use this recipe to make BBQ pulled chicken?

You could oil and season chicken breasts or thighs and cook exactly the same way. Though you’ll probably want to reduce the cook time since the chicken will be a bit thinner and quick cooking than pork tenderloin.

Update: My pulled Instant Pot BBQ chicken thighs recipe calls for 2-3 minutes per side followed by a 5-minute pressure cook.

Have additional questions about this Ninja Foodi Pulled Pork Recipe? Drop a comment below or join my free Facebook group to get some help from the 17k home cooks there.

*Use 10 minutes for long, thin tenderloins and 12 for shorter, thicker tenderloins. If the pork hasn't reached 165F in the center at the end of cooking, you can seal and cook for a few extra minutes.

Very good recipe!! However, it took about 45 minutes to cook in my pressure cooker. The tenderloin was only 1.13lbs so I’m not sure why, but I’ll definitely be cooking this again!!

I have a 4lb pork loin to use in the pressure cooker. Should I go closer to 30 minutes on high in pressure cooker with a quick release? Or should I cut it in half? I did the rub on it last night....We want pulled pork so I don't want to over cook it.

That's 10-12 minutes after the pressure cooker comes up to pressure.

I will never cook pork using a different recipe again. My entire picky-eating-family loves this recipe. Makes great leftovers and can used in soooo many different ways!

I'm making this tonight. A temp of 165F seems "well done" for a pork tenderloin. According to Google, 145F is the idea temp for pork because when you overcook it is dry. I may try playing around with it. I'm a newbie home cook, so definitely not an expert. Just wondering if 165F was too tough/dry for anyone else?

It's up to you! If you're planning to shred and broil anyway, food safety won't really be a concern. That said, I've never had any issues with pulling/shredded or toughness when cooked to 165ºF with this one.