Put your leftover pulled pork to good use with this cast iron pizza. We’re looking at a thin and extra crispy Greek yogurt pizza crust topped with BBQ sauce, diced red onion and jalapeño, mozzarella cheese, and of course—pulled pork.

If you’ve never made your own pizza dough before, have no fear, this dough calls for 3 ingredients and can be made entirely in a food processor! I’ll run you through the recipe below and cover ingredient modification tips as we go. You’ll find a printable recipe card at the bottom of the post as well. 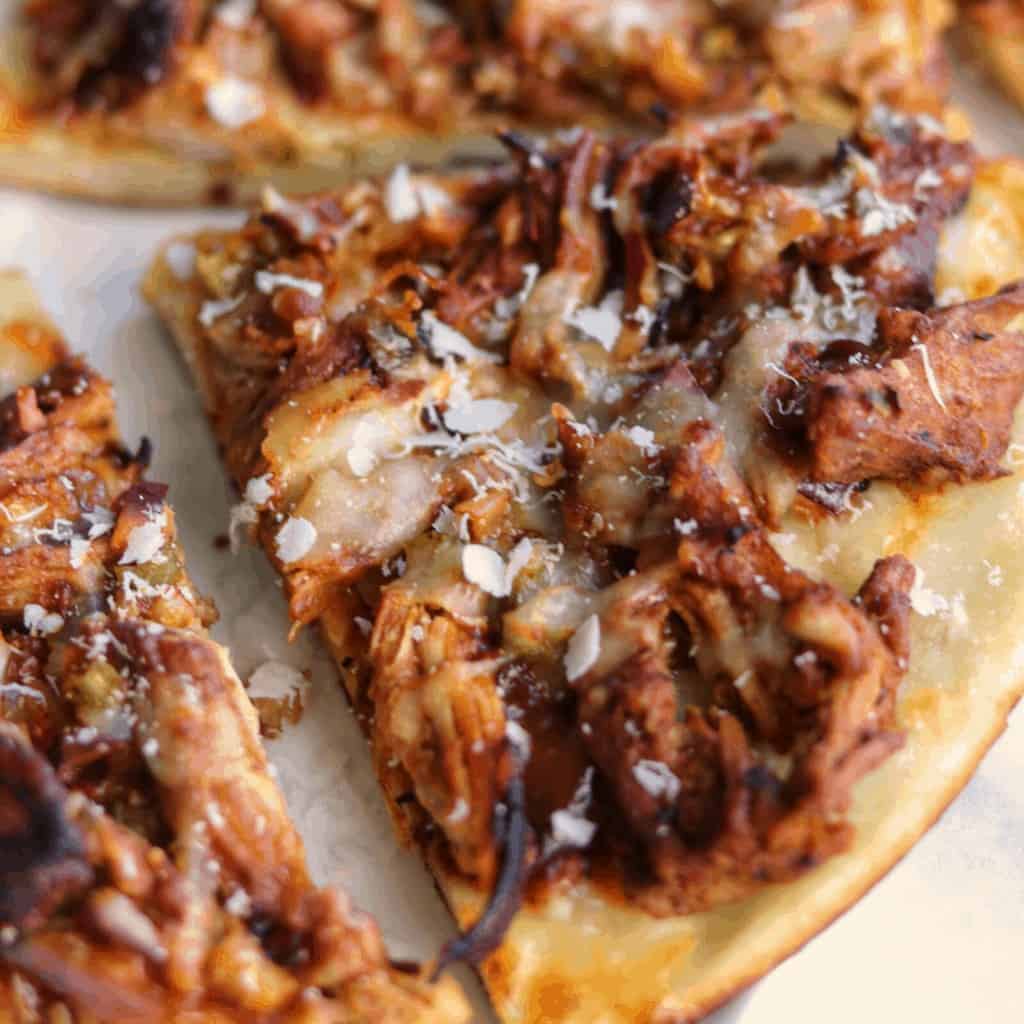 The only thing to be aware of is my recipe being cooked with a generous amount of BBQ sauce. So if you’re using a dry pulled pork, you may want to use more BBQ sauce, but we’ll get to that. Let’s talk dough first.

All purpose flour, kosher salt, and fat free Greek yogurt—that’s it. Throw it in a food processor and give it a few pulses before working with your hands to form pizza dough.

If you don’t have a food processor, you can use a stand mixer or simply a bowl and fork like I use in my low fat air fryer pizza recipe. Unlike the air fryer pizza, however, this crust is meant to be thin without much rise at all. So over working the dough isn’t nearly as big a risk here. Mix away.

You should be able to use your hands to stretch the dough, but you could also use a rolling pin. If you follow the recipe as written, handling the dough should be a breeze. But if you get tricky with ingredients and have a sticky dough, flour your hands or spray them with a bit of cooking spray to make life easier.

You can really use whatever you want on your pizza. I tested a few different variations and found 9 ounces of pork to be the sweet spot. You don’t want to go crazy with the meat or you might have trouble cutting the pizza and/or a soggy top of the crust.

I went with shredded mozzarella and grated a bit of fresh parmesan on top after, but you could add a bit of parmesan to the crust before baking. That gives the crust an extra golden brown crust.

In the off chance you wanted to use chicken instead of pork, check out my Instant Pot BBQ pulled chicken recipe.

How to Cook a Cast Iron Pizza

Here are the high points of making a cast iron pizza:

It’s pretty darn easy, but it may take a few trial runs to get it just right. I’ll cover some troubleshooting tips below. 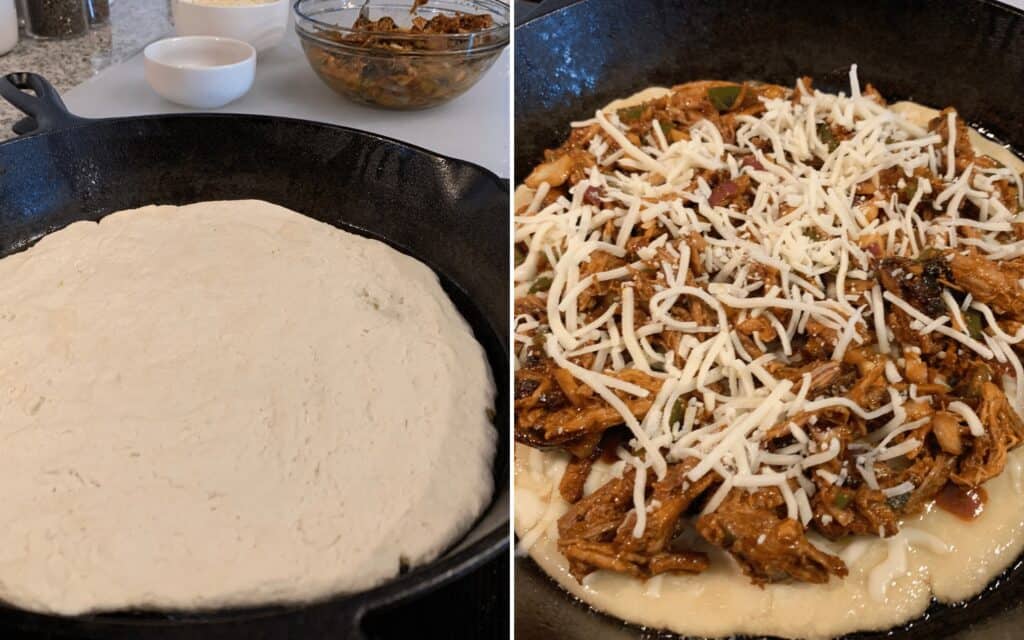 My original cast iron pizza recipe includes a video tutorial if you need some extra help!

The two most common issues with cast iron pizza seems to be either burning the bottom (too much heat) or a slightly doughy crust (not thin enough or too little time in the oven). Fix those and you’ll have a perfect pizza! 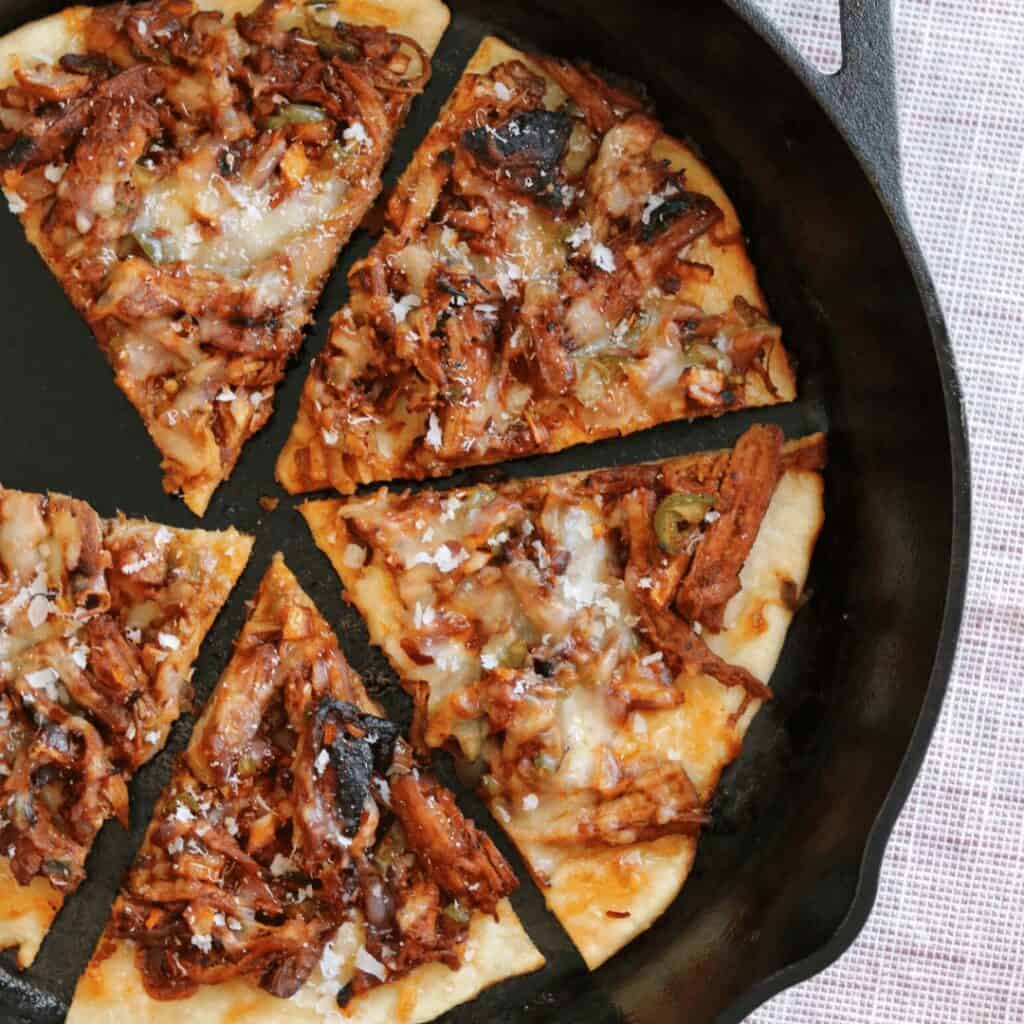 That should cover it! If you have any questions about this pulled pork pizza, feel free to leave a comment below. You can join my free Facebook group and get some help from the 10k home cooks there as well.

Each slice of pulled pork pizza has 5 Smart Points.

This was my first attempt at 2 ingredient pizza dough, and WOW was i impressed. The method described here results in the perfect, chewy yet crispy and perfectly browned crust. I made the ninja foodi pulled pork and used it for this recipe, but I will be using this dough far more often than that. Though delicious, next time I will add spices to the dough depending on what it's purpose is for, like ranch seasoning or garlic and onion powder to make it a bit more flavorful. If you have macros to spare, parmesan would probably make a wonderful addition!