This crispy carnitas recipe is one of the best meal prep recipes on my blog. You can make tacos, burritos or bowls, nachos, salads, and all kinds of dishes with this Mexican pulled pork.

Every serving is packed with flavor and 24 grams of protein with just 4 grams of carbs, 6 grams of fat, and 3 WW Smart Points. That leaves tons of room for tortillas, cheese, and other fixin’s! 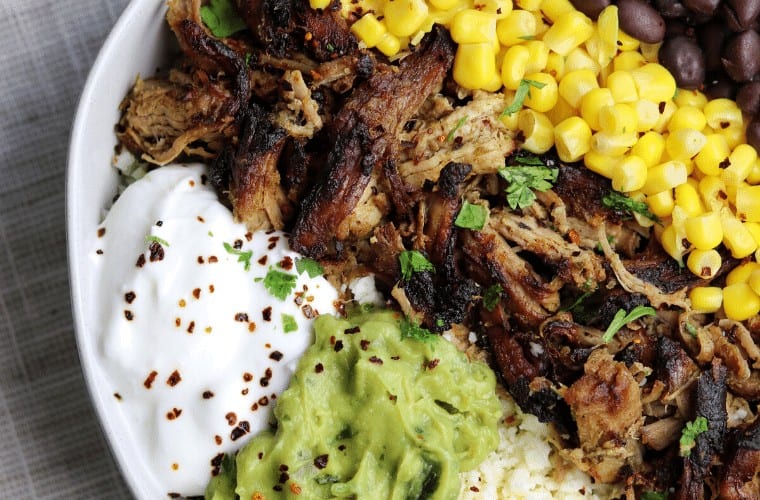 Thanks to the Foodi, this is an easy recipe that stays in one pot aside from a little prep and shredding the pork. And the ingredient list is a simple one so I doubt you have many questions. Still, I’ll touch on any potential ingredient modifications as we go.

You can do this in a bowl like the recipe calls for or by hand on a cutting board like I initially did with my Ninja Foodi bbq pulled pork recipe. I think I like the bowls better because you can add what I’m calling a flavor potion in step 2 to make sure no oil or spices go to waste.

It’s also a great way to keep your hands clean!

Here’s what you’ll need for the carnitas seasoning:

The only notes I’d add here would be on the salt and cinnamon. If you’re using table salt as opposed to kosher salt like the recipe calls for, you’ll want to cut it in half. And if you’re wondering about the cinnamon, just trust me. (But yes, you can leave it out.)

I know lots of my readers love simplicity and appreciate shortcuts. So, I figured this route would alleviate any need for chopping veggies and work loads of flavor into the recipe all at once.

Add the following to a food processor:

If you don’t have broth on hand, you can use water. And if you’re a cilantro hater, just leave it out!

Step 3: Sear the Pork Tenderloin with the Foodi’s Sauté Function

That’s it for ingredient prep. Now it’s time to cook.

The only thing you can mess up in this step is not letting the pot heat up enough before adding the pork tenderloin. You can flick a little water in the pot to test the heat. If it sizzles, you’re probably good to go.

Sear each side of the pork tenderloins for 2 minutes. Nothing fancy here.

Pour the blended ingredients into the pot around the edges and move the pork around to fully coat the bottom of the pot. Seal and cook with high pressure for 12-14 minutes.

I hate to give a time range, but every pork tenderloin (and user) is different. If you have a food thermometer and the pork hasn’t reached an internal temp of at least 160F, you can seal and cook for another minute or two.

Note: If you want to make a smaller batch with just 1 pork tenderloin, follow the recipe as written but cut the chicken broth in half. The cook time should be about the same.

Step 5: Reduce the Remaining Liquid while You Shred the Pork

Like I mentioned in my buttermilk pan fried chicken breast recipe, letting your proteins rest for at least 5 minutes after cooking is always a great idea. Even though you’ll be mixing the pulled pork back in the remaining liquid before broiling, letting the meat rest will make shredding much easier.

As for reducing the remaining liquid, you want carnitas, not pulled pork soup. It doesn’t have to be a flawless sauce, just reduce it long enough to thicken. If you let the pork rest and then shred (about 8-10 minutes total), it should be perfect timing. 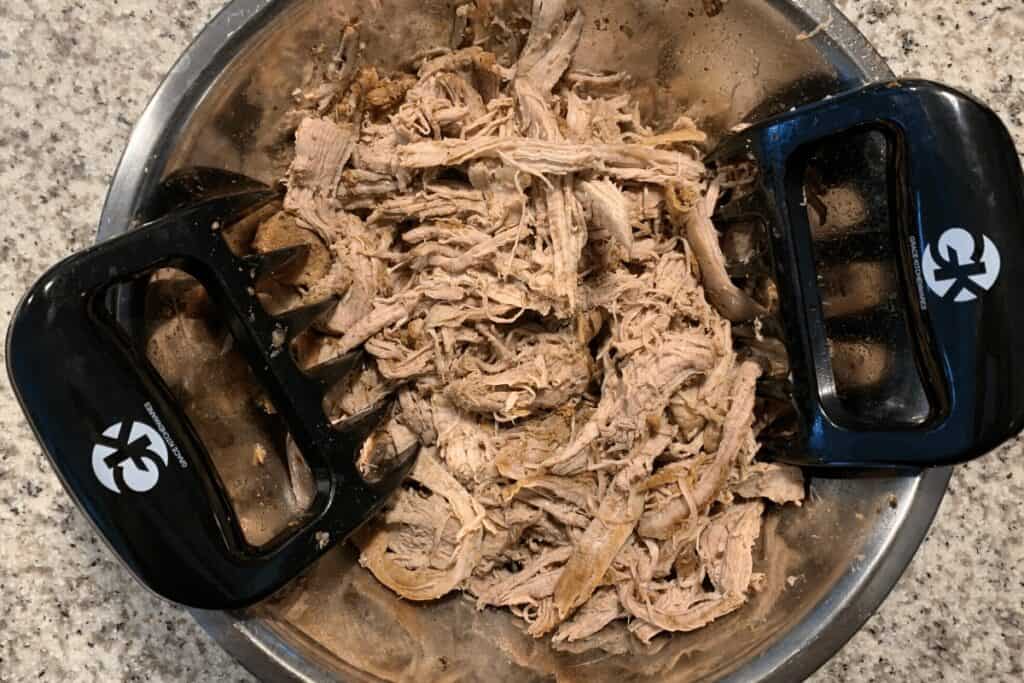 You can find the meat claws I use, along with all my other recommended kitchen equipment, on my Amazon storefront. Other shredding options include the classic two fork method or a stand mixer with a paddle attachment.

Step 6: Use the Foodi’s Broil Function to Make Crispy Carnitas

This is an optional but highly recommended step. Not only does it create crispy edges, the pork soaks up all the remaining juices during broiling. I did it for the BBQ pulled pork I mentioned earlier as well as my Ninja Foodi Greek chicken breast, and I’ll probably continue doing it for every protein I prep in the Foodi.

If you want even crisping, you can stir halfway through or broil in two batches.

If you’re using an Instant Pot or slow cooker, you can transfer the pork to a baking sheet lined with aluminum foil and use your oven’s broil function.

How to Serve Your Crispy Carnitas 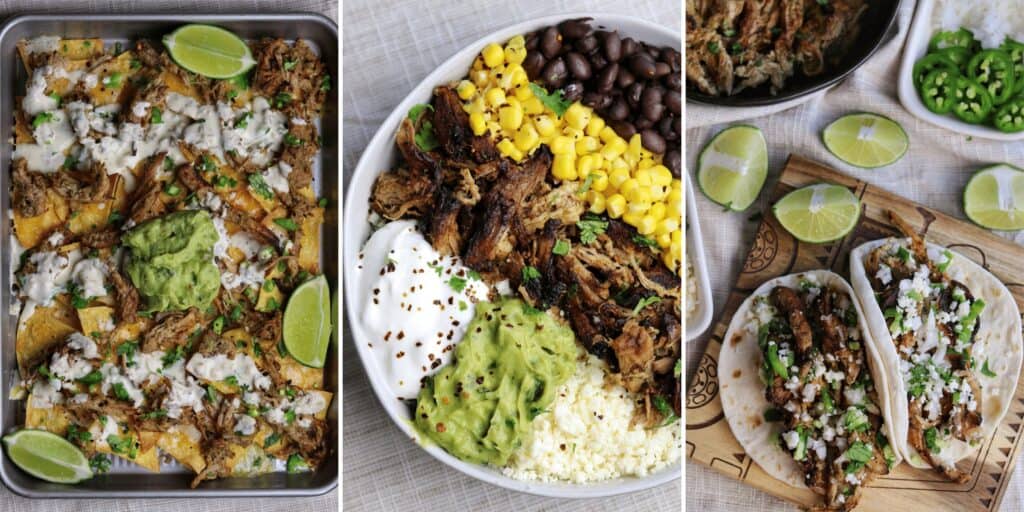 Let me know what you end up doing with your pork tenderloin carnitas! Snap a pic and tag me on Instagram @mason_woodruff or share it with my Facebook group.

**If you're using an Instant Pot, use the sauté function to reduce the sauce before mixing with the shredded pork tenderloin. Add the pork to a baking sheet lined with aluminum foil and use your oven's broiler to make crispy carnitas.

Sear the pork tenderloins in a large skillet and cook in a crockpot on low for 3-4 hours or high for 2-3 hours. Once the pork reaches an internal temp of 160F, transfer to a bowl to rest/shred. Transfer the remaining liquid to a saucepan over high heat to reduce to a sauce. Toss the pulled pork in the sauce and crisp on a baking sheet under your oven's broiler, if desired.

Absolutely love this recipe. As others mentioned, it’s the perfect introduction to the Ninja Foodi.

I served the carnitas with guacamole, tortillas, Mexican Street corn and beans. Yum!

I know this was not at all the intent of the recipe, but I used the seasonings and cooking technique with a "family pack" of boneless, skinless chicken thighs that I HAD to cook last night, and it turned out scrumptious. I used the Ninja Foodi, 12 minutes on Hi-Pressure--perfect. Because I like saucy, chunky foods, I didn't even bother with putting the garlic, onion, cilantro, orange in the blender. I just minced all of them really small, threw them in, coated the chicken in the mixture, and proceeded with the pressure cooking. I served the chicken over rice with vegetables, spooning a little of the sauce over each bowl. I will make this again soon!

My kids absolutely love this dish! I make it often. Thanks for sharing!!

This was so good! I made it tonight and followed the directions and it was almost perfect. For me, it was just missing a little bit of heat… So prior to crisping in the oven I added some Serrano pepper powder! Thank you for another incredible recipe Mason!!!

No idea what I did differently (nothing, I followed the recipe to a T), but I was very unimpressed. The meat had little flavor and was not shreddable after 14 minutes in the instant pot. I had to use my mixer to do that part. I didn’t find the sauce to have much flavor, either. 🤷🏻‍♀️ I think it would be better if it were marinated and then slow cooked.