This cast iron brussels sprouts recipe is your best bet at converting the sprouts haters in your life to the dark side. They’re crisped in bacon grease and cooked with red onion, roasted corn, walnuts, tossed in a cranberry BBQ glaze, and topped with freshly grated pecorino.

I’ll run you through the recipe and cover ingredient modifications below. And you can find the printable recipe card for these crispy cast iron brussels sprouts at the bottom of this post. 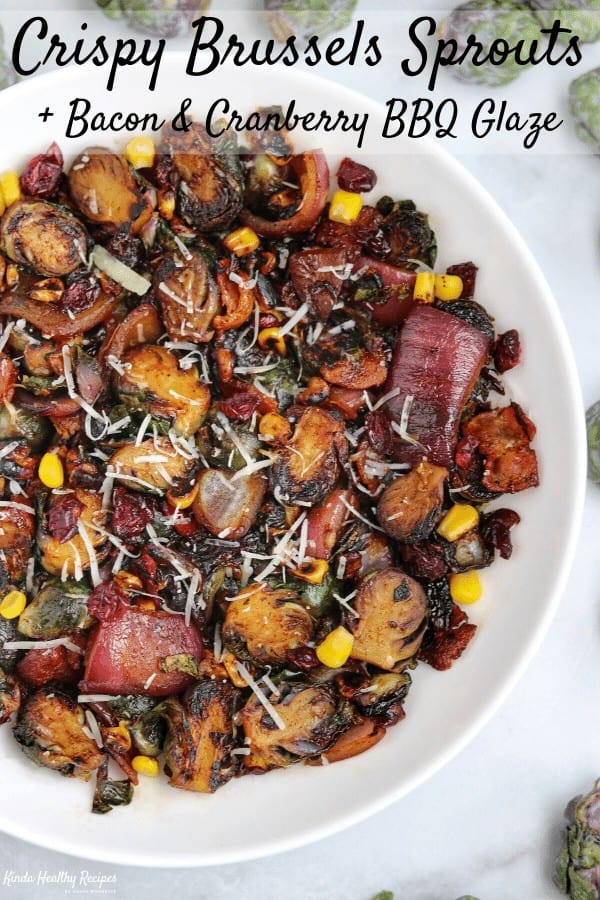 This is a simple, fast-cooking recipe so it’s best to have everything ready to go before you start cooking.

Once your Mise en Place (everything in its place) is taken care of, it’s time to cook the bacon. Like I mentioned in my loaded ground beef and potatoes skillet, slicing the bacon prior to cooking is my preferred method. I find the bacon cooks faster and gets evenly crispy.

Totally optional, though! Throwing it straight in will save you some raw meat handling.

Once the bacon cooks, transfer it to a paper towel and carefully add the brussels sprouts, onion, corn, and walnuts. Give it a stir and leave it alone for a few minutes to keep the contact with the cast iron skillet and develop some color.

You can stir occasionally and position the brussels sprouts cut side down on the skillet for optimal crispness. This should take about 6-8 minutes but feel free to go longer if you want them extra extra crispy.

Extra crispy note: If you know you want extra crispy brussels sprouts, you might put them in the skillet on their own for a few minutes before adding the onion, corn, and walnuts. Since the latter will cook faster, you don’t want to burn them in the process of getting crispy sprouts.

Once the veggies are done, so are you. Well, almost.

Just add the BBQ sauce, dried cranberries, and cooked bacon. Give it a stir and be sure to get any crispy bits off the bottom of the pan before topping with some freshly grated pecorino.

Deglazing note: If you’re using a stainless steel pan or have lots of sticking on the bottom of the pan, you can use a bit of apple cider vinegar (or any vinegar, broth, water, etc.) to help deglaze the pan and get those crispy bits back into the mix.

If you wanted to make your own sauce, check out my balsamic BBQ brussels sprouts and sweet potatoes recipe.

Feel free to modify ingredients as you see fit. You can’t really mess anything up.

The only modification that might create the need for something else would be the bacon. If you omit the bacon, add a bit of olive oil (maybe 1/2-1 tablespoon).

Other than that, you should be good to go. If you have a question about these cast iron brussels sprouts, leave a comment below or join my Facebook group with more than 10k healthy home cooks that would love to assist you!

Each serving of brussels sprouts has 3 Smart Points.

*I used a bag of washed and trimmed fresh brussels sprouts. If you use frozen, microwave for about half the time listed on the packaging before halving.

**I used Trader Joe's frozen roasted corn, but you can use any frozen corn. You can also use well drained corn from a can.

These are fantastic! I made them as a practice run before serving for Thanksgiving. I used turkey bacon because that’s what I had on hand and it was fantastic!