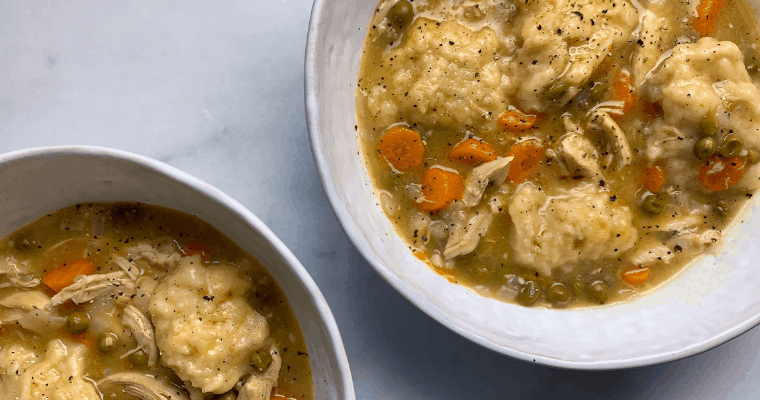 And if you’re intimidated by the thought of making your own dumplings, chill. There’s zero dough rolling required. Just mix a handful of ingredients together and pinch pieces of the dough off to throw in the chicken soup. Seriously, it’s super easy! 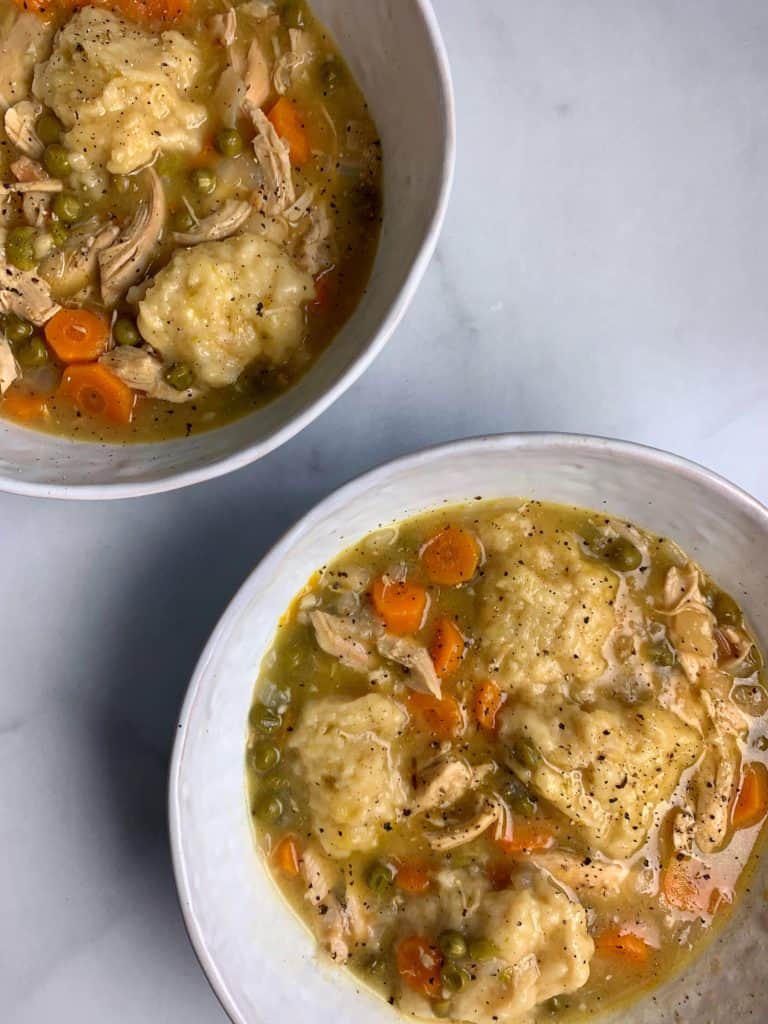 There are two groups of ingredients—the chicken soup and the dumplings.

While you’ll want to stick to the dumplings recipe as closely as possible, you can take liberties with the chicken soup. Here’s everything you’ll need for the soup with a few notes:

*For an example of using frozen vegetables, check out my crescent roll chicken pot pie. 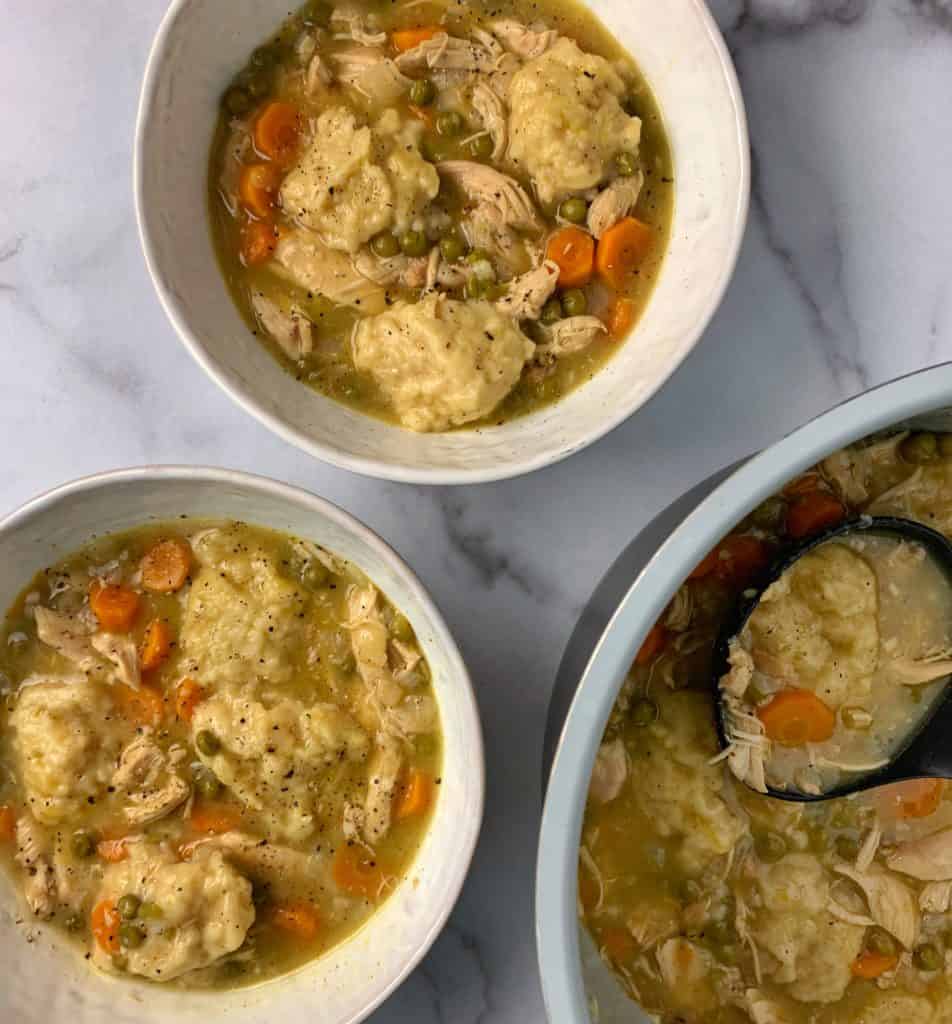 It’s really tough to mess up on the chicken soup portion of this recipe. Don’t sweat it if you’re missing an ingredient or want to make a substitution.

I’ll also add that the seasoning blend was inspired by my chicken breakfast sausage recipe that people seem to really love. So get some of those ingredients in if you can!

How to Make the Chicken Soup

The most difficult part of this recipe will be vegetable prep (and I guess removing the chicken meat). If you wanted to use precut veggies, I wouldn’t judge.

After you’re prepped and ready to go, it’s smooth sailing. Simply cook the onion and carrots in a bit of olive oil until they’re soft.

Side note: You’ll notice I used a Ninja Foodi for to make my chicken and dumplings, which is a pressure cooker (like an Instant Pot), slow cooker, and an air fryer all-in-one. I love this piece of equipment, and you can check it out on my Amazon list if you want to learn more. That said, you can definitely make these chicken and dumplings on the stovetop.

Then add the garlic and other dry seasoning. Cook that for about a minute until fragrant and add the chicken, broth, soup, and bay leaves.

Stir and bring to a boil while you prepare the dumplings.

How to Make the Dumplings

If you thought the biscuits were easy, these dumplings are even easier since you don’t have to form the dough into anything. Just make a big ol’ ball of dumpling dough and divide it into small pieces.

Note: I used a stand mixer (also on my Amazon list) to mix the dumpling dough, but you can use a food processor like I did for my cast iron pizza or by hand.

Just to reiterate on the chicken soup portion—you can make just about any substitution.

Want a creamier soup? Use an extra can of cream of chicken or reduce the amount of chicken broth used.

Want to use cubed chicken pieces instead of shredded? Do it. 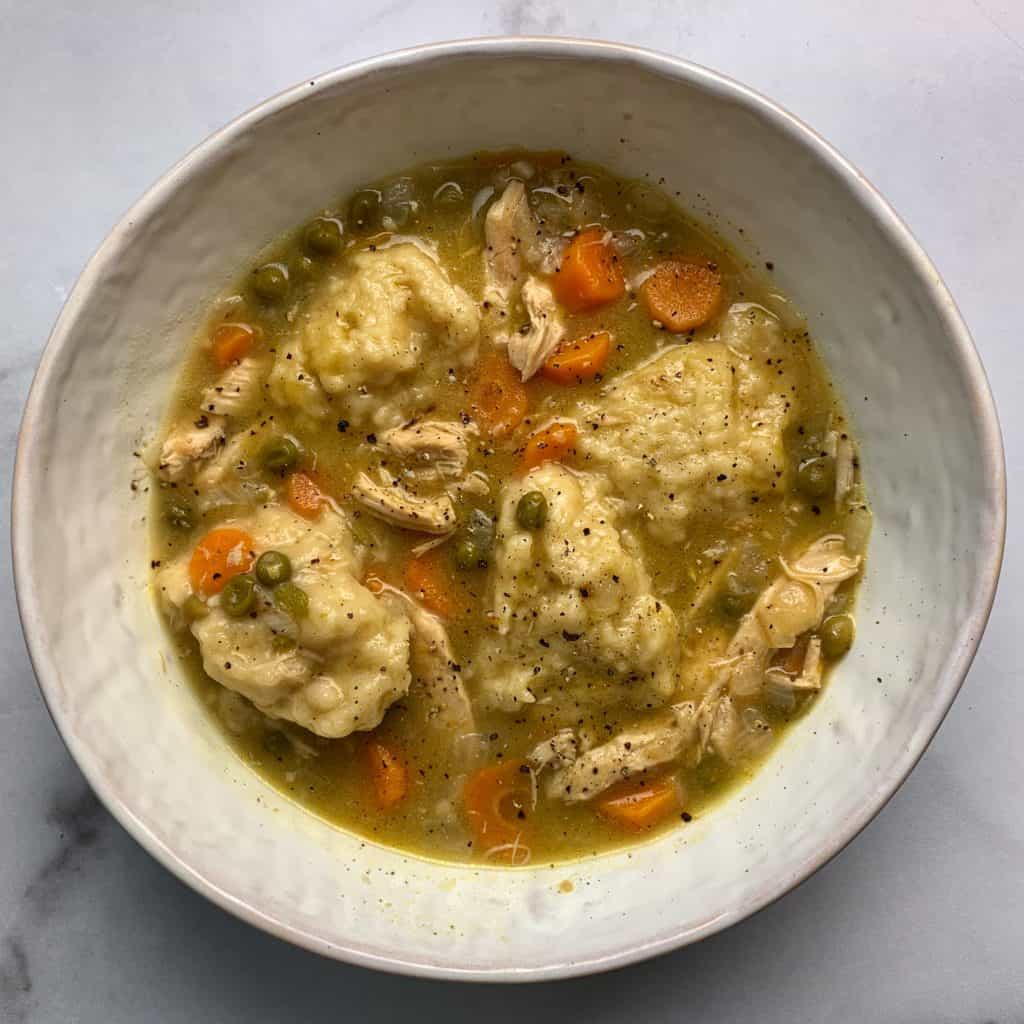 Have fun! Just be sure to let me know what you think about your chicken and dumplings!

For the Chicken Soup

Each serving of chicken and dumplings has 5 WW Smart Points.

47 thoughts on “Southern Chicken and Dumplings with Rotisserie Chicken”