I’d like to personally guarantee this cast iron pizza will be one of the best homemade pizzas you’ve ever made. And for a pizza made with Greek yogurt pizza dough, that’s really saying something!

Seriously, the crust is crispy golden brown with just the right amount of chew around the edges of the crust. I’ve included instructions in the recipe for a veggie pizza, but you can take this cast iron pizza crust and run with it in any direction you choose. 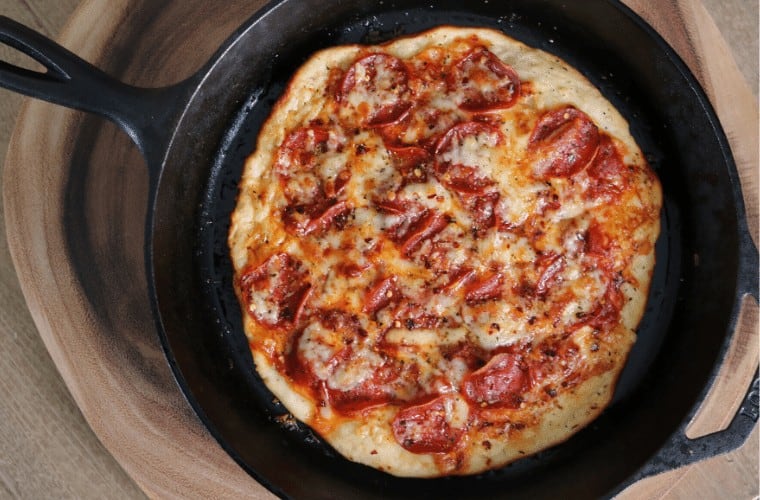 Okay, this technically isn’t the classic 2-ingredient pizza dough because I’ve added a pinch of salt and garlic powder. But at its core, the pizza dough is made from good ol’ all purpose flour and fat free Greek yogurt.

You can use a mixing bowl and fork, food processor, or stand mixer to bring the dough together. 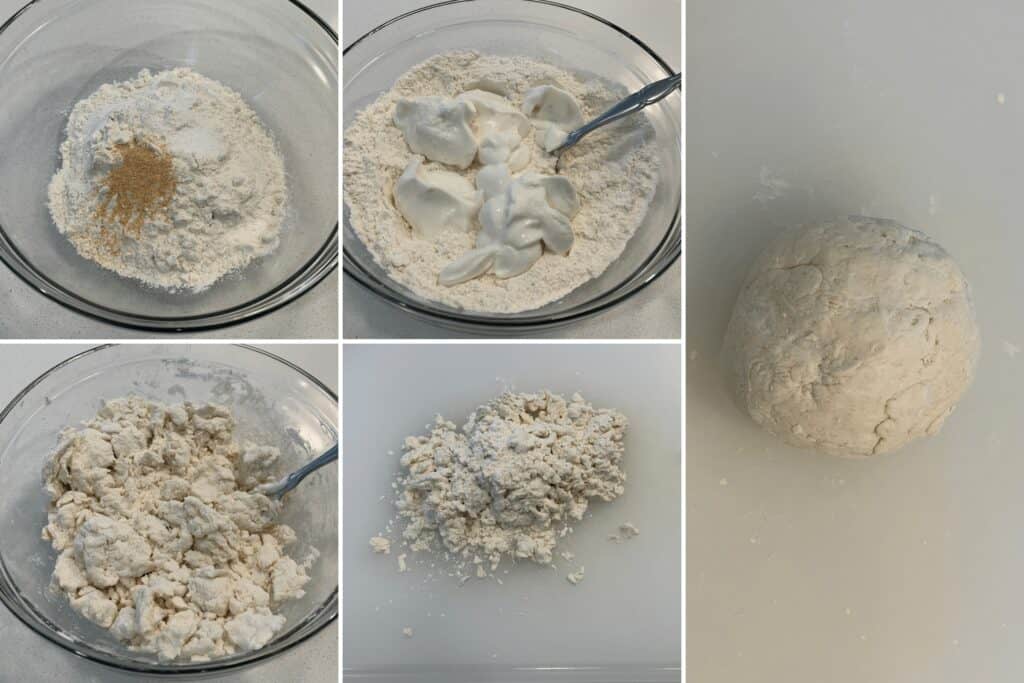 Unlike my monkey bread pizookie, you don’t have to worry as much about overworking the dough since this is a thin crust pizza. Though if you just mix it to death, your crust might be a little chewy.

Regardless of mixing method, aim to leave the dough a little crumbly and finish bringing everything together with your hands. You should be able to easily handle the dough. If not, your ingredient measurements are probably off somewhere. Get a food scale!

Going from Dough to Crust

For this cast iron pizza, the dough will roughly go all the way to the pan’s edges. So use that for size reference when forming your pizza dough. 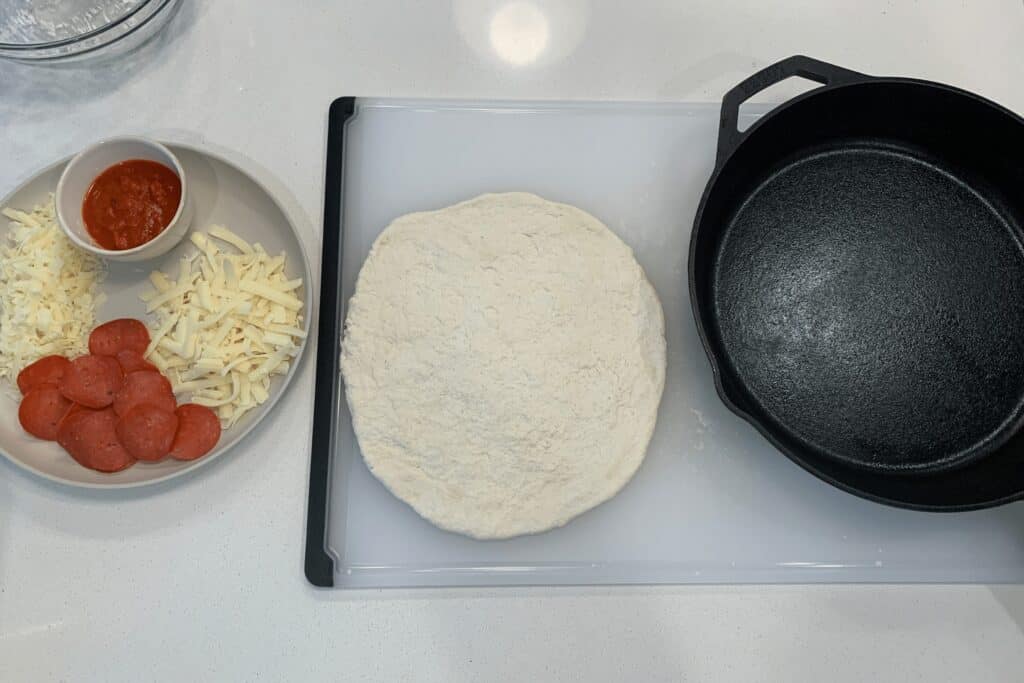 I use my knuckles/hands to stretch the dough, but you could use a rolling pin if you wanted. You could also get fancy and toss that baby around in the air!

Oh, and you could definitely cut this recipe in half and make a smaller personal pan pizza!

How to Make the Cast Iron Pizza

Now the fun begins! Other than handling a giant cast iron skillet, this part it super simple, too.

A few important notes about this section of the recipe:

1. Fully heat the oil before adding the 2 ingredient pizza dough. Otherwise, you may have some trouble getting a crispy crust. 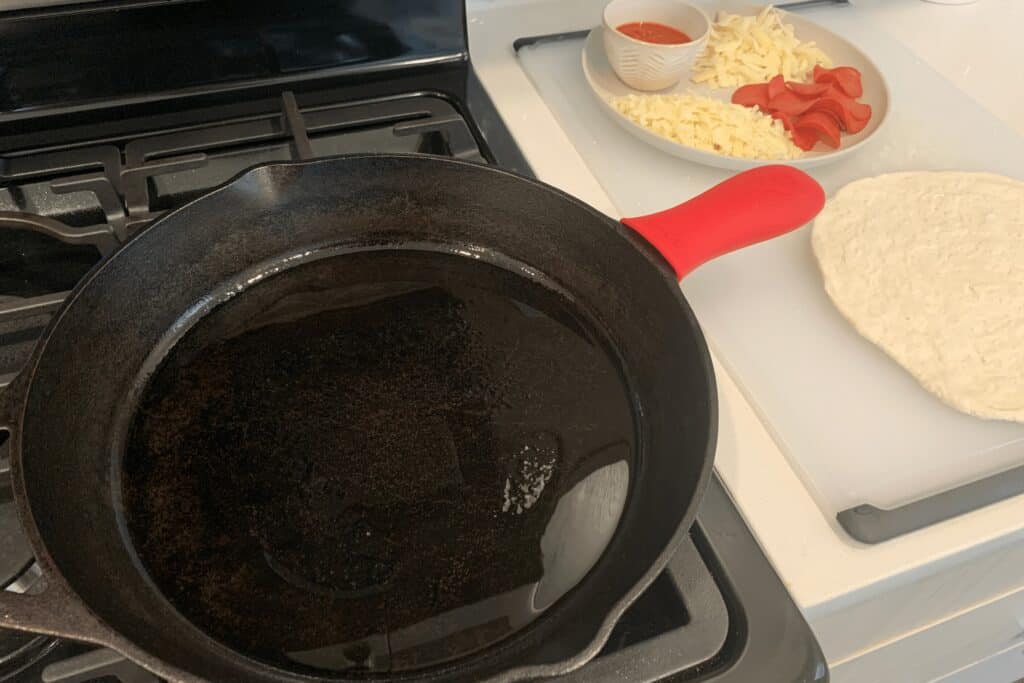 2. Have all your toppings prepped and ready to go before you put the dough in the skillet. You don’t want to be scrambling to prep ingredients while your crust is cooking.

3. If you feel confident, tilting the pan a few times during the first few minutes allows some oil to run up the edges of the dough, creating an extra crispy outer shell. Yum! 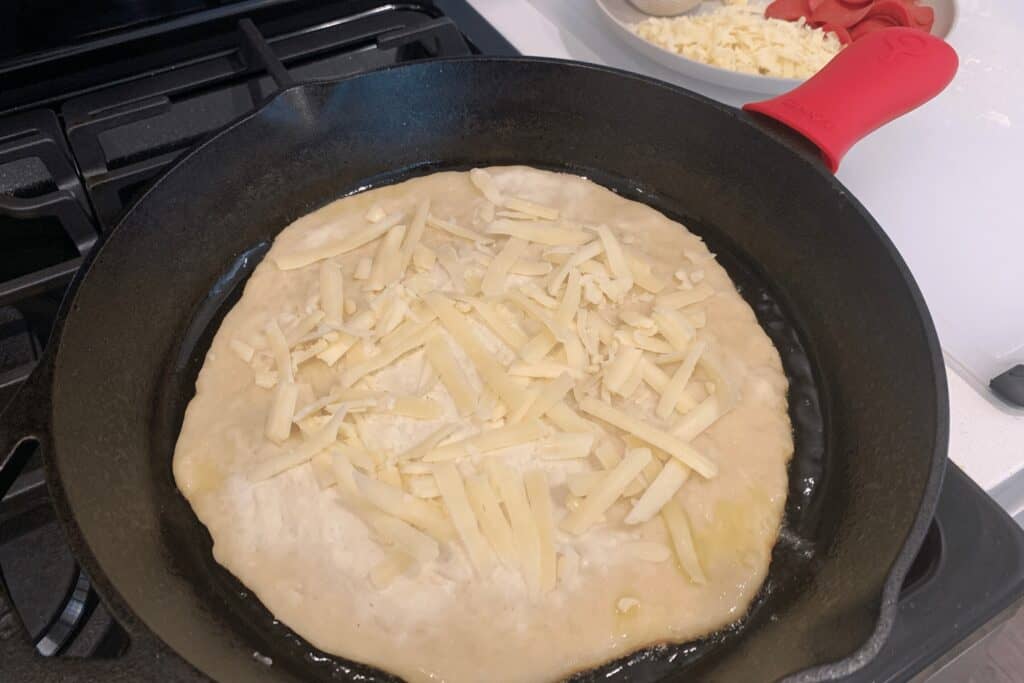 4. I like adding some of the shredded cheese early to melt and prevent a protective barrier between the dough and pizza sauce.

5. Cook over medium-low heat. The total time in the skillet should be around 8-10 minutes before finishing in the oven. And the crust should start to turn golden brown on the bottom before going in the oven.

6. Check on the bottom of the crust often. If you notice it’s getting a little too golden brown, reduce the heat or even remove from the heat. This is especially important if it’s your first time making a cast iron pizza. Every stovetop is different and you don’t want to burn the bottom in spots like I do in the video tutorial for this recipe! 😉

Can I skip putting my cast iron pizza in the oven?

The final few minutes in a hot oven fully melt the cheese, remove any excess moisture from the toppings, and let all the flavors get to know one another. I wouldn’t recommend skipping the oven but if you’re absolutely against it, you could try flipping the crust in the skillet after a few minutes before adding the toppings.

That way both sides cook and develop some crust. You could cover the skillet with a baking tray at the end to trap heat and finish melting the cheese.

Again, this isn’t ideal. Throw that bad boy in the oven to finish!

What if I don’t have a cast iron skillet?

I’ve had readers use other types of oven-safe skillets successfully. You could also use my air fryer pizza recipe and healthier cheesy garlic air fryer bread as a guide to air frying. Or you could throw your crust on a pizza stone or baking sheet and go oven baked like my low calorie pepperoni pizza.

One of the best tips I can give for recipe questions would be to join my free Facebook group and search the group for pizza. I’d bet there are hundreds of posts about this recipe at this point.

You’re welcome to use any topping combo you like for your own cast iron pizza. The recipe is a straightforward pepperoni pizza base, but you could add all kinds of things.

I like cooking any veggie pizza toppings beforehand for several reasons:

I have a pulled pork pizza recipe, pizza with buffalo chicken dip, an everything bagel breakfast pizza, and another biscuit pizza crust that you could definitely throw in a cast iron skillet. You get the point—the world is your anchovy. And again, my Facebook group is an awesome place to get topping ideas. 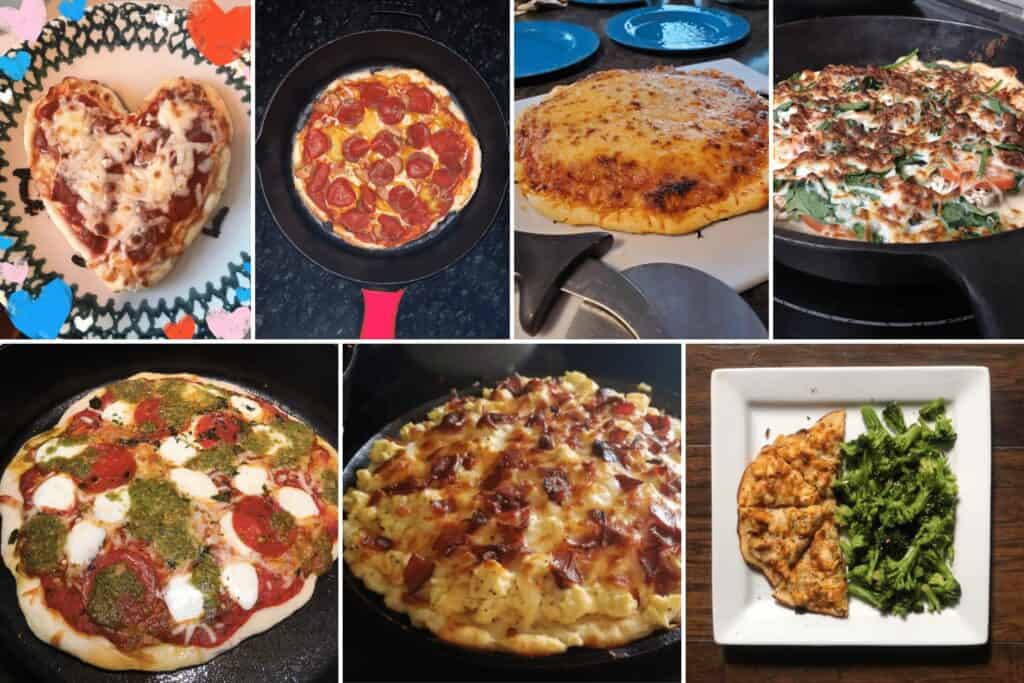 Some awesome cast iron pizzas from members of my Facebook group.

While this recipe might look long, I feel I’ve over explained in hopes of thwarting any issues up front. I promise it’s really easy to make!

That said, here are a few troubleshooting tips I could potentially see coming in handy:

And just as a reminder, let the oil get hot before adding the dough to the cast iron skillet! 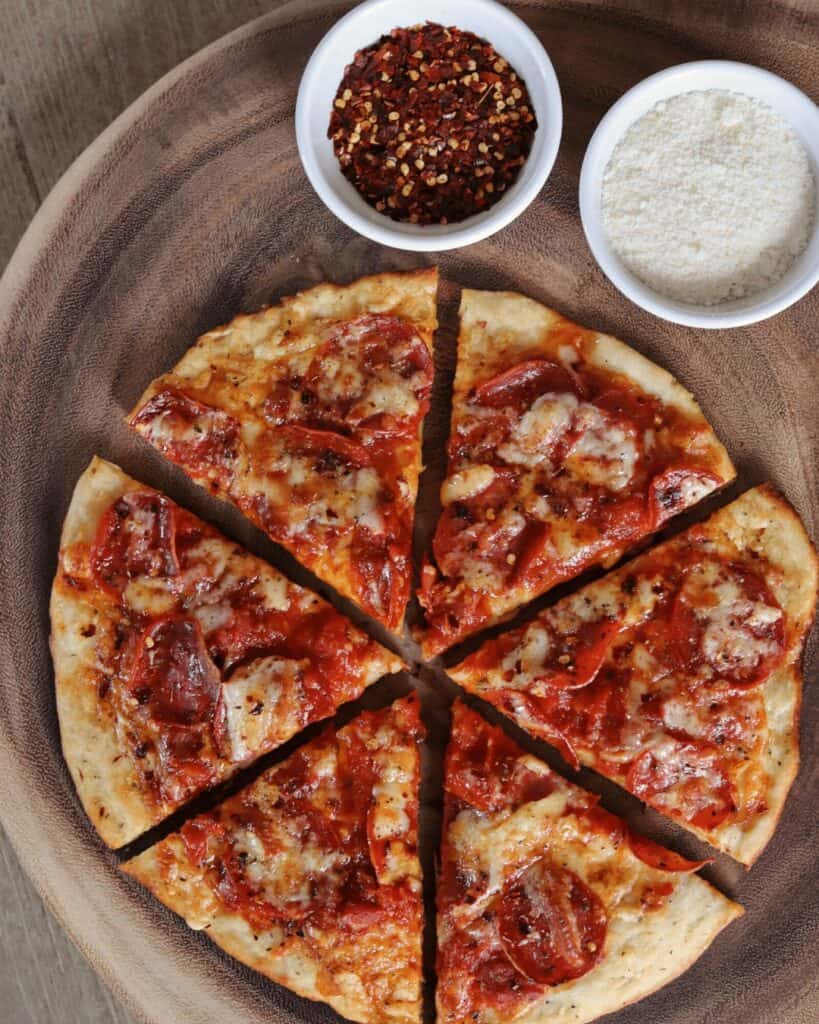 I think we’ve ironed out all the details. When you make this cast iron pizza, let me know if it’s one of the best homemade pizzas you’ve ever made. Take a photo and tag me on Instagram @mason_woodruff or join the conversation in the Facebook group!

For the Greek Yogurt Pizza Dough

For the Cast Iron Pizza

Has anyone ever tried this in an Ooni pizza oven? Or do you have another crust variation you would recommend for that? Thanks!

AMAZING Recipe!!!! Turned out absolutely perfectly. I love how the weights are listed so i could do the math and scale the recipe back a hair to fit my 10inch skillet. I ate the whole pizza. who the heck can have just one slice. lol Cheat day :)

Pizza SLAPS with a cold white claw! I also have put some of the dip recipes on top of the pizza and has turned out amazing.

I made these for my husband who is a pizza junkie and he LOVED it! When I told him it was made with Greek yogurt, he didn’t believe me. I’ve always loved this recipe because I can have that pizza craving with a lot better macros. And he enjoys it too! The cast iron makes it so crispy and delicious!

Two ingredient dough has been a game changer for me, so simple and tasty! I even went out and got a cast iron skillet just to get that crispy crust 🤤