Any chance you remember the joy that was waking up to Saturday morning cartoons and the sweet aroma of orange cinnamon rolls baking in the oven? If not, that’s okay. Because now you can experience that same joy with a lower calorie, higher protein version of this breakfast classic!

If you’re familiar with my recipes, you know I like to keep things simple. So I’ll tell you up front, these orange cinnamon rolls require a bit more work than my usual recipe. I’ve done my best, however, to make up for that with detailed instructions to guide you every step of the way. 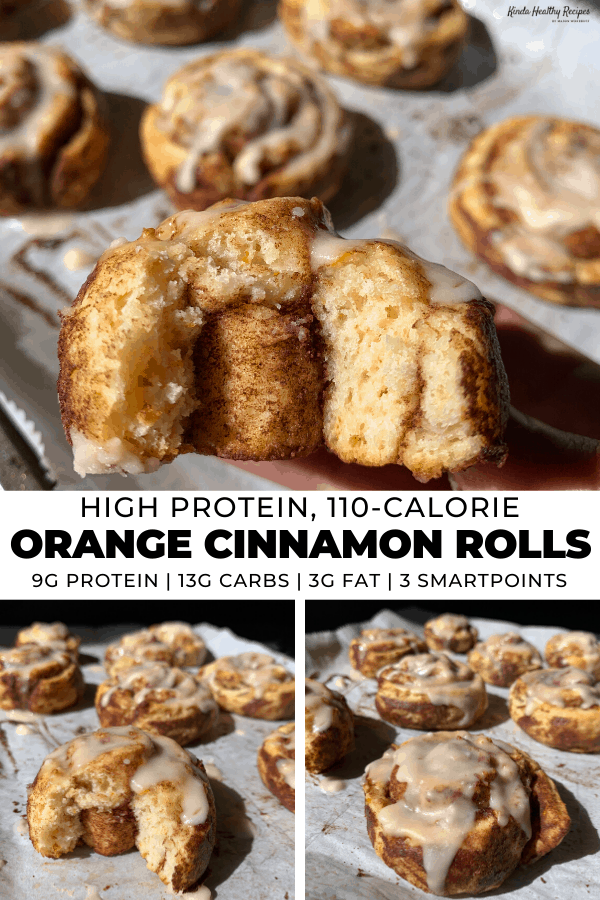 How to Make These Orange Cinnamon Rolls

As you’ll see in the photos below, I went with a food processor to mix the cinnamon roll dough, but you can use anything from a stand mixer to a bowl and a fork! The dough has a similar composition to my Greek yogurt biscuits, and I mix that dough with a fork.

Regardless of what you use, try to avoid over mixing the dough as that will create tough cinnamon rolls. And be sure to give the dry ingredients a mix before adding the yogurt, butter, and zest to get even baking powder and cinnamon distribution! 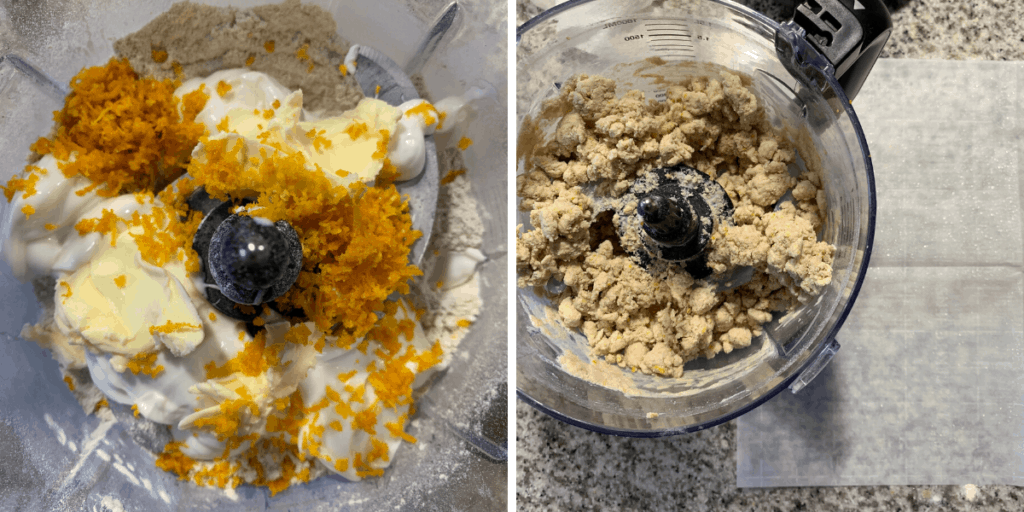 You can see in the photo below that having some dry ingredients is fine. You can use your hands to bring everything together before rolling out the dough. 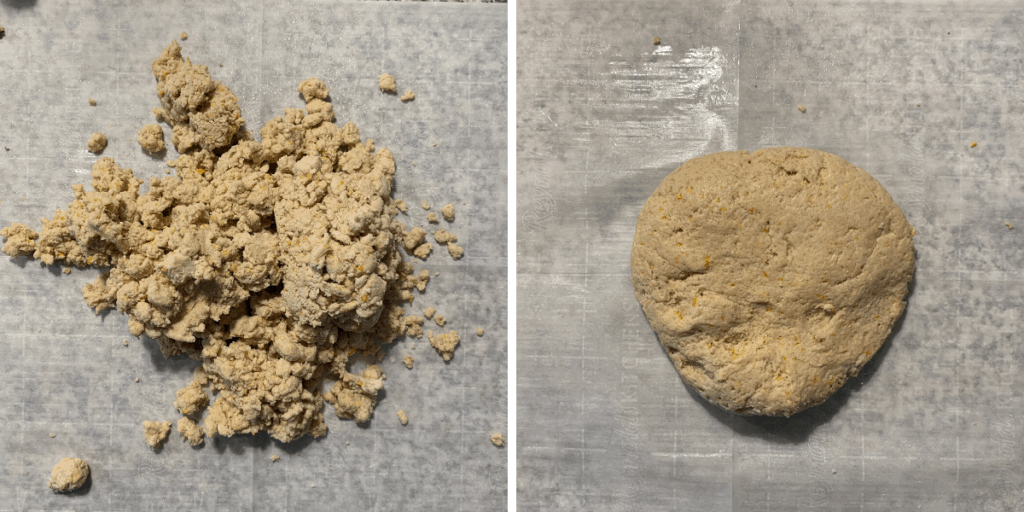 I like to use a mini rolling pin so I can easily hold one end of the parchment paper. You can find the rolling pin, food processor, and other tools I use on my Amazon store. 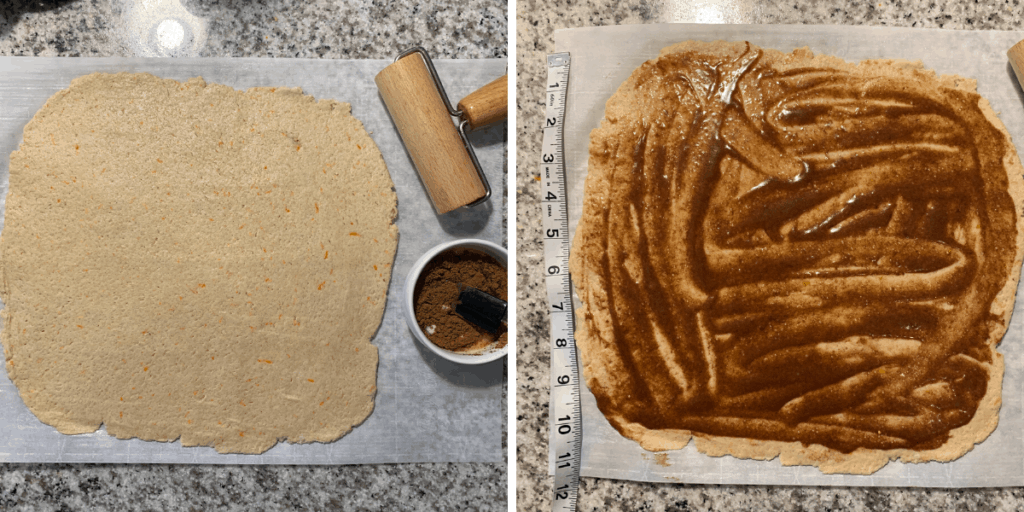 As you can see in the photo above, the finished dough when rolled out should roughly be an 11″ square. You don’t have to measure your dough but if you fail to roll it out enough, you might have thick or dense cinnamon rolls.

Rolling the dough is really the only challenging part of the recipe. Then it’s as simple as brushing on some more butter and cinnamon, rolling it up, slicing, and baking.

The glaze is a 2-ingredient concoction of powdered erythritol and orange juice from the oranges you zested. Easy peasy orange squeazy!

Since this recipe deals with handling a dough, substitutions can be tricky. I’ve tried to substitute almond flour for all purpose in my cast iron pizza recipe, for example, but I can’t ever get the dough to work. The closer you can stick to the script, the better!

Aside from flour, the only other big variable will be the protein powder. I use PEScience Select in my recipes, which is a blend of whey and casein protein. The addition of casein makes it a bit thicker in consistency than whey-only protein powders.

If you’re using a whey-only powder, you may need to add an extra scoop, reduce the Greek yogurt, or both. Similar to flour, modifying protein powder in recipes with dough can be tricky. If you want to check out PEScience products, you can save 15% with my affiliate discount code ‘mason‘ on pescience.com. 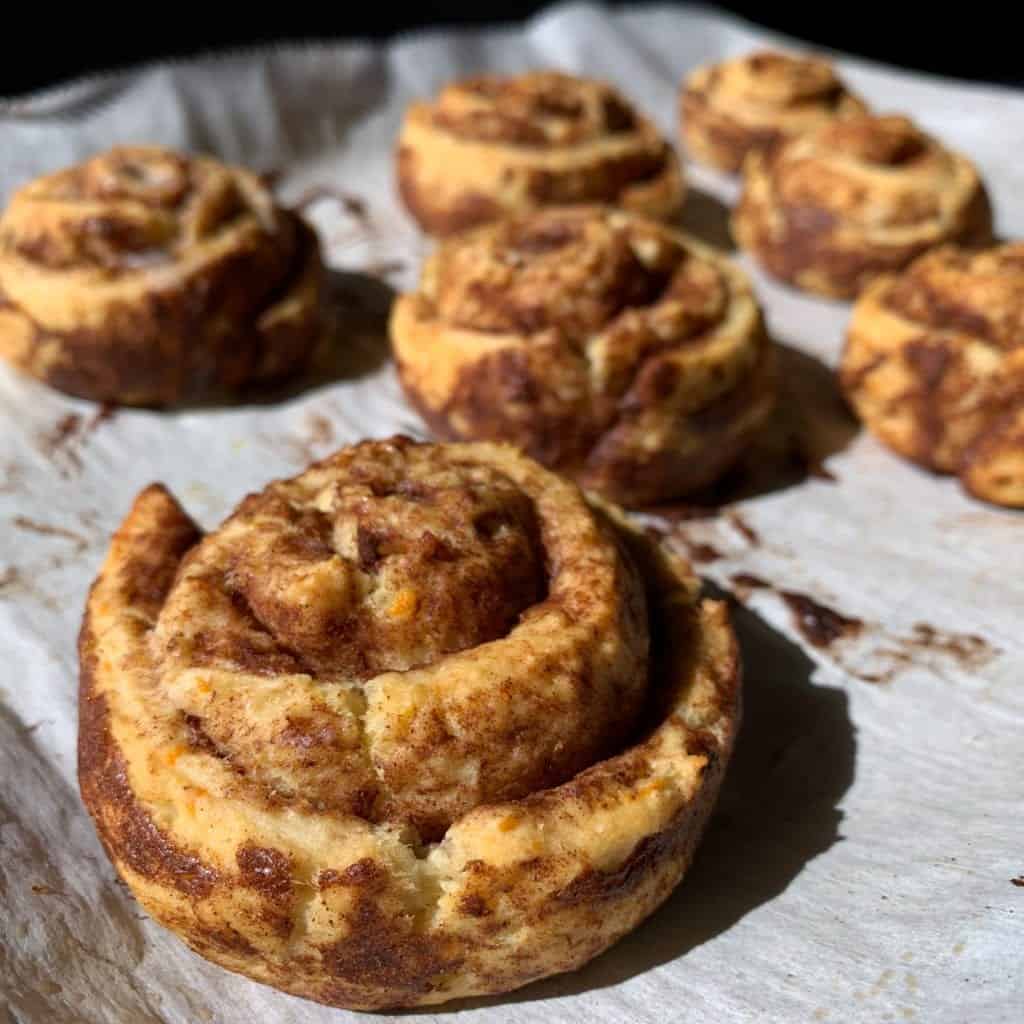 And that’s all the notes I have. It’s time to get your roll on!

If you make these orange cinnamon rolls, I want to see them! Take a photo of your creation and tag me on Instagram @mason_woodruff. Or you can join my free Facebook group and share it with the Proton Party.

For the Orange Glaze

*You can save 15% off PEScience products with the discount code mason on pescience.com (affiliate code). 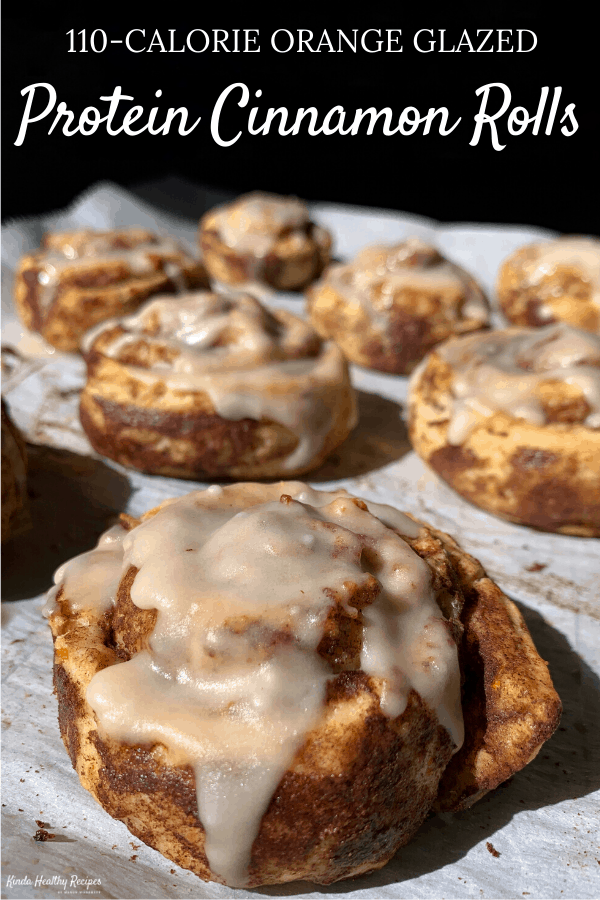 This recipe is really good. Unfortunately I did not have anything orange so I just left it out. Little kid approved on this one and you wouldn't know they are sugar free and high protein.

followed the recipe exactly, but omitted the orange because I didn't have any on hand, so it was just regular cinnamon rolls and they were absolutely amazing! they're a little more dense than normal cinnamon rolls, but the flavor is definitely there! I ate half the batch myself!! Next time I'm going to make cream cheese icing instead of the glaze in the recipe because I like a thicker more moist topping and who doesn't love cream cheese!?

These are the bomb! Flavor is on point, just be sure to not overwork the dough or it will get too sticky to work with. I skip the glaze and they are still awesome!

These are the bomb! Flavor is on point, just be sure to not overwork the dough or it will get too sticky to work with. I skip the glaze and they are still amazing.

I've made these a few times and I LOVE the orange glaze. These did not come out too protein-y tasting at all. Definitely spray or rub your rolling pin and your with oil to avoid sticking. I also used real butter as I always do with my baking. Reheated every morning throughout the week to pair with breakfast. Who doesn't love cinnamon rolls on the weekdays?!