Cinnamon Roll in a Mug Ingredients

This recipe has a short ingredient list, with the cinnamon roll dough itself having just two ingredients—Carbquick (or Bisquick) and Greek yogurt. If you’re unfamiliar with Carbquick, it’s a lower carb biscuit and pancake mix similar to Bisquick. You may be able to find Carbquick in stores, but I order mine on Amazon.

Beyond the Carbquick, you’ll need a bit of light butter, cinnamon, and a calorie free sweetener. I use Land O’ Lakes light butter with canola oil in most of my recipes, but other products like I can’t believe it’s not butter work as well. 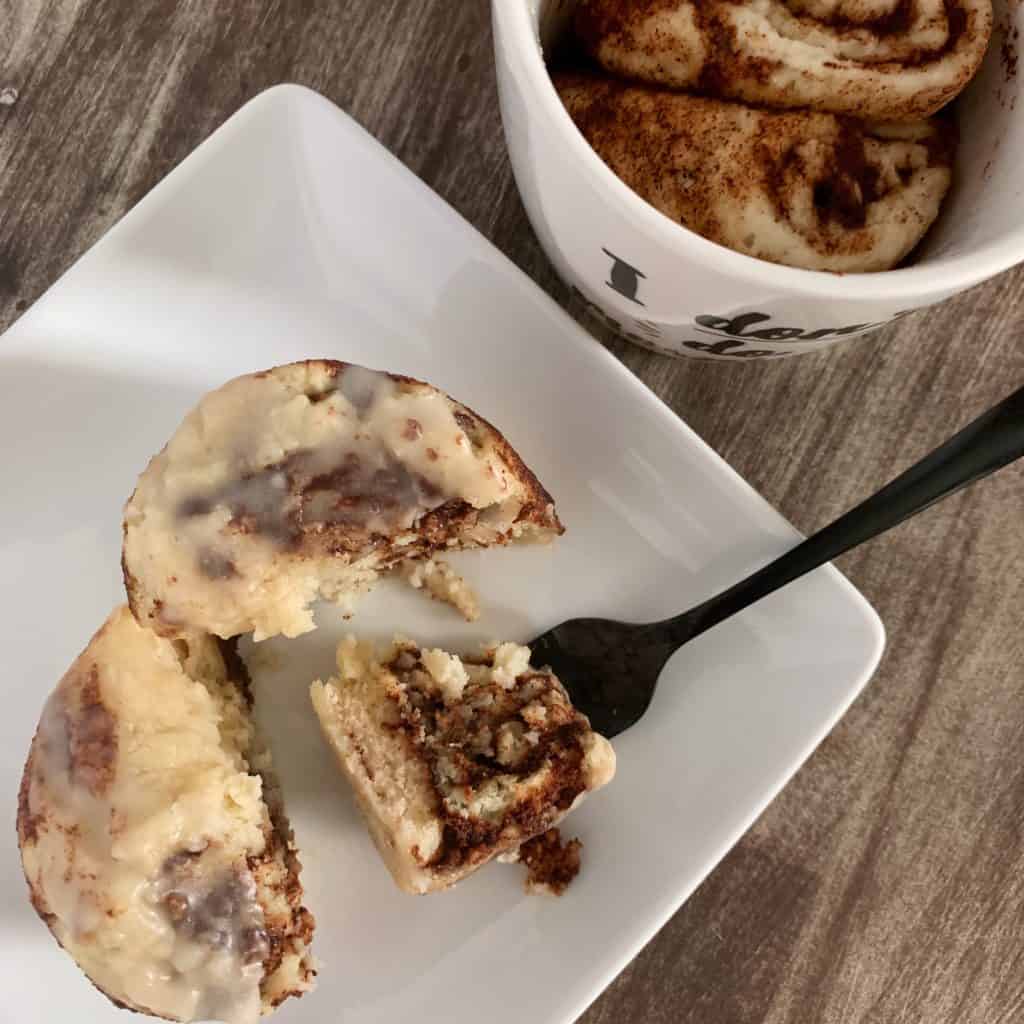 I’ve included notes in the recipe card below for using alternatives like Bisquick, Kodiak Cakes, or Birch Benders like I use in my 3-ingredient easy protein powder pancakes and homemade McGriddles recipes.

The recipe calls for Swerve Confectioners which is a calorie free powdered sugar substitute and one of my all time favorite products. Swerve products use erythritol and natural oligosaccharides and taste amazing. I always like to say, I’m not affiliated with the company, I just love the products!

You could also try blending a bit of granular sweetener with corn starch or another thickener like arrowroot powder, xanthan gum, or even protein powder to create a faux powdered sugar.

How to Make This Cinnamon Roll in a Mug

While this cinnamon roll in a mug recipe is a few more steps than my typical mug cake, it’s easier than you might think. All you’ll need to do is mix the Carbquick or Bisquick with Greek yogurt to form a dough, roll or press the dough flat, and spread a cinnamon sugar mixture on top.

Then it’s as easy as rolling, cutting, and microwaving. As you can see, the dough forms two cinnamon rolls so you can easily share or have a giant cinnamon roll for yourself.

One final tip I have on the process of making your cinnamon roll in a mug would be rolling the finished roll in a little extra cinnamon and sugar for the classic cinnamon roll exterior like you see below. 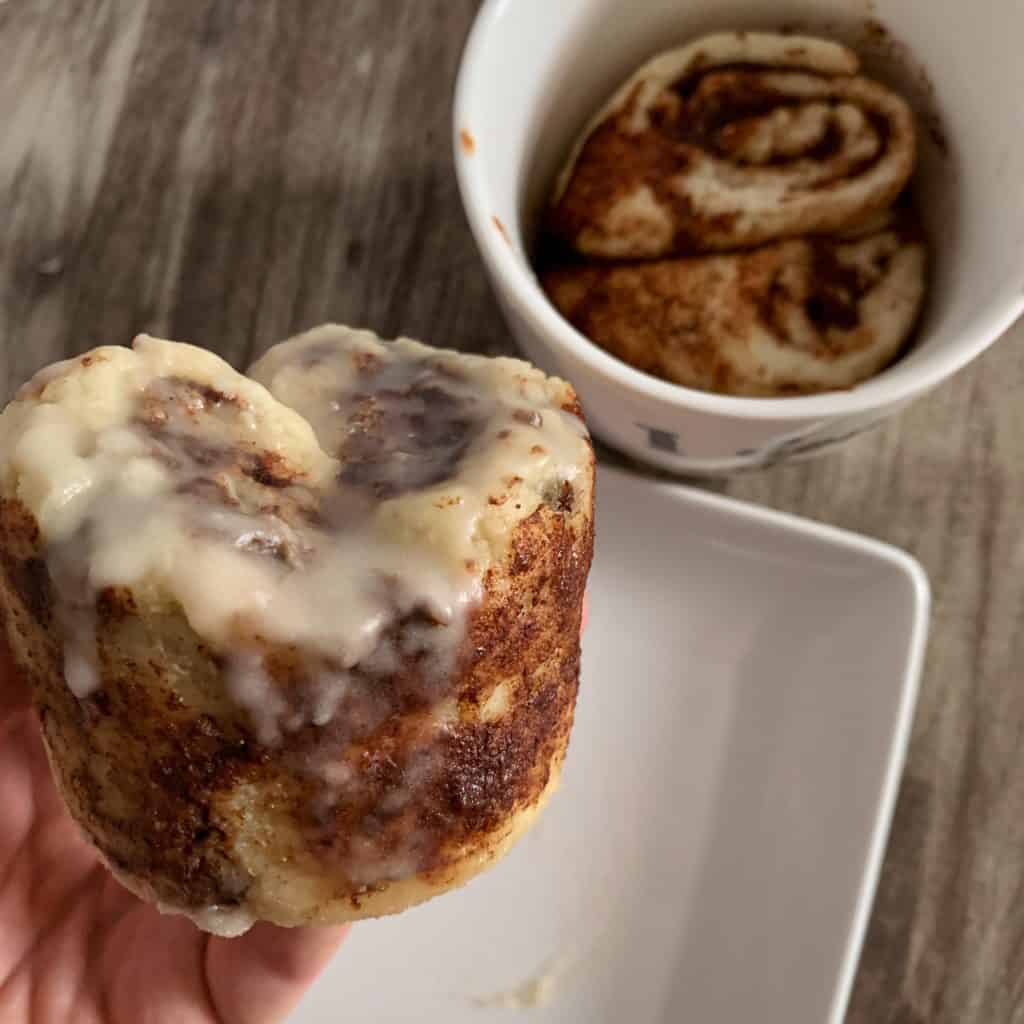 You can also add an extra teaspoon of butter to the dish you mixed the butter, cinnamon, and sweetener in and drizzle the rest over the outside after adding to the mug.

Okay, you should be good to go. You’ll find the full recipe below. If you make a cinnamon roll in a mug, snap a pic and let me know what you think. Feel free to tag me on Instagram or join my free Facebook group and share it with the crew.

For the Cinnamon Roll

For the Sugar Free Glaze

Using Bisquick instead of Carbquick? Use 1/2 cup (60g) Bisquick and 1/4 C (56g) Greek yogurt. The dough will be a bit thinner so you may want to roll it on parchment paper so it's easier to roll.

This recipe is how I found you! So great for my weekend AM sweet tooth. 10/10 would recommend! Depending on what fruit I have in the fridge sometimes I’ll cut up an apple or stick some blueberries in before I roll the dough to give it some extra pizazz.

I was scrolling through Pinterest looking for a quick and easy cinnamon mug cake, but most comments said a lot of the other recipes were horrible!

However, when I saw your comments...I decided to try your recipe. I went the unhealthy route lol...I didn’t see your note about the different measurements for bisquick or parchment!

I literally just kept adding more mix until I got a slightly sticky dough. I just used the parchment to the best of my ability to roll it like sushi lol.

It was amazing! I made a cherry coke glaze that was just powdered sugar, cinnamon, water and a splash of the cherry coke...it was to die for!!!! My roll came out like Cinnabon size and I had to microwave for about 3.5 mins.

Glad this one lived up to the comment hype! I'll have to try your cherry coke glaze. That sounds amazing.

I bought Carbquik just to try this recipe out and it was sooo worth it! I am terrible at making dough to make cinnamon rolls but this recipe was fool-proof. I was able to create the dough easily and produce a yummy treat for one! Will definitely be making this my new dessert go-to.

This was tasty but I would lessen the cinnamon. It was a little powerful. I didn’t make it as a roll because the dough was very sticky. I just threw it in a tiny baking dish and in the microwave for 1 Minute. It cured my cinnamon roll craving! Thank you

This roll is everything a flexible dieter could ask for! Easy and simple to make, macro-friendly, and still able to satisfy your sweet tooth! I topped mine with sugar free maple syrup (which everyone should use IMHO, the calories AND carbs are wasted on full-sugar syrups!). i also got a little fancy with some PEScience protein icing (powder and a little water). I am so grateful Mason comes up with healthy recipes that are free for us to use and love! This one is a hit.