I have plenty of guilty pleasures in the world of food, but one of my guiltiest has to be McDonald’s 2 for $3 deals on bacon, egg, and cheese biscuits. My commute in college took my by not one, not two, but three McDonald’s every morning. The struggle was real. This intense BEC passion is why I’m pumped about these low carb biscuit donuts.

They have all the signature BEC flavors in donut form (a large donut, might I add) with only 130 calories and 8.5 grams of carbs per donut. As always, I’ve included plenty of ways to tweak the recipe to adjust calorie and macronutrient content. A simple bacon swap, for instance, could bring each donut down to 115 calories. And a tweak to the eggs could result in low carb biscuit donuts with a ridonkulous 92 calories each.

That is correct, I said 92-calorie biscuit donuts.

The only ingredient worth briefly mentioning might be the biscuit mix. Like my microwavable low carb bacon, egg, and cheese biscuit recipe, we’ll be using something called Carbquick Biscuit Mix. If you’re wondering whether or not you could use regular Bisquick mix, you could, but the Carbquick really stands out nutritionally. We’re talkin’ 14 grams of fiber and 6 grams of protein per serving.

Once you have the biscuit situation nailed down, you’ll only need bacon, eggs, and cheese.

If you’d like a look inside my kitchen, you can get a behind the scenes look at this recipe’s development process on my Instagram and IGTV. 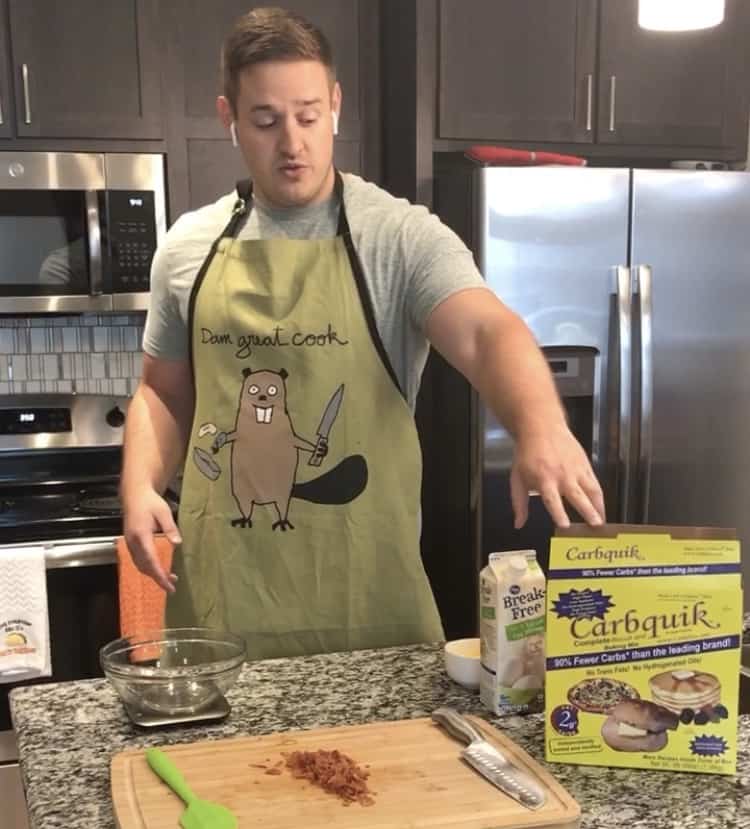 To easily modify the macros of your biscuit donuts, use a different bacon option. The base macros use precooked traditional pork bacon. Here’s a look at the numbers with two additional types of bacon:

You could also use raw center cut bacon for comparable macros to the traditional.

As you can see, the bacon makes a difference but not a huge difference on a per donut basis. So, to put a larger dent in the macros, you could swap the eggs for egg whites. If you swapped the three whole eggs for three more servings of egg whites, your numbers would drop to 92 calories, 9.5g of protein, 8.7g of carbs, and 4.7g of fat per donut.

Note: Removing that much fat from the donuts could result in tougher donuts. I’d recommend starting with the base recipe and maybe replacing one egg at a time to see if you like the yolk-less biscuit donuts. 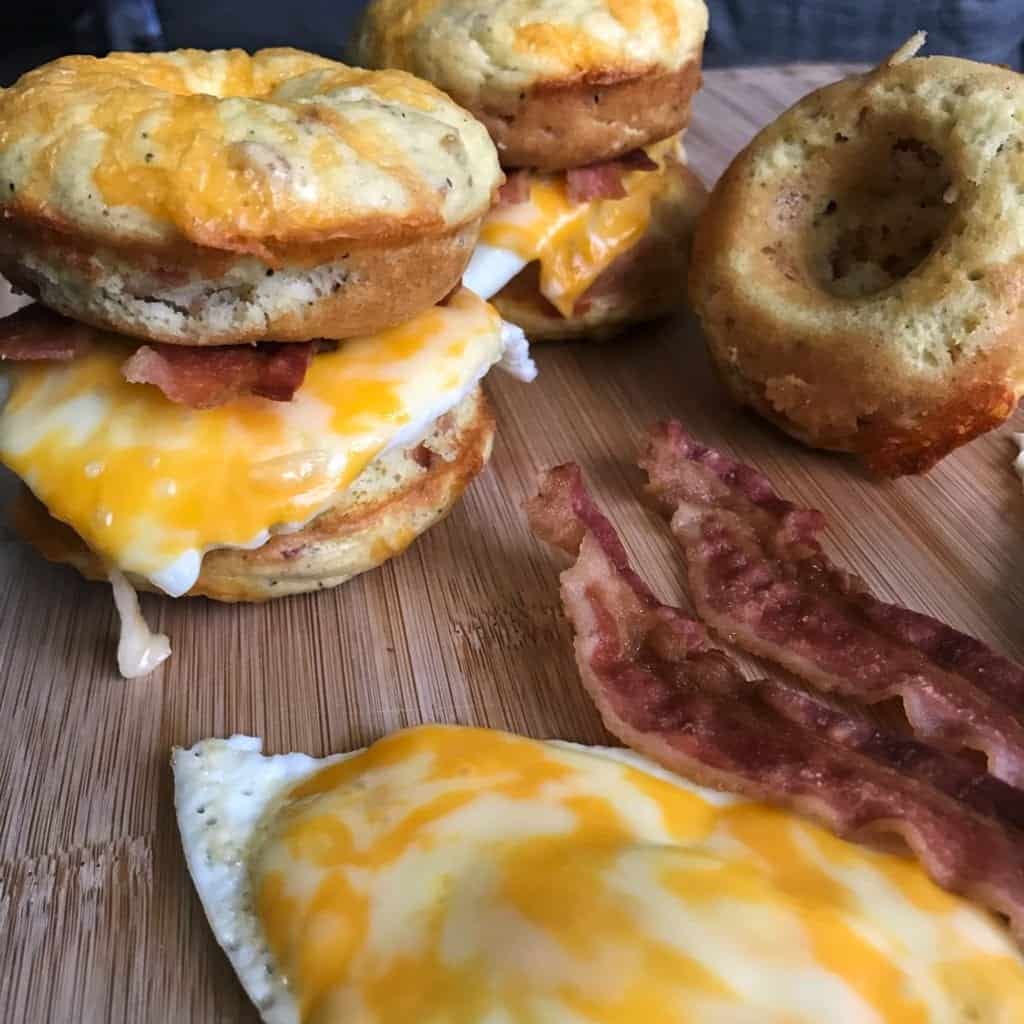 If you’re going to be eating these low carb biscuit donuts right away, I highly recommend frying up a few eggs to add on top of one. S’tasty! 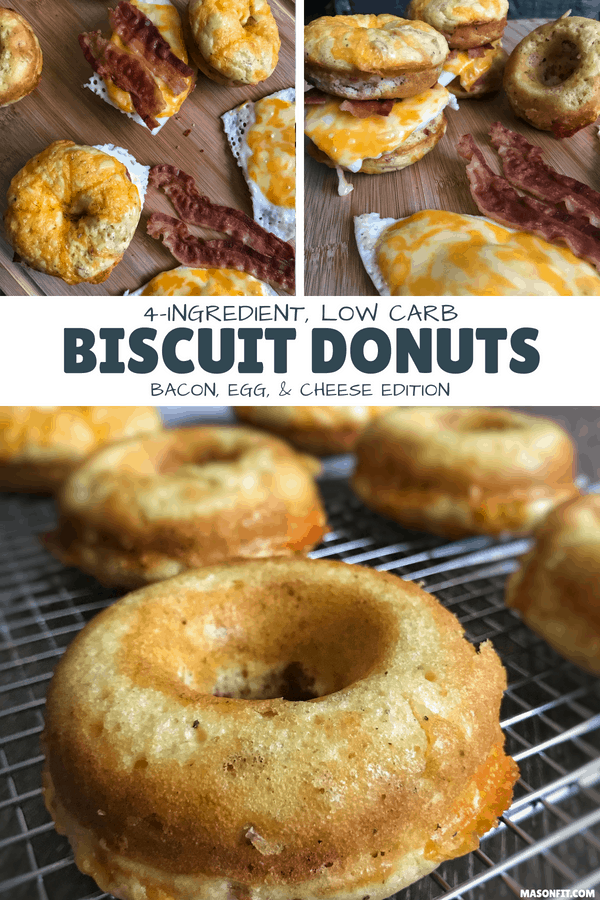 This was my first time using Carbquick so I nothing to compare it to but for anyone else in the same boat I thought I would leave my thoughts. First off, mine turned out just like the pictures above so I was very excited to try one for breakfast this morning because they look absolutely delicious. I decided to cut one in half, toasted it, and then added a cooked egg white to the middle with a half slice of FF American cheese to make it a breakfast sandwich. I do this with regular English muffins and really enjoy them so I wanted to see what it would be like with a low-carb option like this recipe. My experience wasn't great. I found the texture to be very dry and needing some kind of moisture (runny egg, butter, or jam) to get through the entire sandwich (the FF cheese just wasn't enough) but I toughed it out and finished it dry just to keep my macros where I needed them. I will try to find other ways to eat the rest of the batch such as toasted with light butter or SF jam but for me I don't think I'll be making it again and I really hope I can find something to do with the rest of this Carbquick mix.

Have you tried making a larger batch of the donuts and freezing ? Wondering how they hold up ? Thanks, Maria

I haven't tried freezing them but if you sliced in half before freezing and then toasted them, I bet that'd work better than reheating whole. Hope that helps!

Such an quick easy way to satisfy my breakfast food cravings without overindulging. Thanks!

These were pretty good. I used bacon bits as that is what I had on hand. Mine came out on the dry side. I probably cooked them too long. Most mornings I sliced them and put them in toaster and added a fried egg in between.

These biscuit donuts are a great grab and go breakfast option. I change it up with ham or sausage and have added some chopped veggies. Also, great with a little jam on top.