Before we get to the recipe, you should know that this is one of the best low carb bacon, egg, and cheese biscuit recipes in all the land. And it has nothing to do with the fact that’s it’s microwavable and ready in less than 5 minutes or its high protein content. Nope. It’s because unlike just about every other BEC biscuit provider out there, I’ve opted to use the Oxford comma in its title. 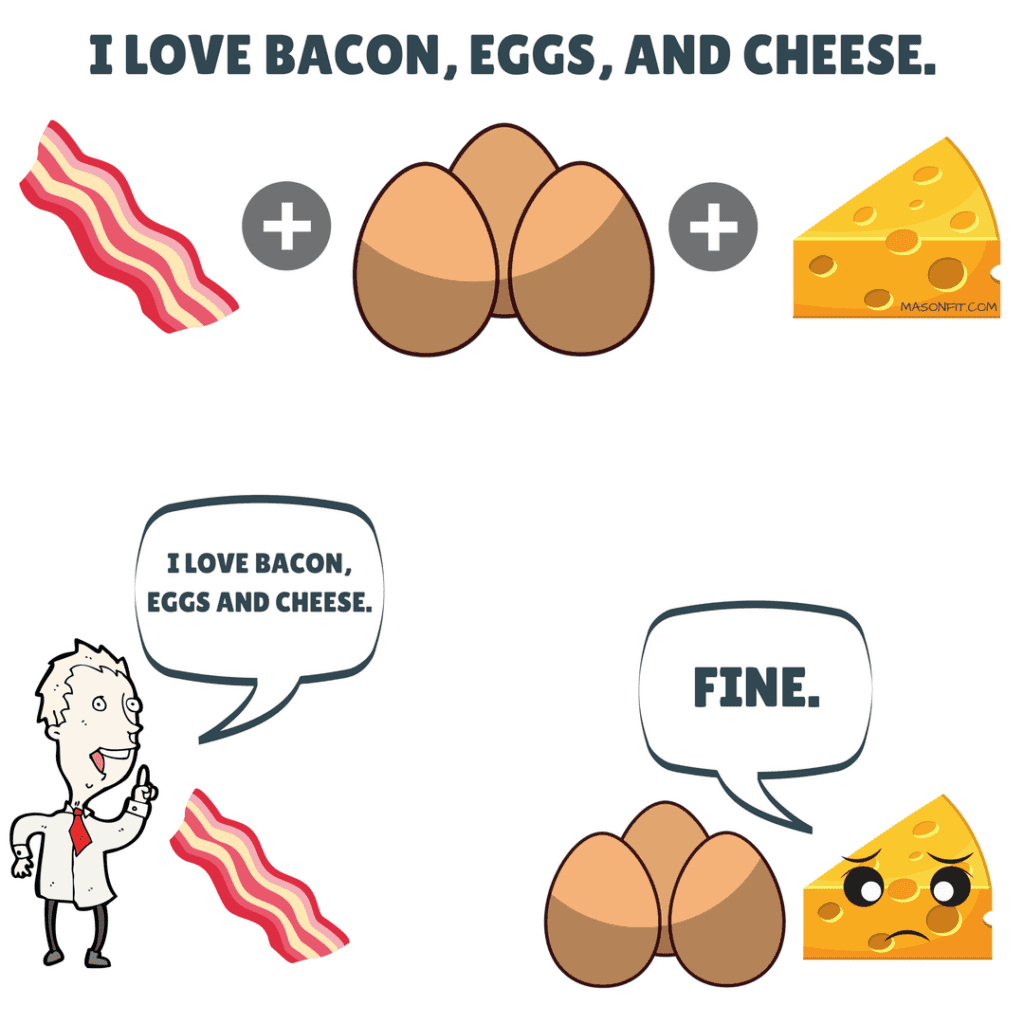 Okay, I’m just having fun. Titles aside, this low carb bacon, egg, and cheese biscuit is seriously tasty and crazy simple. I think you’ll be surprised at how delicious microwavable eggs and biscuits can be.

And in terms of nutrition facts and macros, you’ll be able to eat two biscuits for 225 calories, roughly half the calories of a normal bacon, egg, and cheese biscuit. 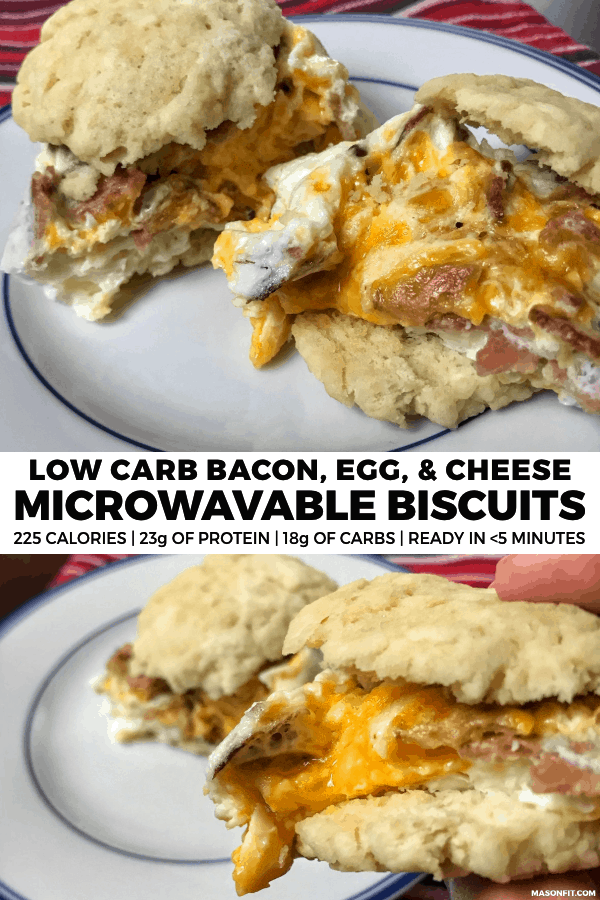 Something I value in life and in my recipes is simplicity. If there’s something that makes cooking easier and reduces time spent in the kitchen without compromising nutritional value, I’m all for it. In this case, we’ll be using something called Carbquick Biscuit Mix. If you’re wondering whether or not you could use regular Bisquick mix, the answer is yup, but the Carbquick really stands out nutritionally.

With 14 grams of fiber and 6 grams of protein per serving, you can see what I’m talking about. 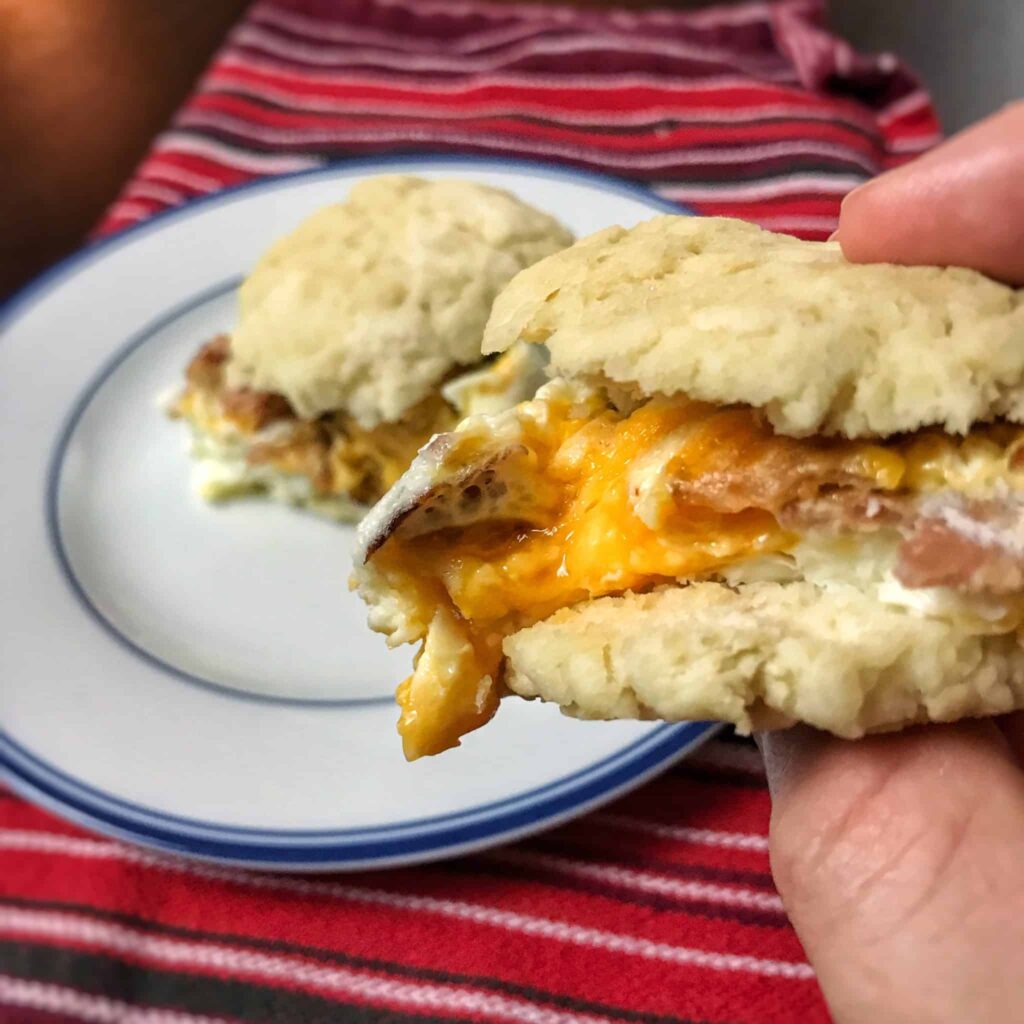 Outside of the biscuit, the remaining ingredient list is a short one. I’ve included a few macronutrient variations based on the type of bacon and cheese you use, but there’s not a ton of variation if you’re making a single serving of the recipe. If you plan on doubling or tripling the recipe, the small differences may make more of a difference. 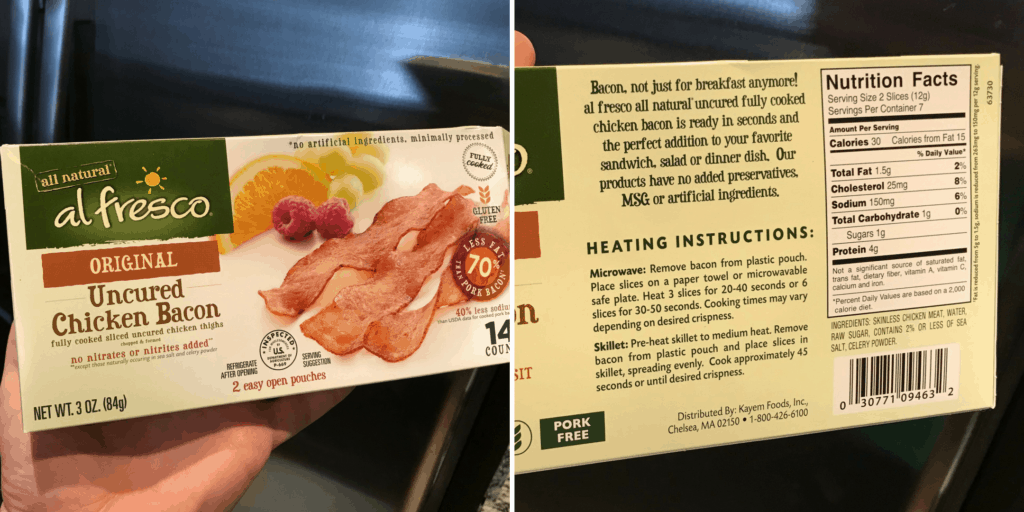 If you’re a sausage egg and cheese biscuit lover, you could prep some of my chicken breakfast sausage patties in advance. They reheat really well and have 10 grams of protein with just 60 calories each!

How to Cook Bacon in the Microwave

If you’d like to use pork bacon and cook bacon in a microwave, here are two ways to make it happen: 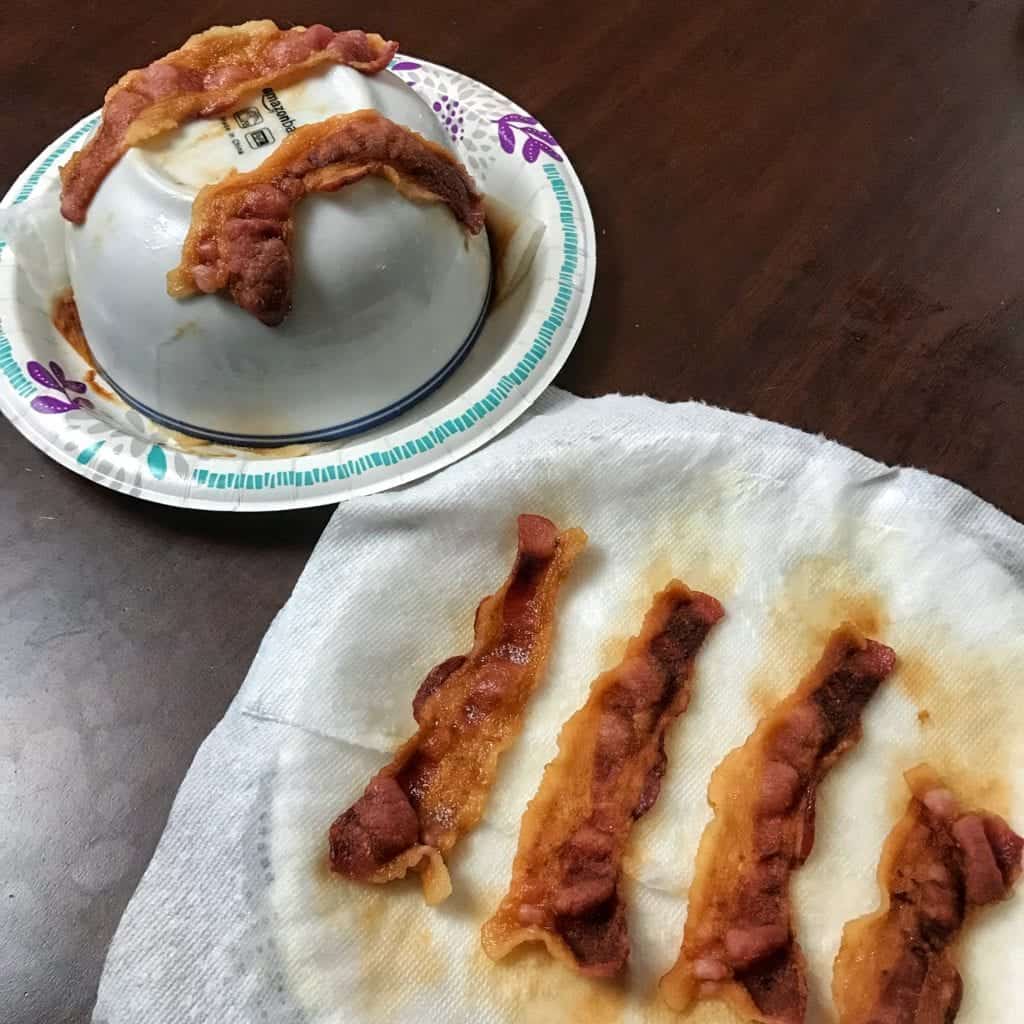 I’ve found both techniques to work about the same, with the strips over the bowl being slightly less greasy. If you’re cooking more slices at once, however, the plate method is probably your best bet.

All right, that’s about it for the ingredients. You’ll find the full recipe below. 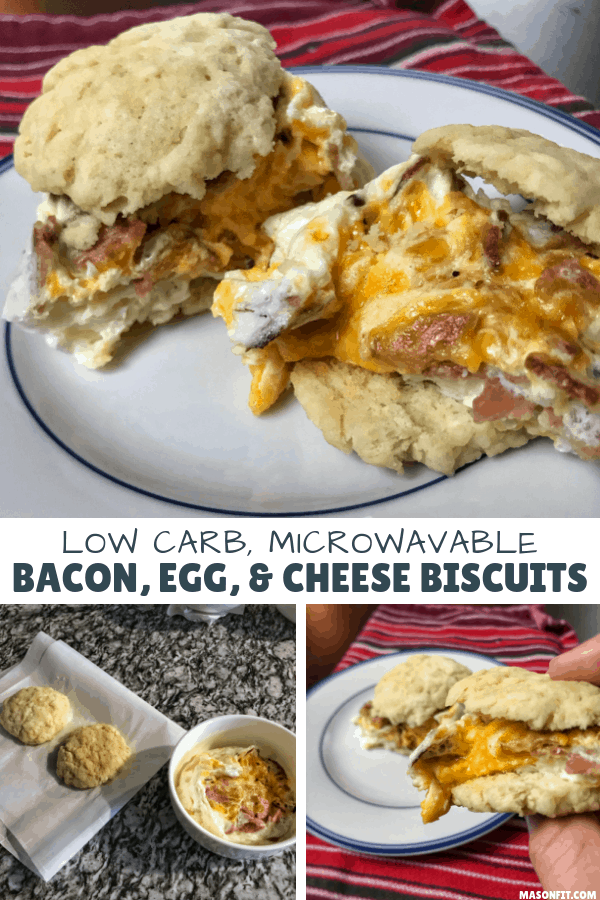 So, I tried this today. Yummy, but HOW in the WORLD do you make 2 biscuits out of that? I could only form one and it was no where near big enough to hold the amount of egg/cheese/meat in this recipe. I ended up crumbling the biscuit into the egg mixture and adding some everything bagel seasoning and ate it like a breakfast bowl.

I don't remember having any issues making two biscuits, but it's been 84 years since I made this one. Maybe there was a measurement vs weight discrepancy? I would always go by grams if you have a food scale available.

I had low expectations because I thought mixing some Carbquik and water couldn't possibly make a real biscuit but I was willing to give it a try because of how quick it was to put together and I was so surprised! Don't get me wrong, it's not like a regular biscuit because it's a little tougher but it sure hits the spot for a hearty quick breakfast with some flaky breadiness to it. If you use precooked bacon be warned that between that and the Carbquik it is very high in sodium so make sure you have some water near by!

Amazing. I was skeptical on the biscuit because it just seemed too easy and too good to be true. I WAS WRONG! Oh my goodness. They were really good! A little more tough, and I seriously mean just a little, but with the macros, you can’t beat it. I will forever make biscuits like these ones.

SO. EASY. & SO. TASTY. I couldn't believe how good this was, especially for how little time it took to put together. I didn't have any cheddar cheese on hand, & don't have as wide of a variety of options especially those that are easily accessible with living here in Aguadilla, Puerto Rico; however, it was still so good! I'm sure the addition of cheese would make it even better, because well, cheese. I've also tried adding some nutritional yeast to my eggs, & that did help add some flavor & a bit of "cheesiness," which was nice. I've honestly made this multiple times in a day & every day since discovering it a few days ago. It's that easy & good. I've also heated up my non-stick pan while my bacon cooks in the microwave & made my egg + cooked bacon mix in there without adding much time at all. I prefer it since the texture of the eggs is better & I really don't find that it becomes too cumbersome or add too much time. By the time you get your dough all mixed & done in the microwave, your eggs are just about done anyways. Excited to get all my other ingredients in from Amazon to try more recipes I've already got saved to try next! Thanks, Mason!

These are my FAVORITE! I'm not a big fan of the taste of eggs, so I loaded this down with Everything but the Bagel seasoning and it was SO GOOD. The texture of eggs also weirds me out, but this biscuit completely took that away! I use this recipe at least 3 times a week...obsessed