I’m not saying you’ll never make sweet potato hash browns another way after you try this recipe. All I’m saying is that you’ll question why you’ve been cramping your forearms with that bulky box grater.

This opens up a whole new world of easily prepping sweet potato hash browns in bulk to freeze for later or feeding your small army in a hurry.

And while you’re welcome to season your hash browns however you’d like, the sweet and spicy blend I’ve included in the recipe is a must try at some point! 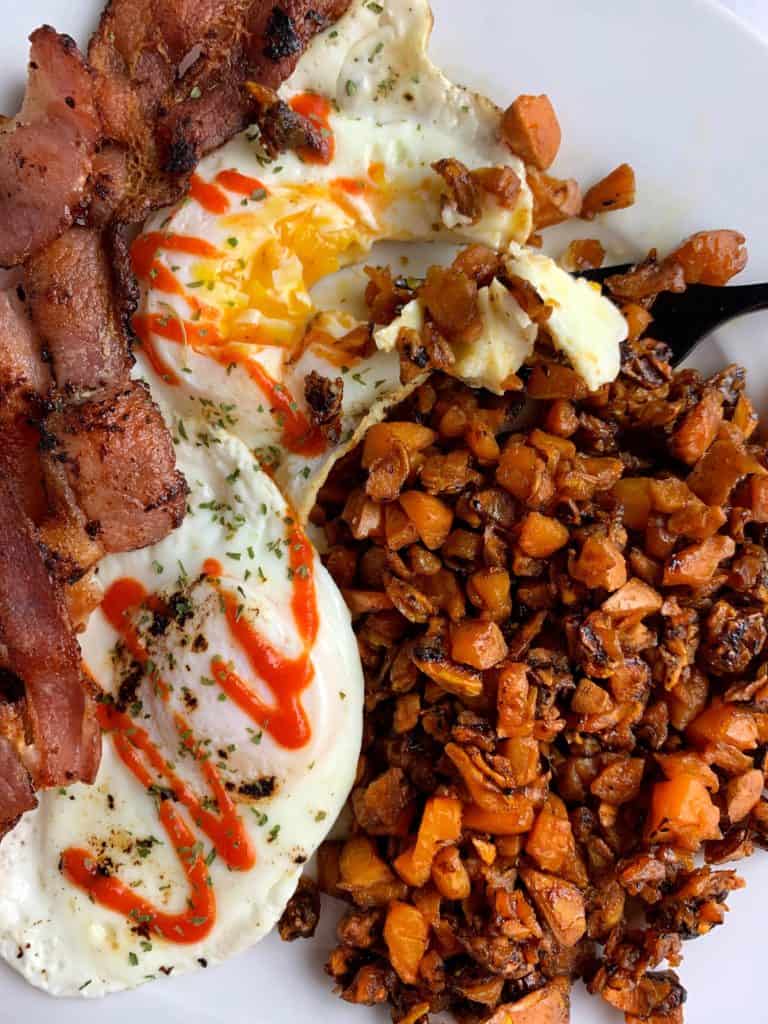 How to Make Sweet Potato Hash Browns in A Food Processor

Sweet potatoes may be a complex carb, but this method for hash browns is as simple as it gets. All you’ll need to do is wash and chop the sweet potatoes into manageable pieces. Then add those pieces to a food processor and pulse a few times.

If you’re making a larger batch, you’ll want to split up this step for each potato unless you have a massive food processor.

You can get an idea of what your potatoes should look like after pulsing in the image below.

I like to leave the skin on my hash browns, but you’re welcome to peel the potatoes first. They give an added texture to the hash browns and have some nutritional value as well.

As for seasoning your sweet potato hash browns, you can use the blend from the recipe below or get creative. The only tip I’d give here is to stick to dry spices. Adding liquids will make it difficult to make crispy hash browns.

Whatever you decide to season your hash browns with, simply add it on top of the hash browns when they go in the pan, cover, and cook for five minutes. After that, uncover, cook a bit longer to make them extra crispy, and dig in!

Can I use white potatoes?

White potatoes will work fine, but I find they begin to oxidize much faster than sweet potatoes. If you’ve grated a potato and wondered why the color turned from white to brown, that’s the oxidation.

You may also want to check out my recipe on how to make breakfast potatoes in an air fryer, which calls for baby gold or Dutch yellow potatoes.

Can I freeze these sweet potato hash browns?

Totally! Add the processed sweet potato to a resealable bag and freeze. Just be sure to squeeze all the air out. 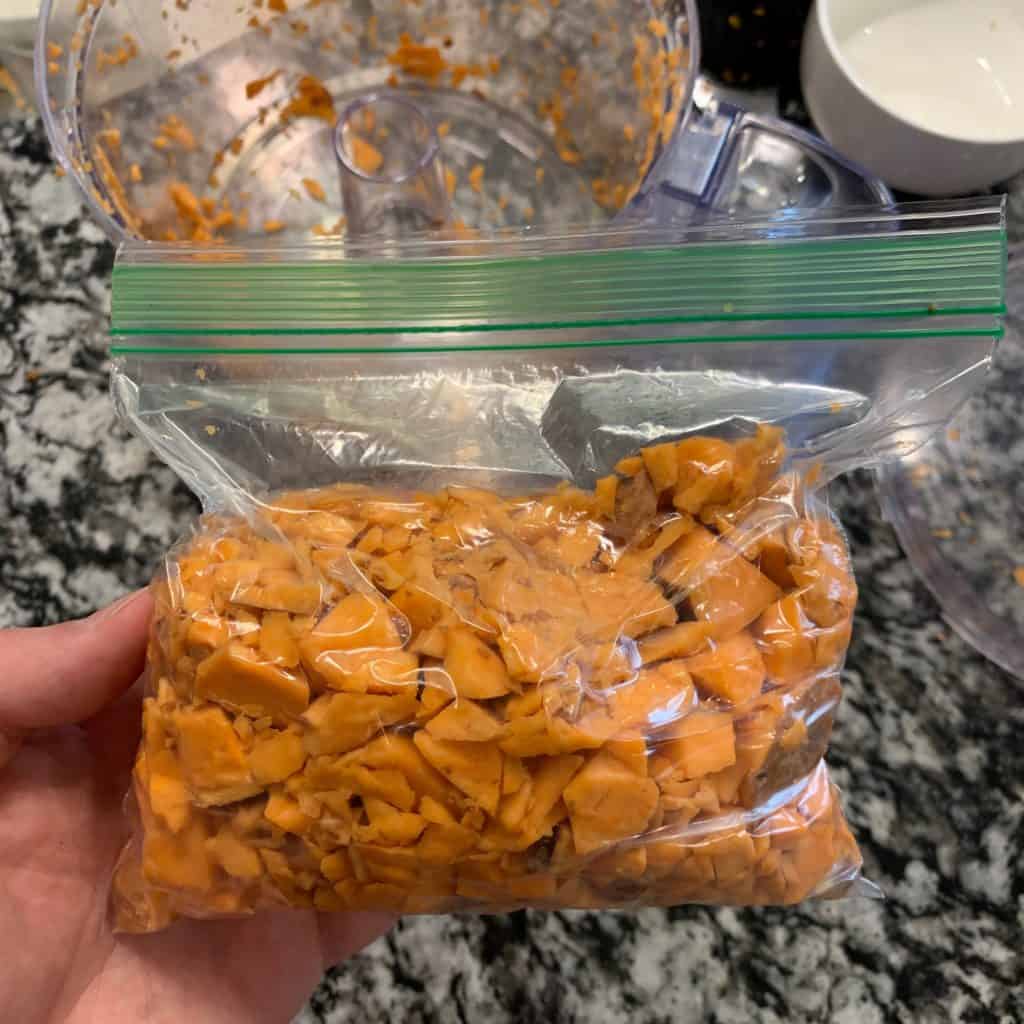 You can cook them from frozen but letting them thaw first is ideal. If you cook from frozen, reduce the heat to medium-low and extend the first stage of cooking (covered) by a few minutes. Then crank the heat up towards the end of cooking for crispy sweet potato hash browns!

Do I have to use the olive oil?

You can swap the olive oil for a bit of nonstick cooking spray to save a few calories and fat. Your hash browns will be a little less crisp, but you’re probably not after diner-style hash browns anyway.

I’ll also add that using the Swerve brown will create a great caramelization on its own. So if you’re using that, you could definitely get away with going oil-free. 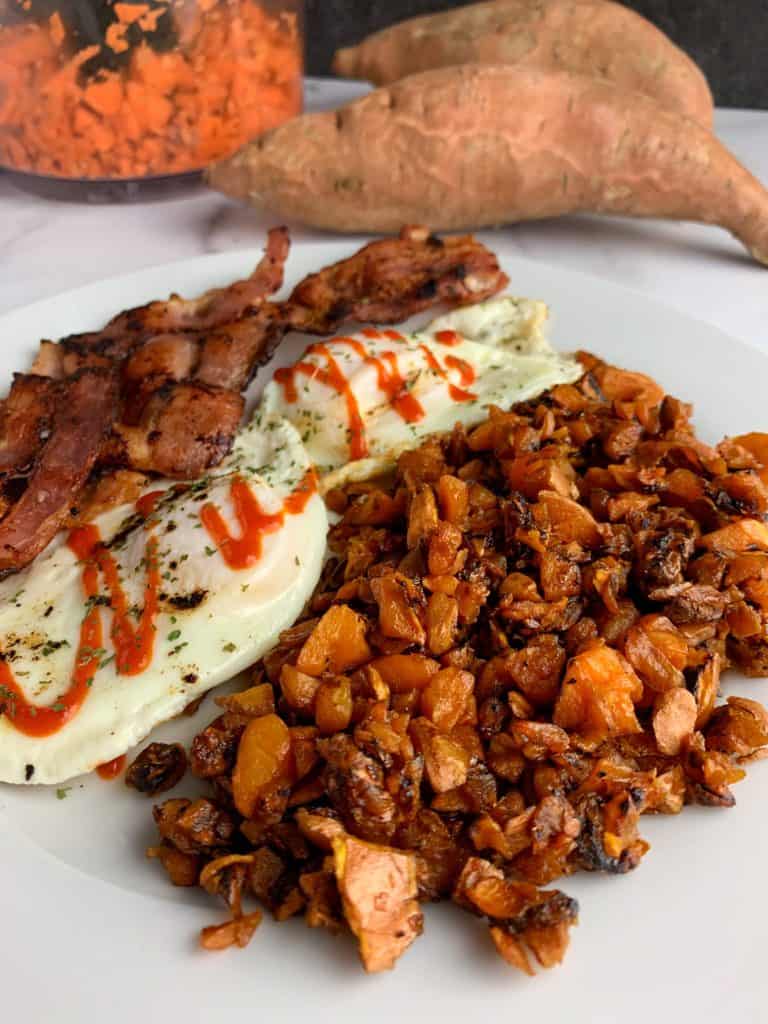 I’ve included a couple pairing ideas below the recipe card, but it’s hard to beat fried eggs and bacon. I like to fry a few slices of bacon before throwing in a couple eggs and covering the pan for a few minutes. This cooks the whites on top quickly but leaves the yolk nice and runny.

You could also serve these hash browns as a side to something like my healthy homemade McGriddles with chicken sausage patties or my simple protein powder pancakes.

Now that we’ve hashed all that out, you’ll find the recipe card below. Be sure to let me know what you think about your new method for sweet potato hash browns. And if you have leftover sweet potatoes, check out my spicy air fryer sweet potato fries!

Reheats well and is very filling. I love this on a saturday morning after a workout with some coffee

Simple but delicious. I ended up with an excess of butternut squash so I did 50/50 sweet potato and squash and made Mason's savory version and also tried it as a sweet version with a bit of cinnamon and pumpkin pie spice and it was super tasty!

I am in love with this recipe!! I paired with the Crescent chicken pot pie and it was a perfect combination! I will also be making for our family holiday breakfast!!