What better way to celebrate my birthday than publishing a new recipe? Especially one as tasty as these birthday cake protein cupcakes.

It may have taken six test batches, but I’ve finally nailed down one of the tastiest birthday cake protein cupcakes I’ve ever tasted. There’s the perfect amount of structure that you’d expect from a cupcake without being super dry like protein cupcakes tend to be. And thanks for the trusty confetti sprinkle, these cupcakes are s’fun!

The flavor and texture of these protein cupcakes is only rivaled by their nutrition facts. Without frosting (I’ll give you a few options for frosting), each cupcake has roughly 9 grams of protein, 7 grams of carbs, and 4 grams of fat. Any cupcake with more protein than carbs should not be this tasty and fluffy. If it’s acceptable to toot my own horn on my birthday, I’d like to exercise that right to the fullest. 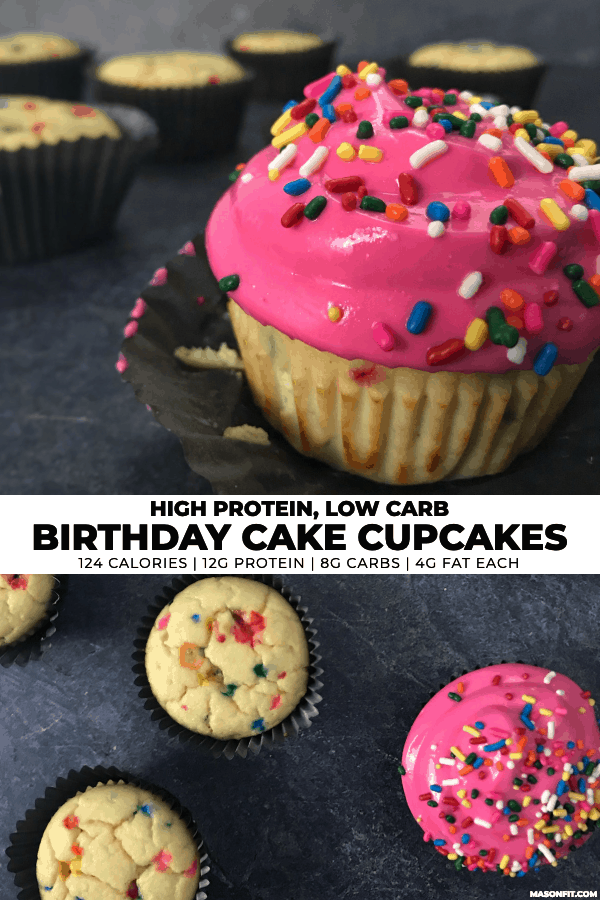 How to Make Protein Cupcakes

As I mentioned above, I tested and retested this recipe about six times. That means if you have a question about ingredient modifications, I’ve probably tried it.

So, I decided to go with the ol’ faithful egg. If you wanted to swap apple sauce for some of the light butter and/or egg, it will work. Just know you’ll likely taste some apple. 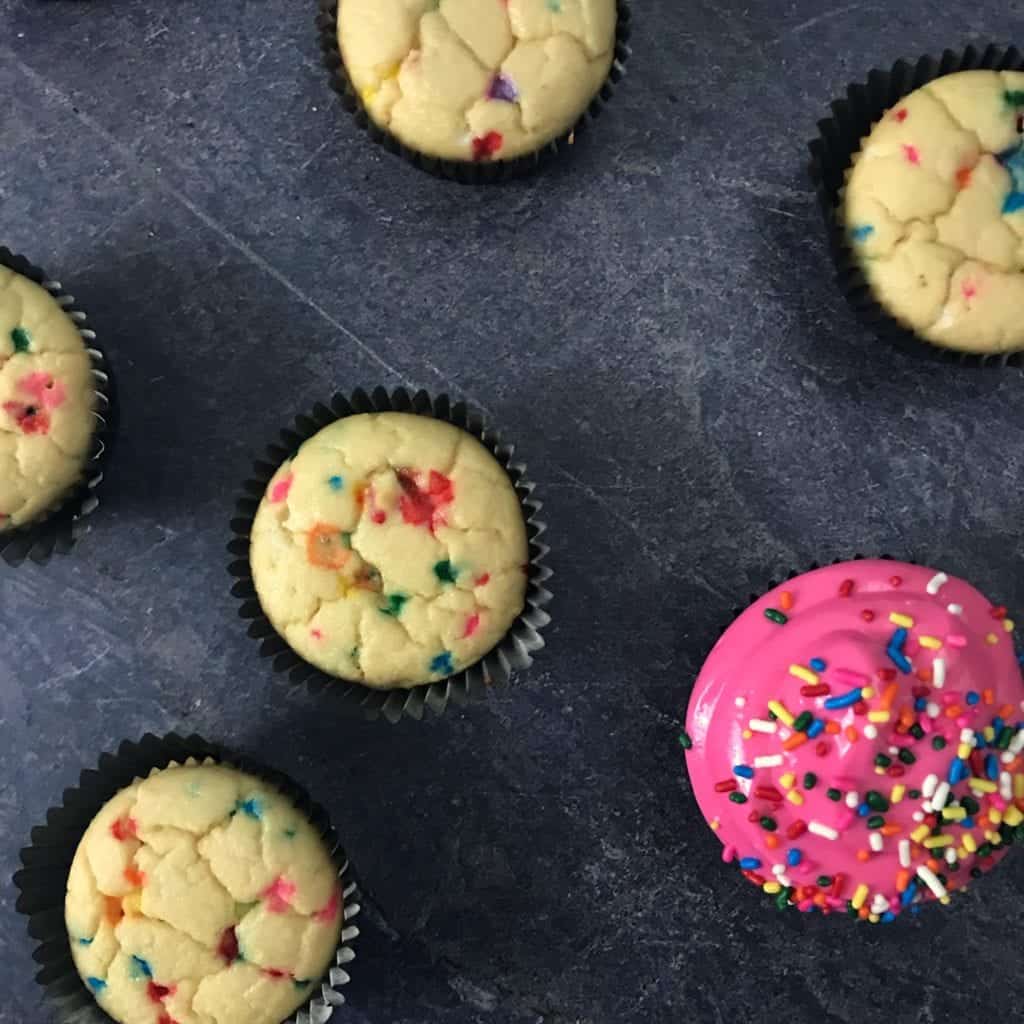 If you’re new to my recipes, I use coconut flour a ton. It’s a super ingredient in my eyes due to its absorbency. You save a ton of carbs and calories since you don’t need much to give baked goods structure. 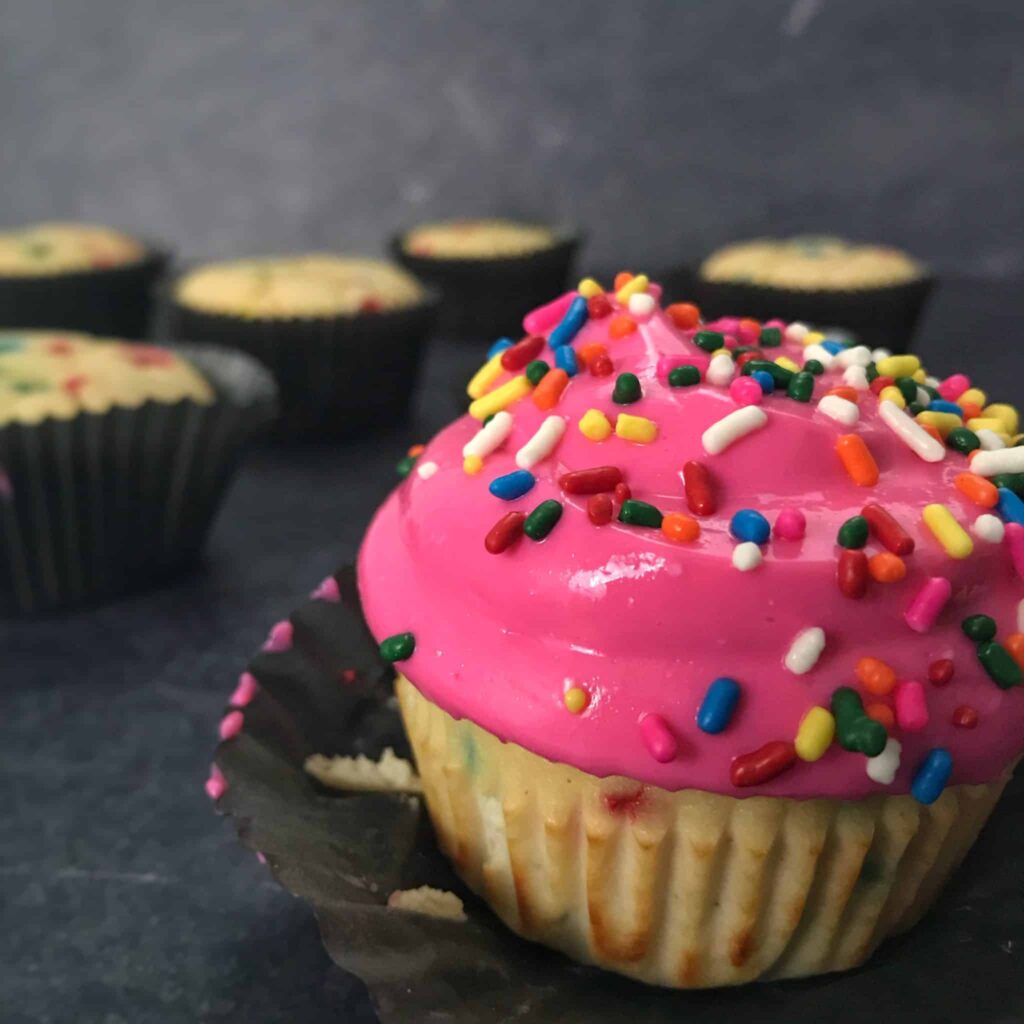 The Best Protein Powder for Baking

I always recommend a whey concentrate or blend of whey protein for baking. They’re typically not as lean as a whey isolate or other isolate proteins, but the small difference in calories and fat content goes a long way in baking. In this recipe, I used the vanilla cupcake flavor of Dymatize 100% Whey which is my go-to for all my recipes. I’m not affiliated with Dymatize, their protein simply tastes amazing and bakes really well.

That said, you can use any protein powder you’d like. If you’re using a plant-based protein powder or an isolate protein, you may want to pull back on the amount used (maybe 2.5 scoops instead of 3) and add 2 tablespoons of all purpose flour to avoid dry cupcakes. You could also add another tablespoon of light butter or another egg. OR you could just make it as-is. There’s a good chance the cupcakes turn out fine. I just wanted to give you a few troubleshooting ideas ahead of time.

Update 3/2019: I’ve added notes to the recipe card below for using Bowmar Nutrition protein powder. If you’re unfamiliar, I’ve since inked a deal as a Bowmar athlete and use their protein powder to make my current recipes like the birthday cake low carb skillet cookie. 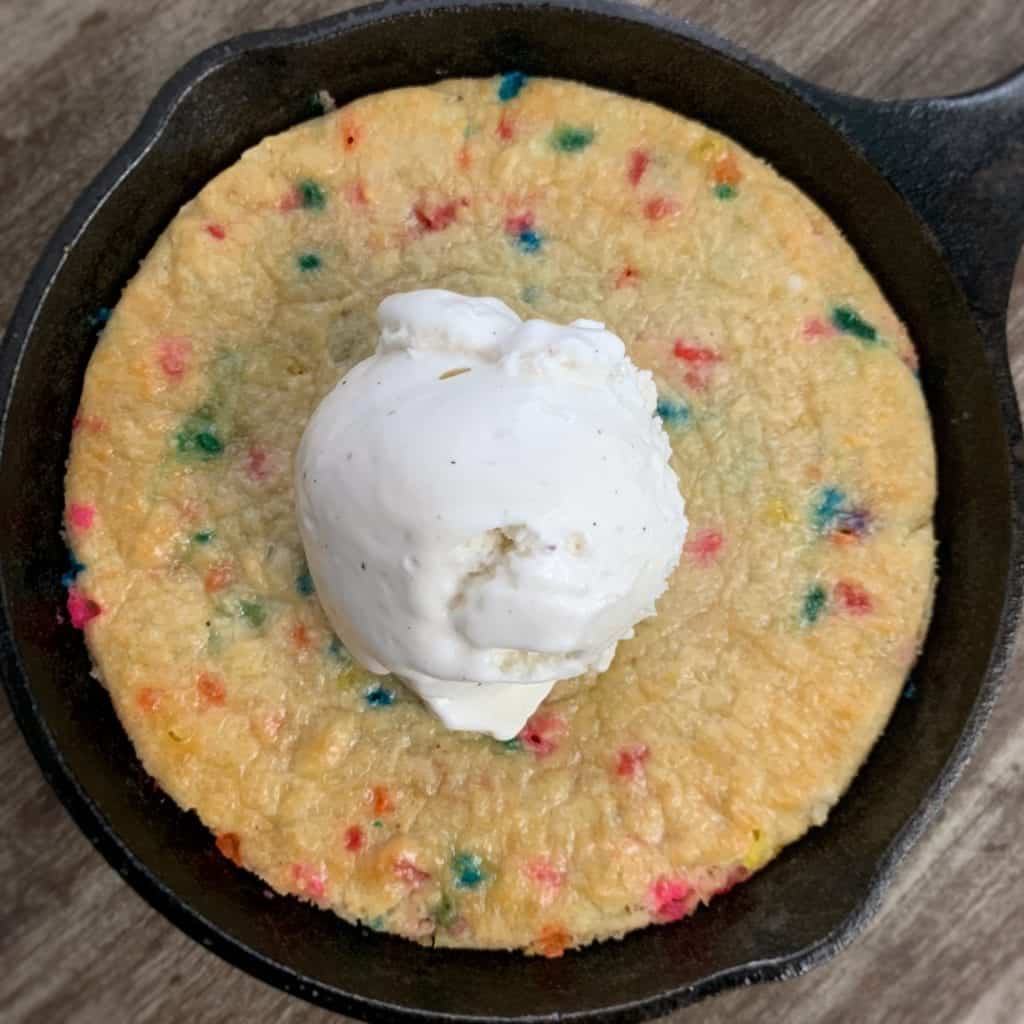 The frosting I used for these protein cupcakes is pretty complex (jk). You’ll need:

That’s it. As you can see in the image below, this frosting is on the creamy/moist end of the frosting spectrum.

If you wanted a more traditional frosting, you could use something like Swerve confectioners (a calorie free sugar substitute). For examples, check out my microwavable protein birthday cake recipe. 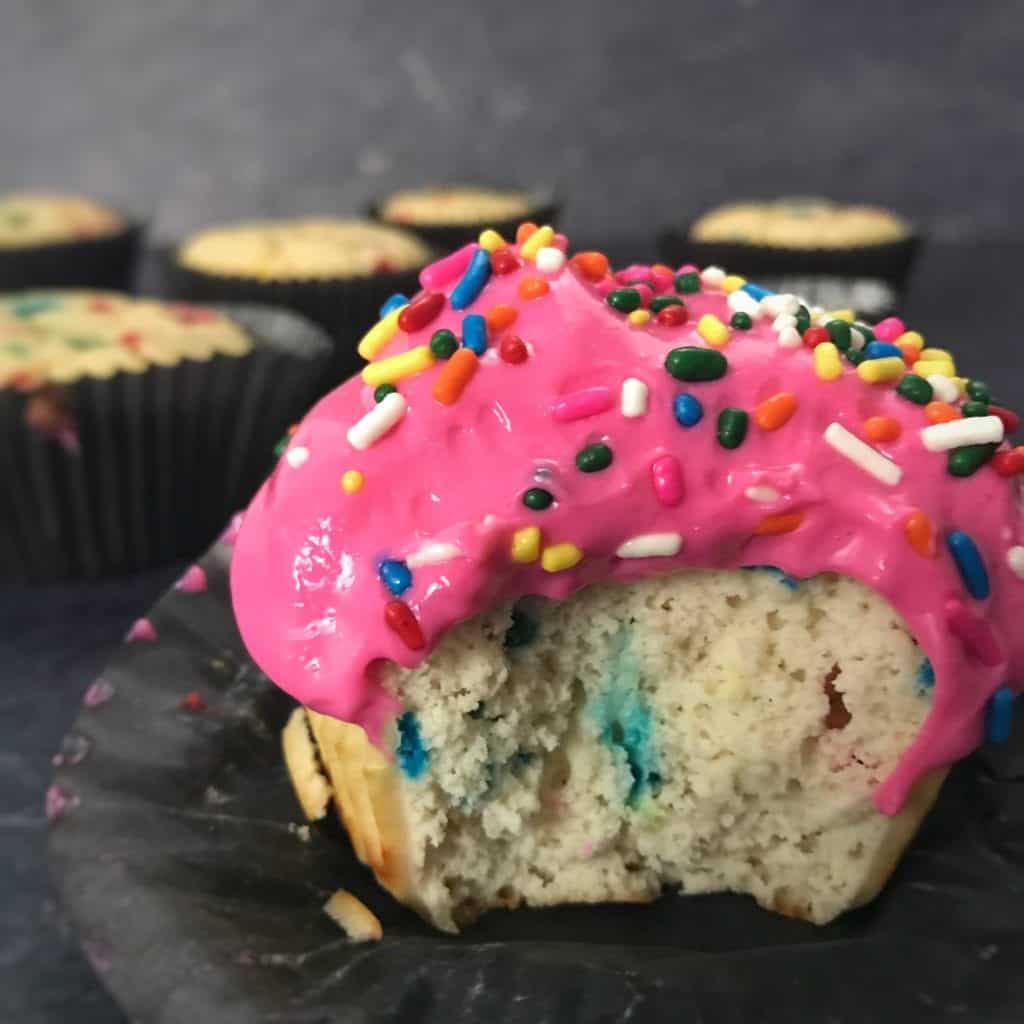 I think that’s all I have for you on ingredient swaps and recipe modifications. Below you’ll find the full recipe. If you try these protein cupcakes, take a pic and tag me in your creation on Instagram. I’ll be sure to share it with everyone. 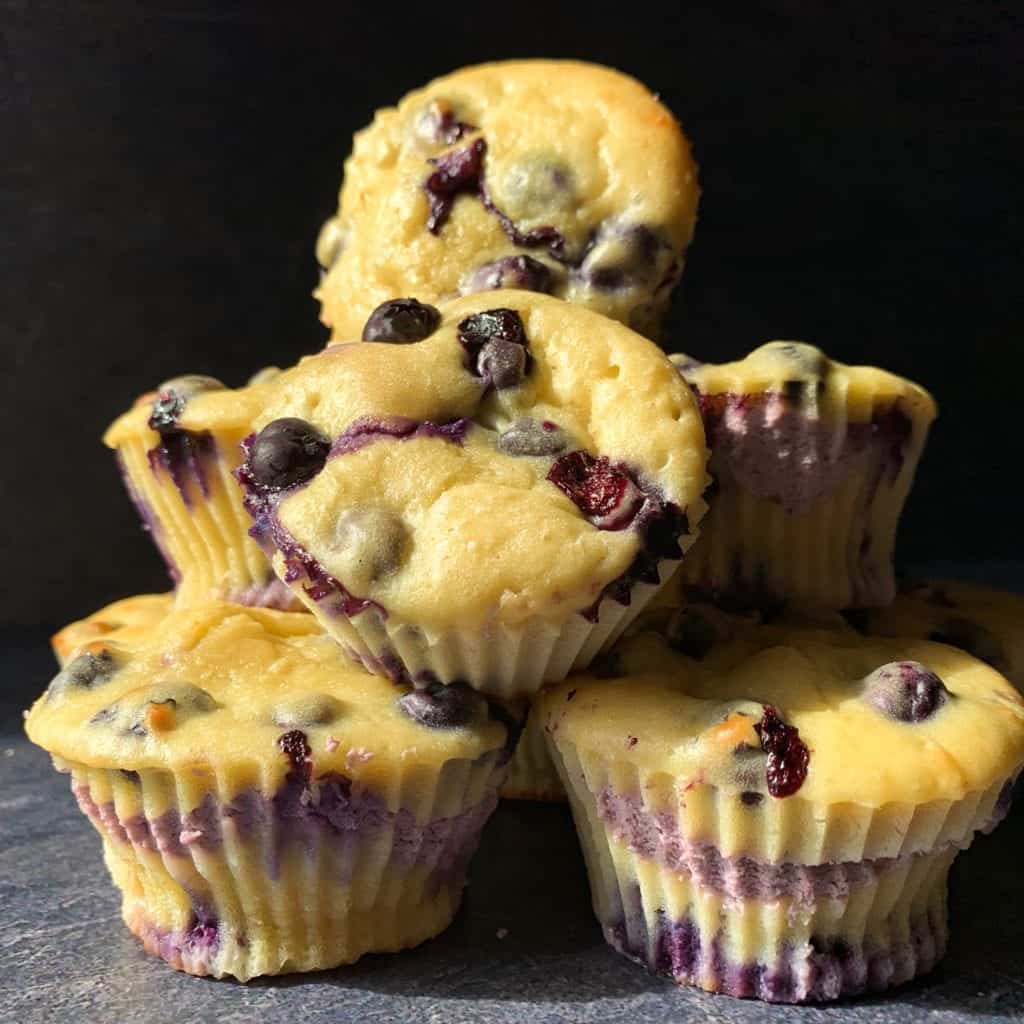 These are so amazing! I just made them they turned out great. I didn't have enough yogurt for the frosting so I made a quick 3 ingredient vegan buttercream. Thanks so much for the recipe, I'll be making these again 🙂

Delicious! I especially loved the frosting. I added a bit of monkfruit sweetener to the recipe because I have a big sweet tooth and added some semi-sweet chocolate chips (instead of sprinkles). The cake part had a different texture than I am used to, but overall was delicious!!

I'm just about to make these cupcakes. I only have Vanilla flavoured almond milk (not unsweetened) would you recommend using this?

These are my favorite sweet treat! I make them into mini cupcakes and pack them for road trips. They're the perfect bite size snack.

I made these with with BN Frosted Cookie protein. As with all of my baking I used real butter rather than light. Very light and fluffy, not dense. My coworkers loved these and I was able to use up some coconut flour that was needing to be used up, win/win!