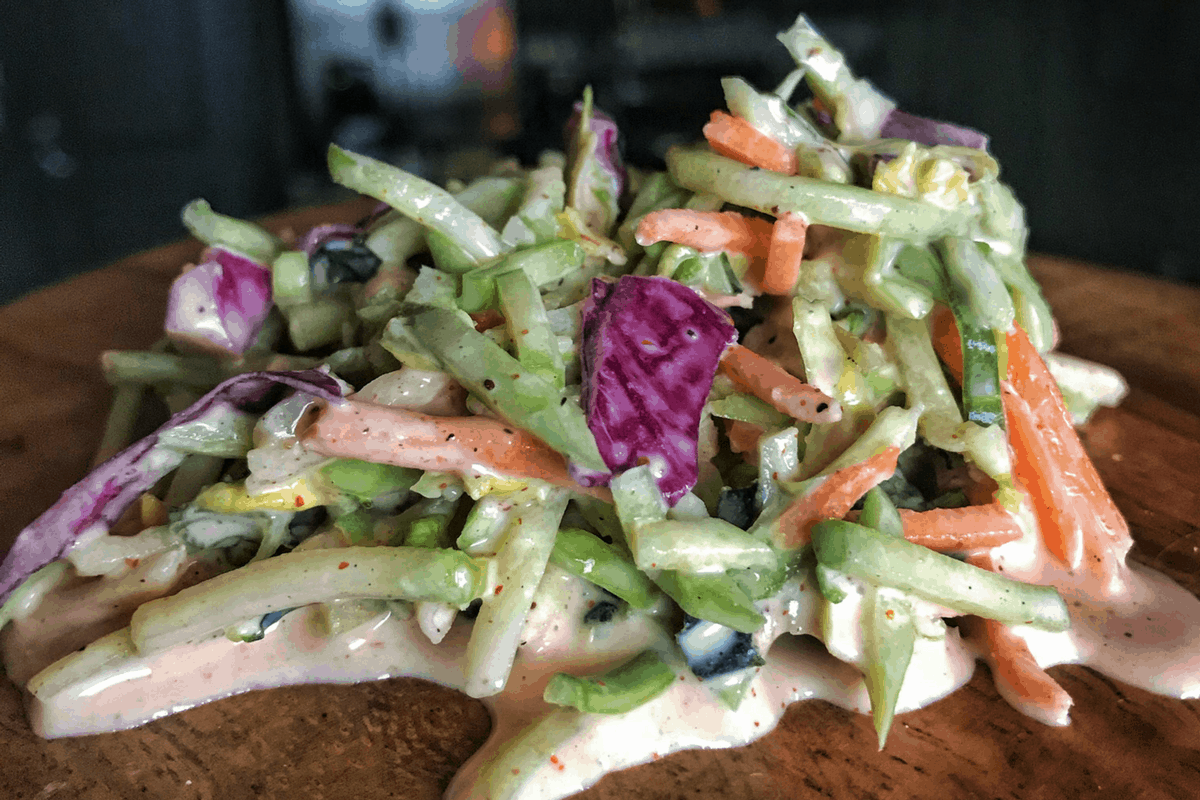 I’m certain coleslaw was on my top 5 least favorite foods of all time for most of my adolescence, despite never actually trying it. As a kid, raw vegetables like cabbage, carrots, and other green things were yucky. And adding them to an unknown white sauce didn’t help. As I evolved, I began eating vegetables of all kinds and even mustered up the bravery to try coleslaw for the first time ever. It was topping a southern-style BBQ sandwich, and it was magical.

This was probably around the time I started paying attention to food and nutrition for performance, and I was saddened to discover coleslaw was actually very high calorie. So, here we are years later and I’m bringing you a high protein, healthy coleslaw recipe that will add a spicy crunch to any meal. While one serving of your average coleslaw has around 200 calories, this entire recipe has 180 calories, 21 grams of protein, and weighs nearly one pound. It’s a high volume eating superstar. 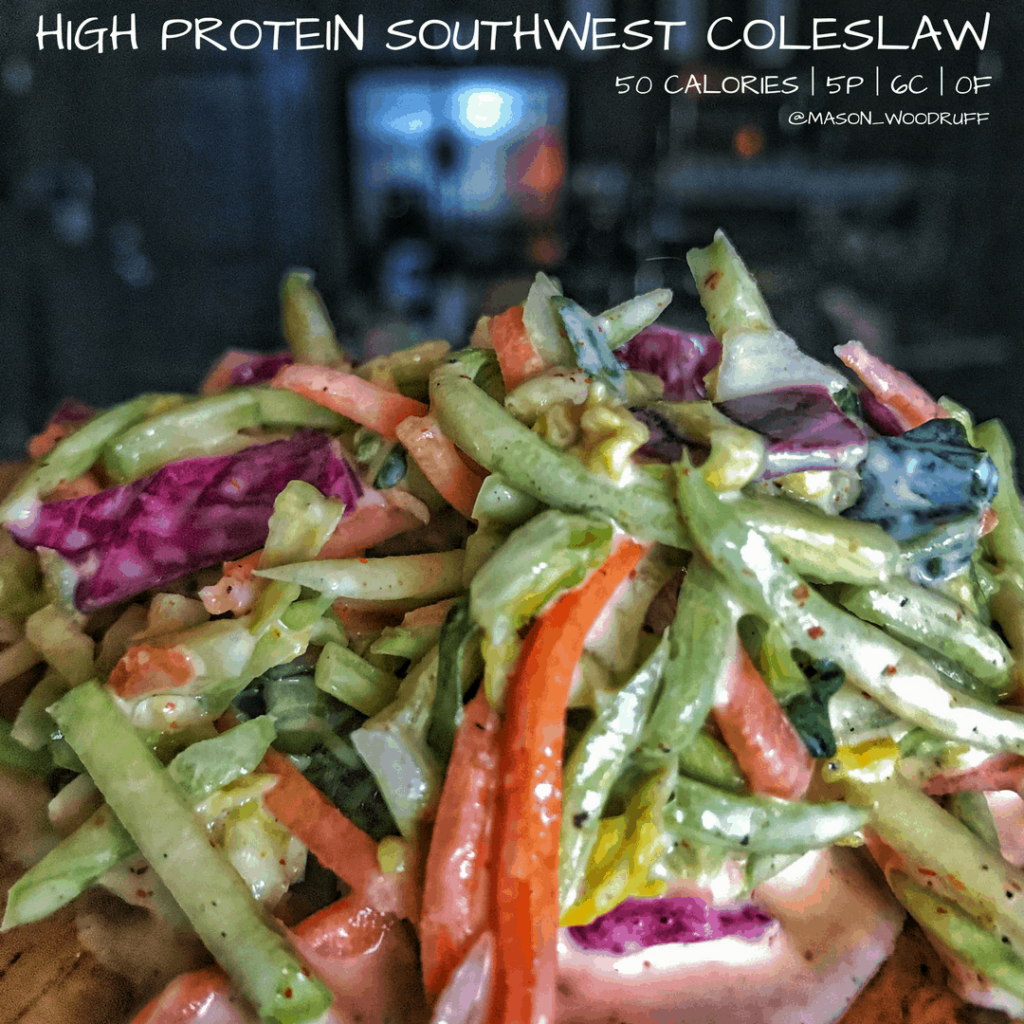 In usual fashion, this recipe is crazy simple and can be prepped and ready in less than 5 minutes. Our core ingredient for the coleslaw sauce will be a usual suspect, Greek yogurt. In addition to the yogurt, you’ll want some type of vinegar, though the recipe calls for apple cider vinegar. This is purely based on taste preference, as the proposed health benefits of apple cider vinegar are predominantly just hype. But that’s a topic for a separate article.

Outside of these two ingredients, your spices can vary based on your preference. Since this is a southwest coleslaw, the recipe calls for a bit of cayenne pepper for a nice spicy flavor. This, along with the chili powder, provides a nice red tint to the sauce as well. At the higher end (1 tsp), this coleslaw is quite spicy, but tolerance to spicy foods varies greatly so you may want to taste test before adding the coleslaw mix to the sauce. 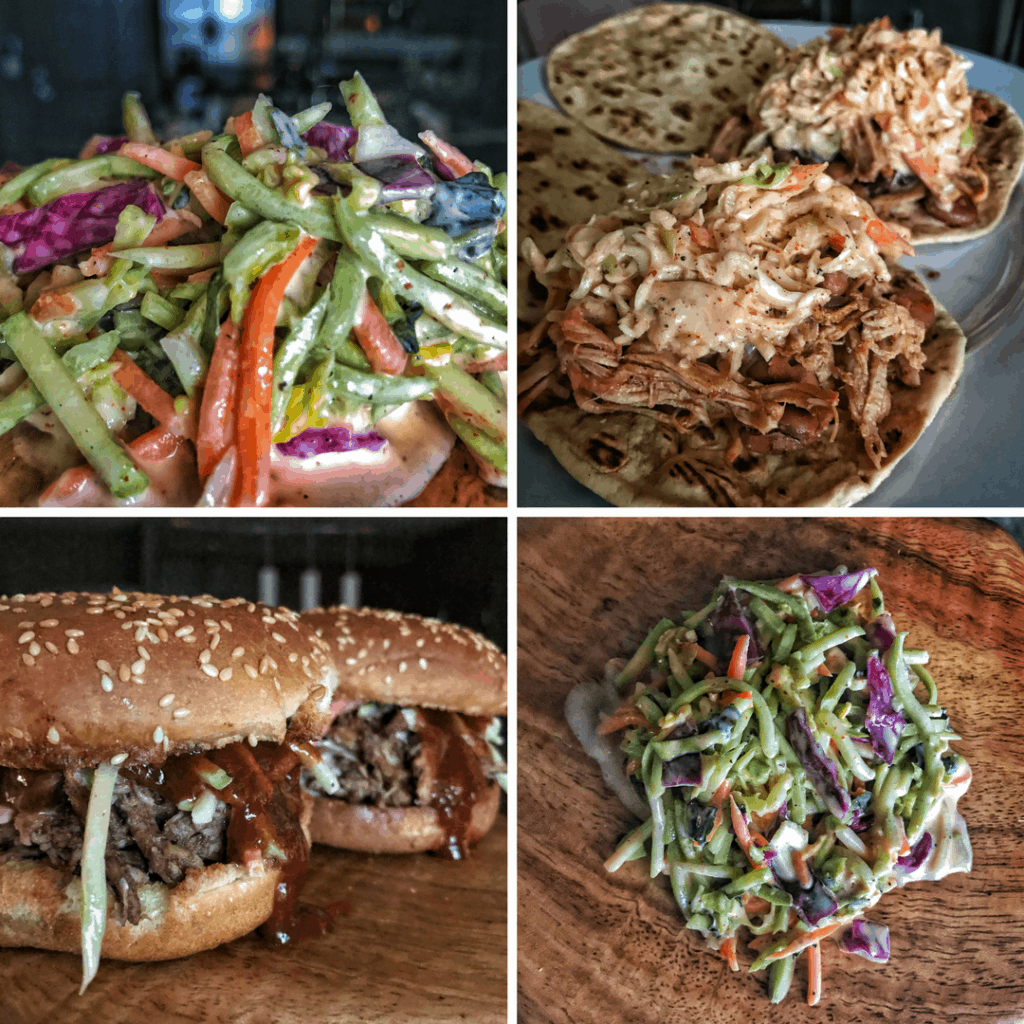 For the coleslaw mix, the recipe calls for bagged or pre-mixed coleslaw. If you want to use fresh sliced cabbage and other veggies, be my guest. If you go with bagged, I recommend mixing a broccoli slaw and super greens slaw together, if you can find the latter. The only other note here would be on the amount of coleslaw you mix with the sauce. I touch on it in the recipe, but you can tweak the amount of coleslaw added to change the level of moisture in your coleslaw. I like a slightly runny coleslaw, and the 8 ounces in the base recipe will create that. If you want a dry coleslaw similar to pickled cabbage, you may want to add 10-12 (or even up to 16 ounces) of coleslaw to the sauce.

Okay that’s a wrap. This coleslaw would go perfectly on BBQ or something like tacos using my Crispy Carnitas or Cilantro Lime Cauliflower Rice and Pan Roasted Corn and Black Beans Bowls. 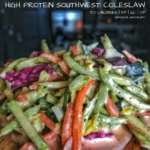 A higher protein, lower calorie spin on traditional southwest coleslaw that's perfect for BBQ sandwiches, tacos, or as a side dish.

Each serving has 0 Smart Points

And as always, if you try any of my recipes, I want to see your re-creations on Instagram. It lets me know you’re putting healthy recipes into action, and I love sharing your recipes to inspire others.