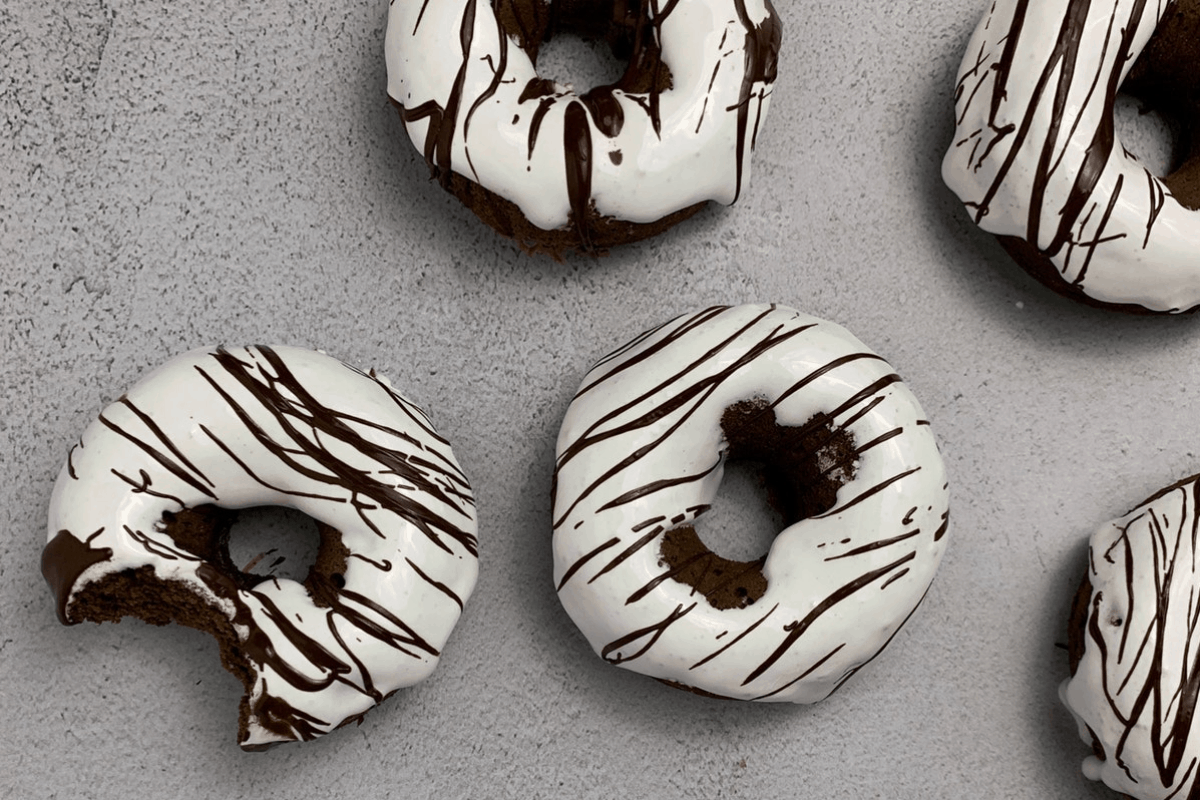 If this is your first time on my blog, I make a lot of protein donuts. Like, a lot. So when I say these hot chocolate baked donuts are one of my best yet, that’s really saying something.

On flavor alone, they’re in the top three, especially with the marshmallow creme on top. But where these baked donuts shine the brightest is their size.

It’s hard to convey size without a side by side, so just trust me when I say they’re two times the size of most other donuts on my blog. 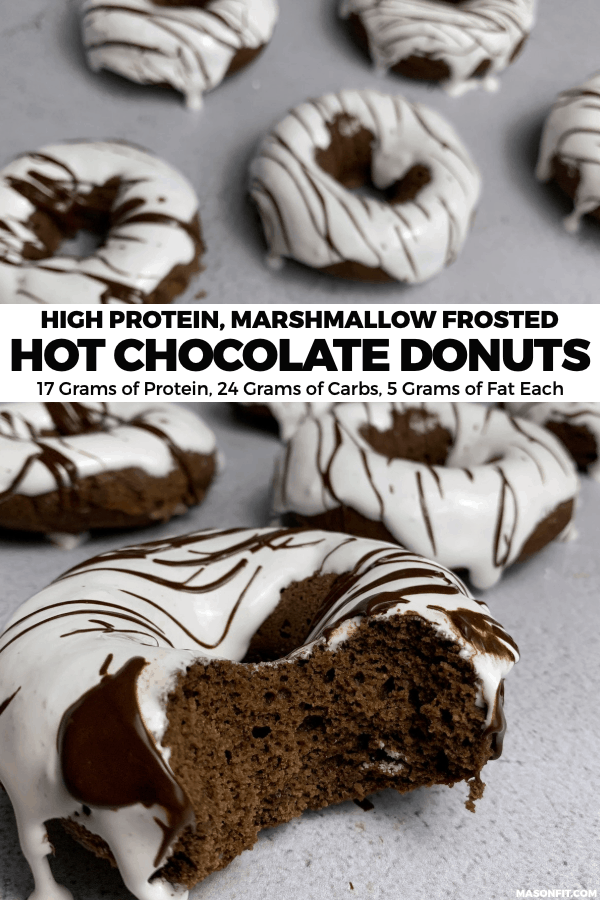 And like Evander Holyfield famously said, “It’s both the size of a donut and the size of its flavor profile that matters.”

I always like to quickly run through the ingredients in a recipe and answer common questions about substitutions or alternative ingredients ahead of time. That said, don’t hesitate to leave a comment at the bottom of this post with any questions you might have. 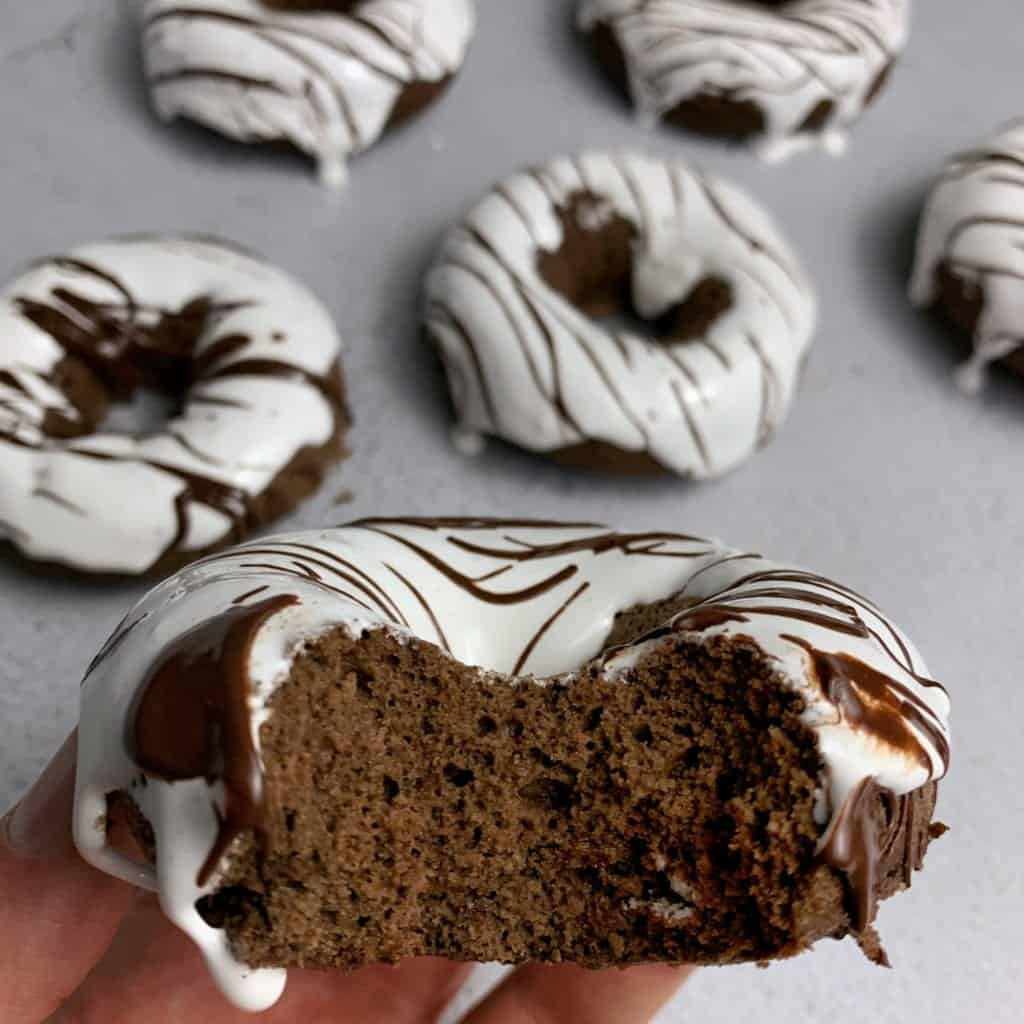 If you’d like to swap one for the other, I typically recommend a 2:1 or 3:1 coconut to all purpose ratio. Meaning, 3/4 cup total of coconut flour or 1-1.5 cup all purpose flour. The photo below should give you an idea of the consistency you’re after. 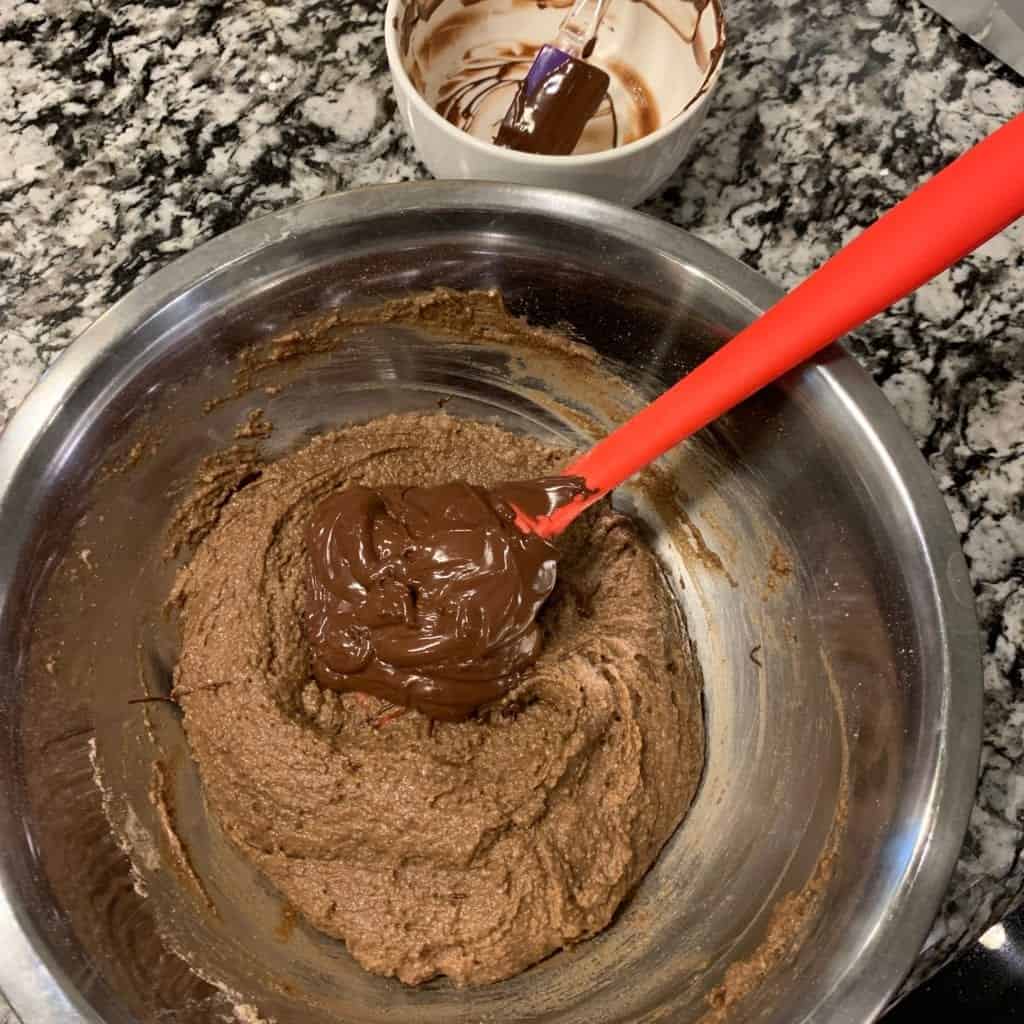 If you wanted to use something like almond flour to keep these chocolate baked donuts gluten free, I’d start by replacing the all purpose flour gram for gram and add as needed.

As you can see above, the recipe will use melted chocolate as part of the liquid ingredients. This is one of my favorite ways to add flavor and moisture to baked goods. The recipe calls for dark chocolate chips but any chocolate will do.

In addition to the chocolate, all you’ll need is an egg and some liquid egg whites. If you’d like extra fluffy donuts, you can swap some of the egg whites for whole eggs.

One large egg is around 70-80 grams. So if you wanted to replace the egg whites entirely, use two eggs. And for half, just one egg. 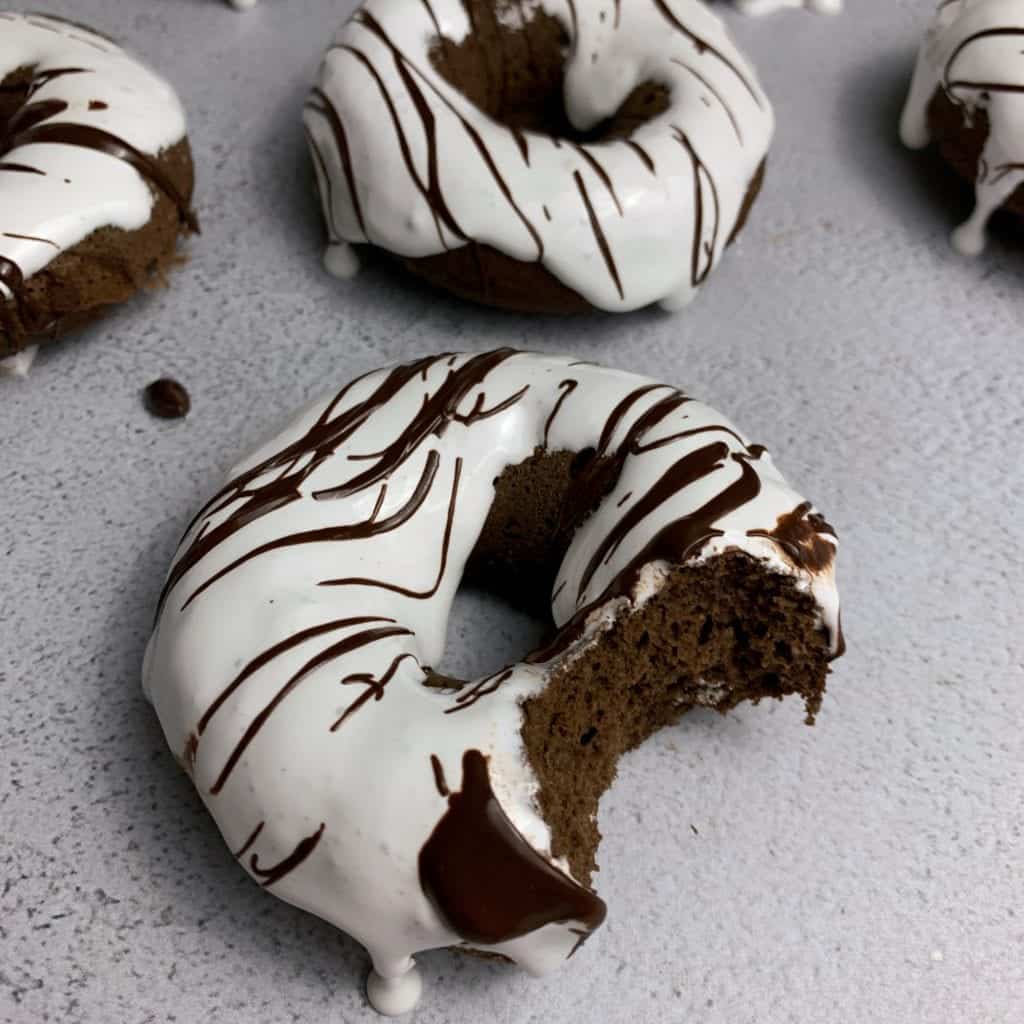 I used Bowmar Nutrition’s Protein Hot Chocolate which is a blend of whey concentrate and whey isolate proteins. One scoop has 112 calories, 22 grams of protein, 2 grams of carbs, and 1 gram of fat for comparison. If you’ve never tried this protein powder, it’s one of the best tasting and mixable powders I’ve ever tried. 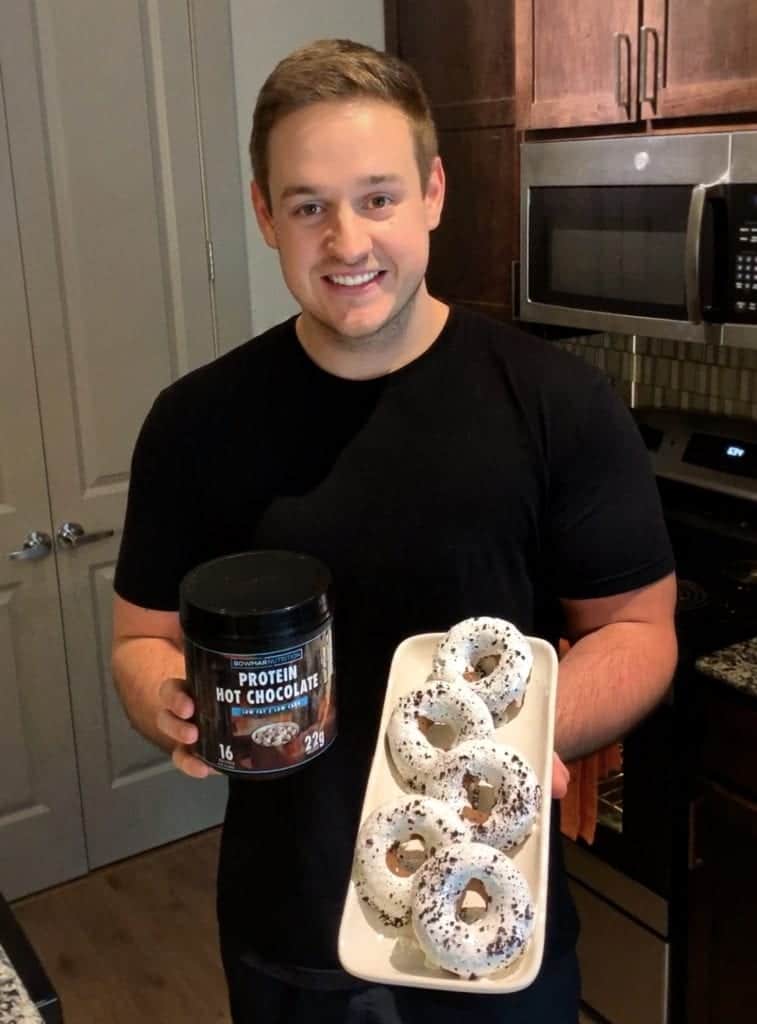 It will seem a bit thick when you’re first spreading it on the donuts but it smoothes out on its own after you spread it around. (See the photo below – bottom vs top donut.)

Also, the amount in the recipe is for a calorie conscious amount. If you wanted to go all out, I wouldn’t judge you! 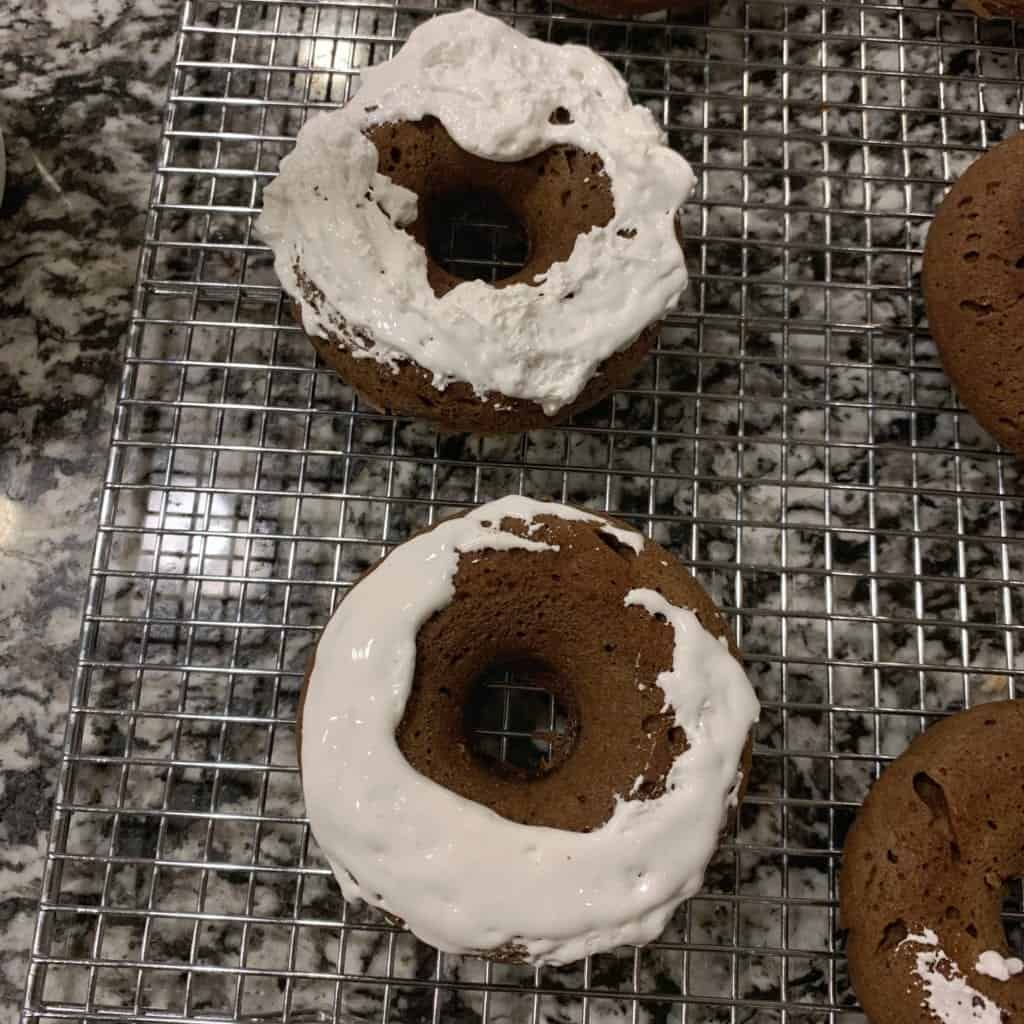 And that’s about it. If you make these hot chocolate baked donuts, I’d love to see ’em. Snap a photo and tag me on Instagram @mason_woodruff or join my free Facebook group and share it with the Proton Party. 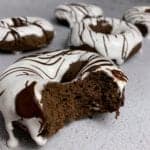 A recipe for huge chocolate donuts covered with marshmallow creme.

One of my perennial favorites is my Cap’n Crunch Berries Protein Donuts recipe. They’re made with crushed Cap’n Crunch and real berries! 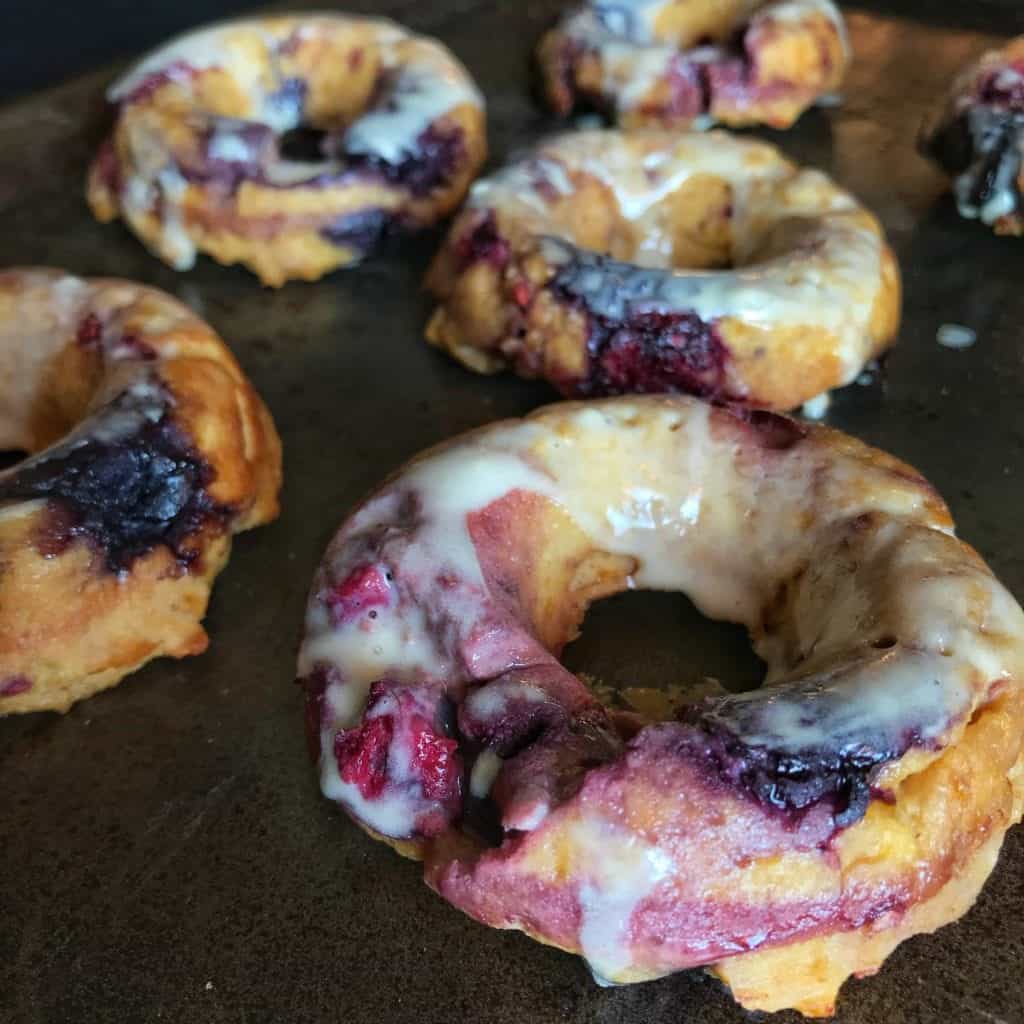 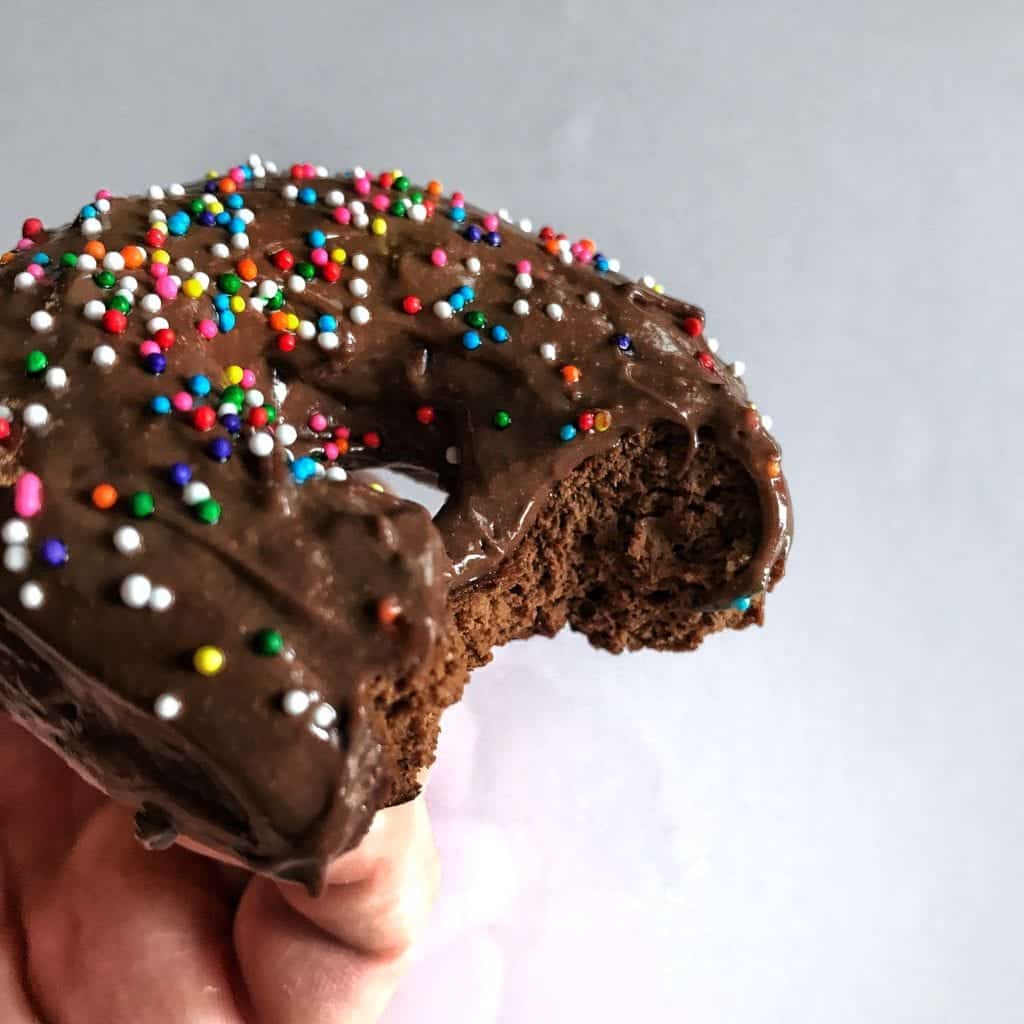