Before we dive into this recipe, I’d like to issue a rather serious warning. As you may know by now, this blog is focused on making lower calorie, healthy recipes. That’s why it’s super important you refrain from eating out of the cereal box while making these Cinnamon Toast Crunch Protein Donuts. Okay, maybe my warning isn’t that serious.

Still, Cinnamon Toast Crunch is delicious, and I think we can all agree it’s better without milk. You could really go overboard with a handful here and a handful there while your protein donuts are in the oven. I would recommend measuring or weighing out this particular ingredient, closing the box, and putting away before you start anything else. Or even better, if you can find a smaller box or even the individual boxes, the temptation will be gone altogether. 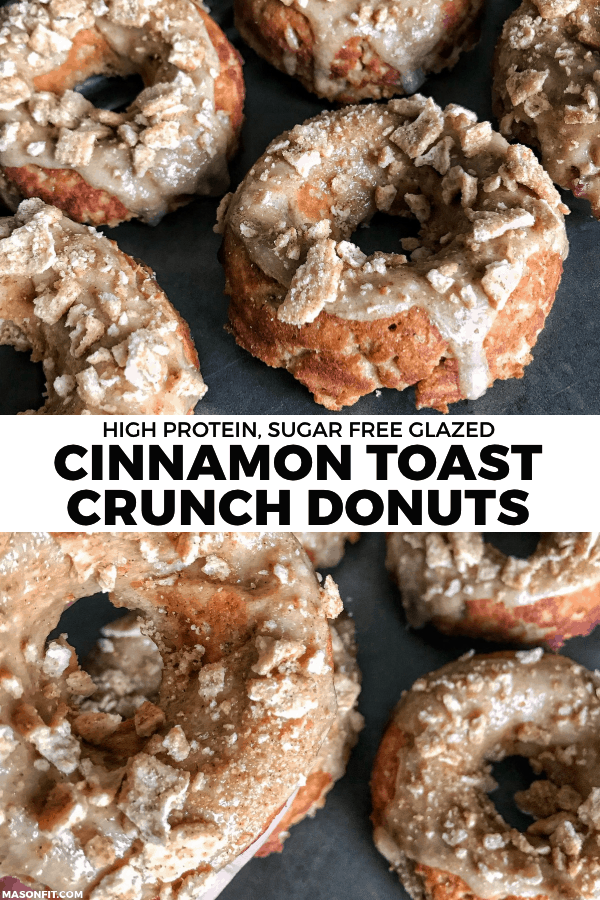 This may seem like an odd way to introduce a recipe, but it’s important to acknowledge that healthy or lower calorie foods can still be fun as long as you’re able to practice moderation. If you end up eating an entire box of Cinnamon Toast Crunch, you may as well go to Krispy Kreme.

I’m definitely not speaking from experience here, only telling the story of a friend. Wink wink.

Yep, similar to the Crunch Berries Protein Donuts, we’ll be blending up Cinnamon Toast Crunch and packing it directly into donut form. That’s cool but what’s even cooler is that I’ll be dropping a few notes below on how to substitute some of the Cinnamon Toast Crunch for our second base ingredient—coconut flour—to reduce the calories in this recipe if you need to. 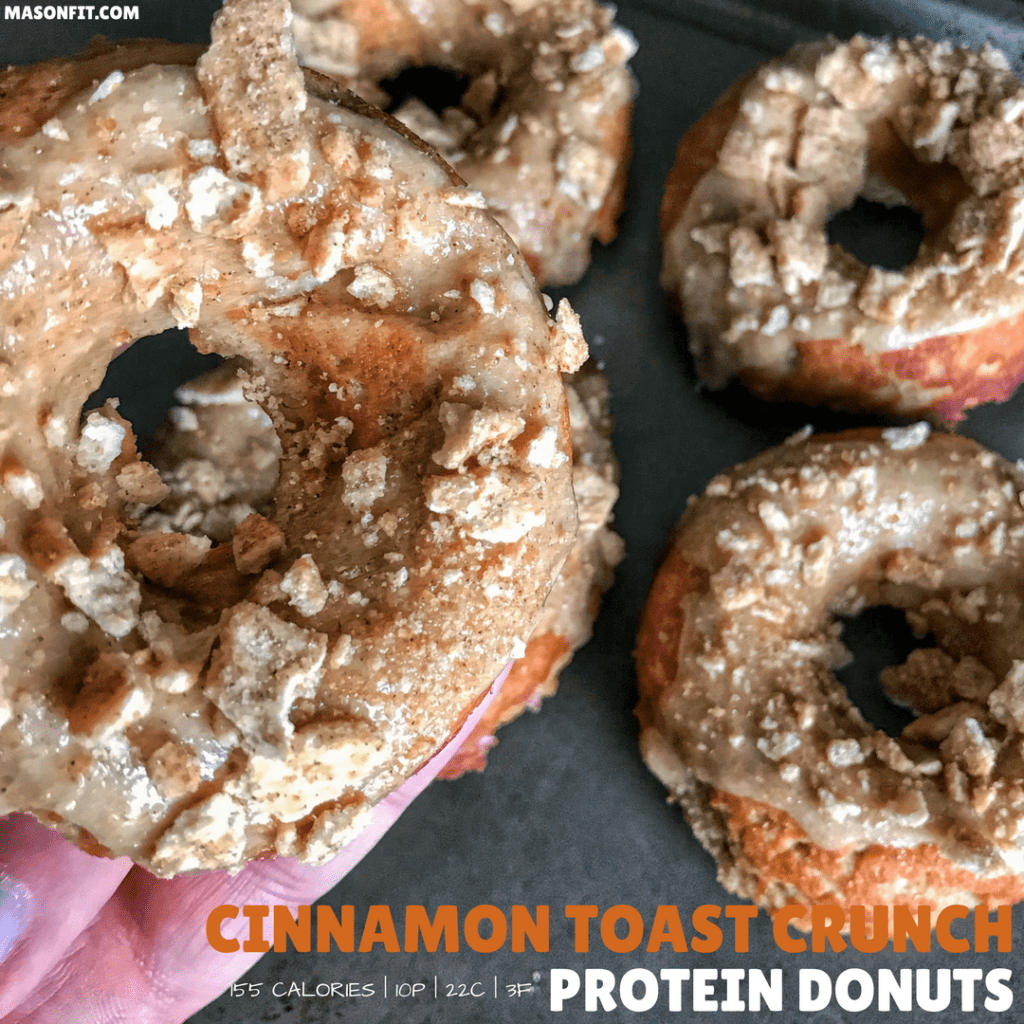 Coconut flour is an ingredient I was late to the party on, for whatever reason. If you’re unfamiliar with my recipes, I do my best to keep things as simple as possible. And coconut flour seemed like this complex ingredient.

False. It’s super accessible, delicious, and unique for baking. Since it’s so absorbent, you don’t need much to get the desired effect of flour, allowing you to save calories! 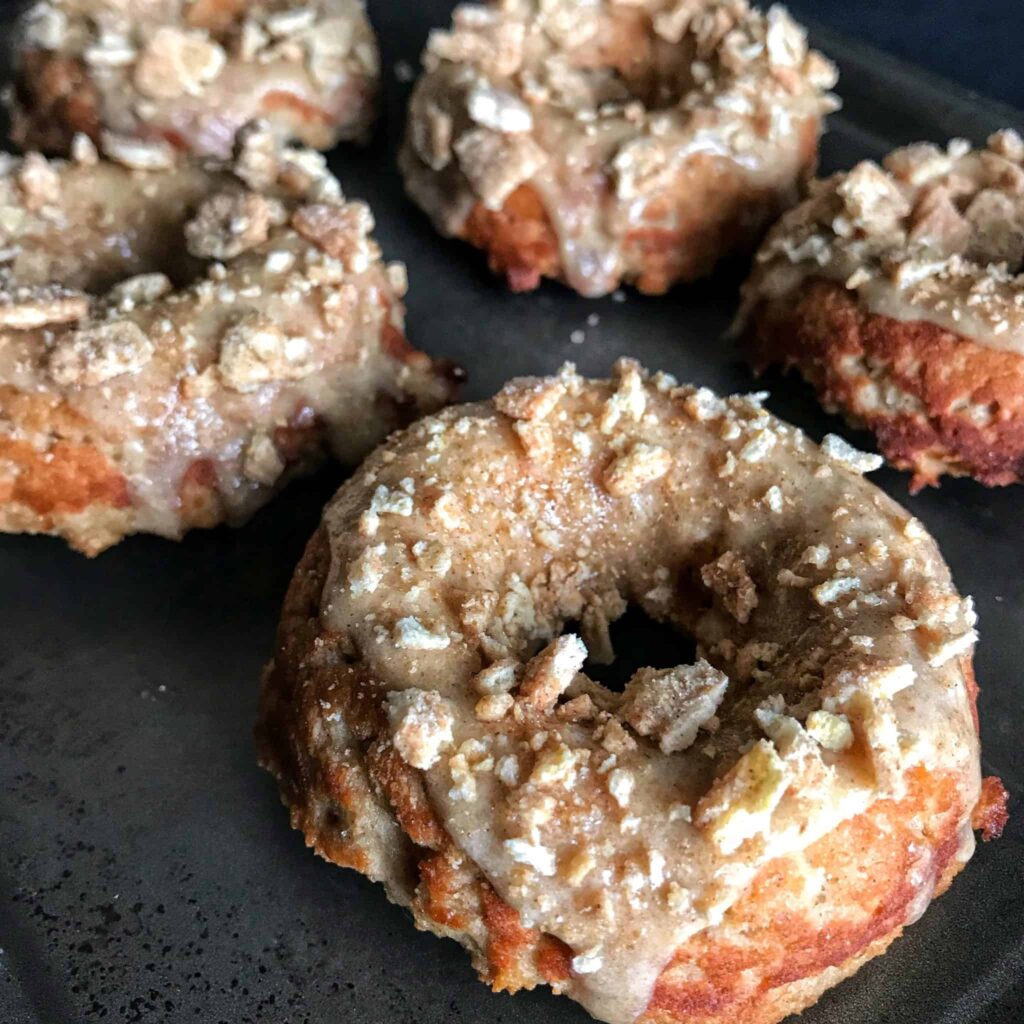 Outside of the flour and cereal, the remaining ingredients are pretty basic. I’ll touch on protein powder recommendations and ways to avoid tough or dry donuts below, but that’s about it for ingredient notes.

As far as kitchen tools go, you’ll need a donut pan and food processor or blender to crush the Cinnamon Toast Crunch and for the powdered sugar replacement to make the donut glaze. Any donut pan will do, but you can get the one I use on Amazon here, and you can get the food processor I use here. Both are more than affordable and great additions to your cooking arsenal.

I realize 152 calories is still pretty solid for a donut but if you’d like to reduce the calorie count, you can try replacing 3/4 C (31g) of the Cinnamon Toast Crunch with an additional 2 Tbsp (14g) Coconut Flour. Since coconut flour is much more absorbent, you shouldn’t need to reduce liquid ingredients. This would save 70 calories on the entire recipe or around 12 calories per donut.

One common calorie culprit in traditional donuts is the glaze. Up until the Crunch Berries Protein Donuts, I’d failed at replicating a powdered sugar-based donut glaze. This will be the same lower calorie glaze that I used in the Crunch Berries recipe but with a bit of cinnamon added. If you have the calories and carbs available, you could try adding 1/2 C (20g) Cinnamon Toast Crunch to the blender for an extra thick glaze. 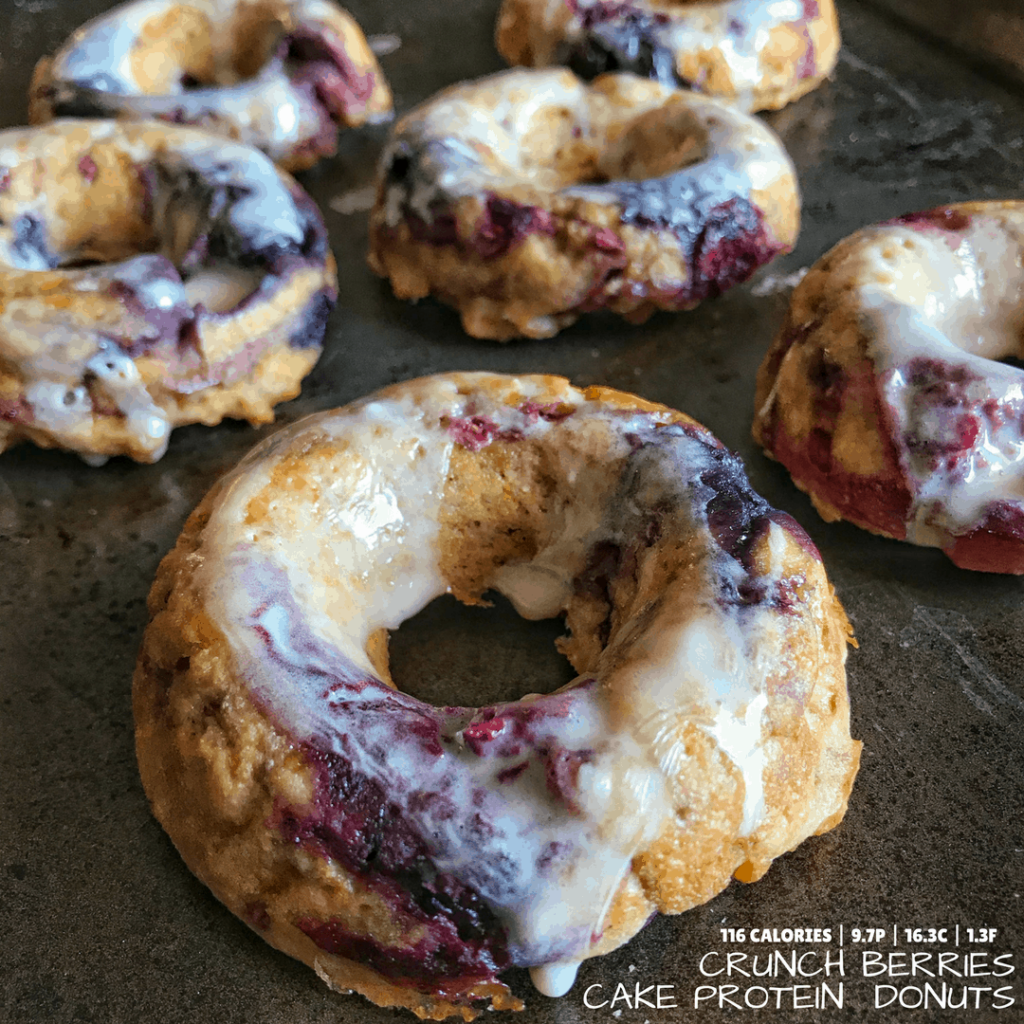 Here’s what you’ll need for the sugar-free powdered sugar:

To make the donut glaze, blend the dry ingredients for 30-60 seconds. You can hand mix, but I’ve found it doesn’t reach the same level of powdered sugar-ness. Once you’ve got your powdered sugar replacement, simply mix with your choice of milk and stir. Pour or spoon the glaze on top of the donuts and give them 1-2 minutes to set.

If you’ve seen any of my recent recipes, you know I love my Swerve Confectioners. It’s a calorie free powdered sugar replacement that I’ve used in recipes like pumpkin banana bread protein muffins and apple pie baked oatmeal cups. 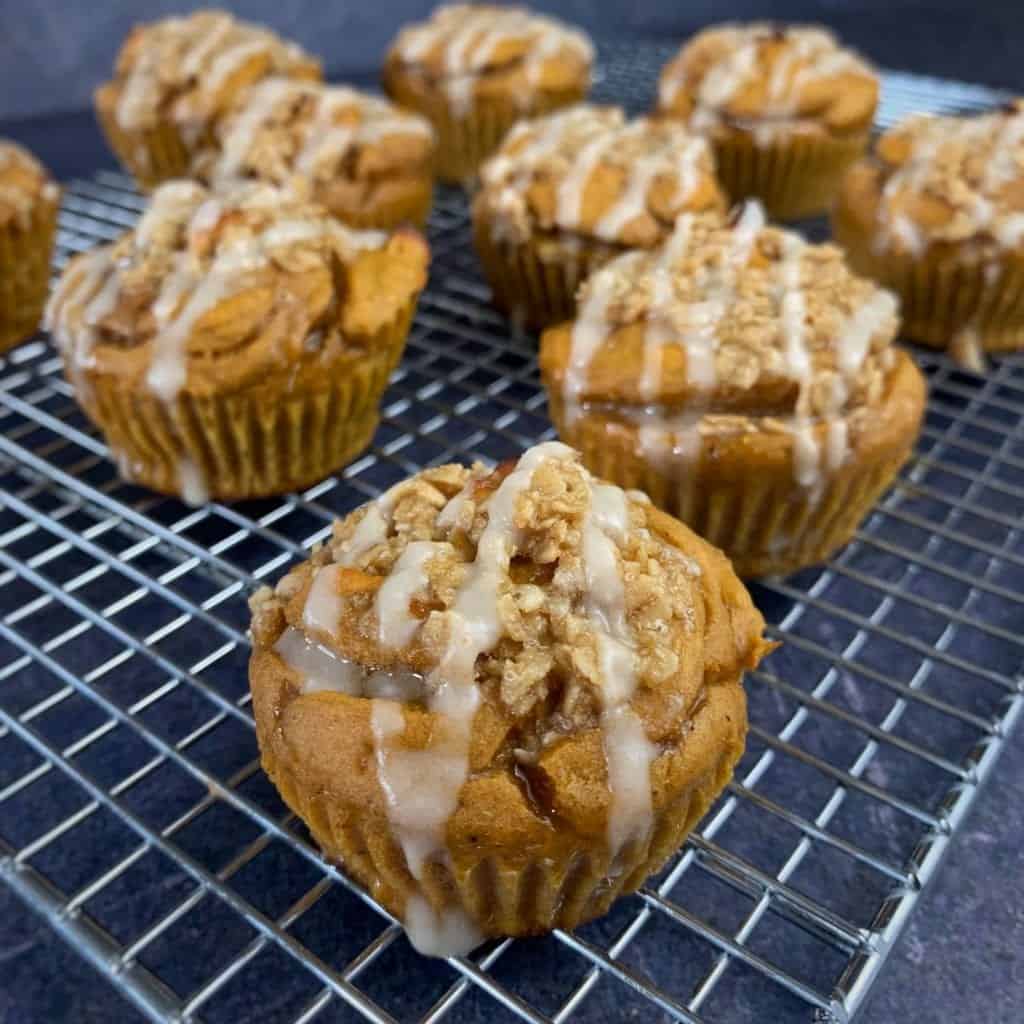 I’ve been adding this quick blurb to most of my protein-based desserts to troubleshoot some of the most common issues. Since there are a lot of moving parts in recipes with protein powder (different types of protein, volume differences in scoops, scooping vs weighing accuracy, etc.), there’s always a chance you’ll end up with a tough or dry finished product. I’ll include a few ideas to combat this below:

Life’s too short for dry protein treats. I hope this helps!

Keep the protein donut train rollin’ with my Cap’n Crunch Berries Protein Donuts. Just like these Cinnamon Toast Crunch donuts, they’re easy to make and pack the greatness of the Cap’n in an easy to transport protein donut with real berries. Ya know, for health and stuff.

And if you’re looking for more protein donut recipes, I know a guy. 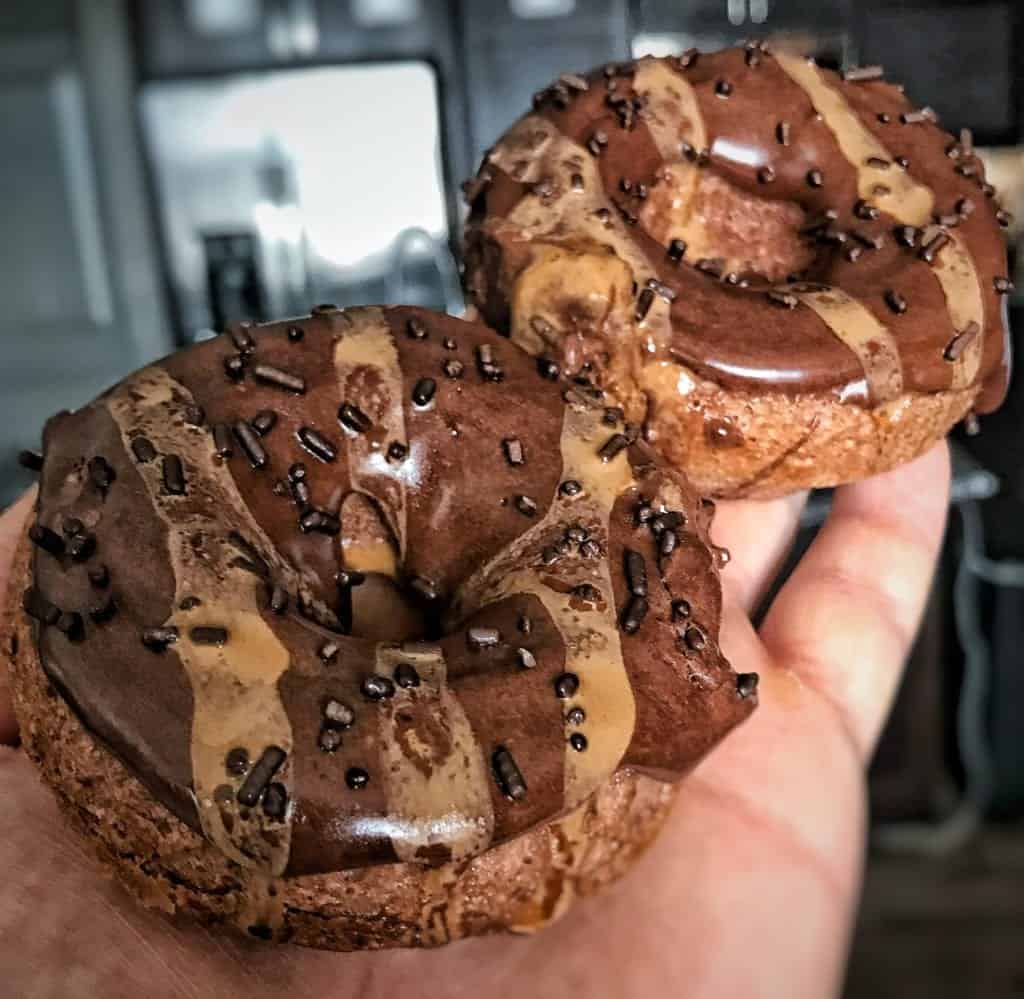 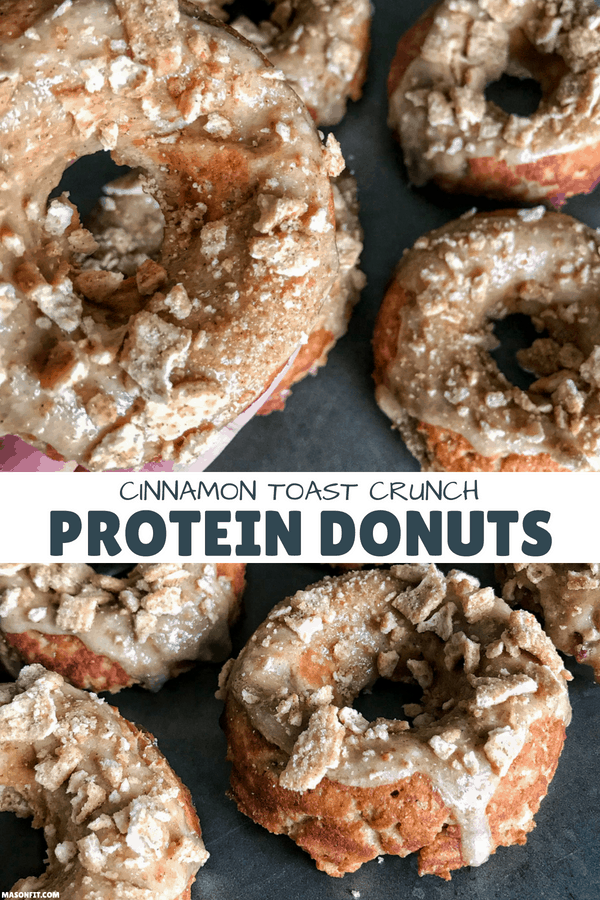